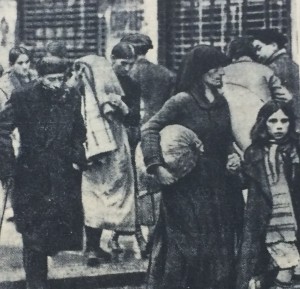 Over days and weeks in May 1937, a group of Newcastle cargo ships steamed out of Bilbao, their decks crowded with refugees. They were taking part in a massive rescue scheme for Basque civilians during the Spanish Civil War.

Starving refugees, like these pictured in the North Mail of April 26th, had flocked into the port of Bilbao from surrounding areas as General Franco’s Nationalist forces advanced and bombing raids intensified. Following the destruction of Guernica on April 26th, and the fall of the key defence town of Durango, near Bilbao, two days later, thousands more refugees thronged the roads to the port city.

A Basque representative appealed for help on April 29th, fearing a mass raid like the one that had flattened Guernica on April 26th:

The food situation is acute, and the wharf is crowded with children begging the crews of British ships for food.

The air-raids in Bilbao were the worst danger for British ships, the captain of the Wear steamer Coquetdale told the North Mail:

…one never knows whether a bomb is going to drop on the docks. Then it might be finish for us. Thirty aircraft, most of them three-engined machines, dropping a rain of bombs, weighing a quarter of a ton each, and wreaking havoc among the suburbs of the city….It gets on your nerves

Both the Coquetdale and her sister ship Brinkburn had carried food from Antwerp to Bilbao. Captain Charles Smith of the Coquetdale was speaking to the North Mail when the ship arrived at Tyne Dock on April 21st, following the trip back with iron ore from Bilbao. Captain Smith was ready to load coal for a return voyage to Bilbao, though taking on some new crew members to replace those who didn’t want to return to the war zone. Crew and ship are pictured below. 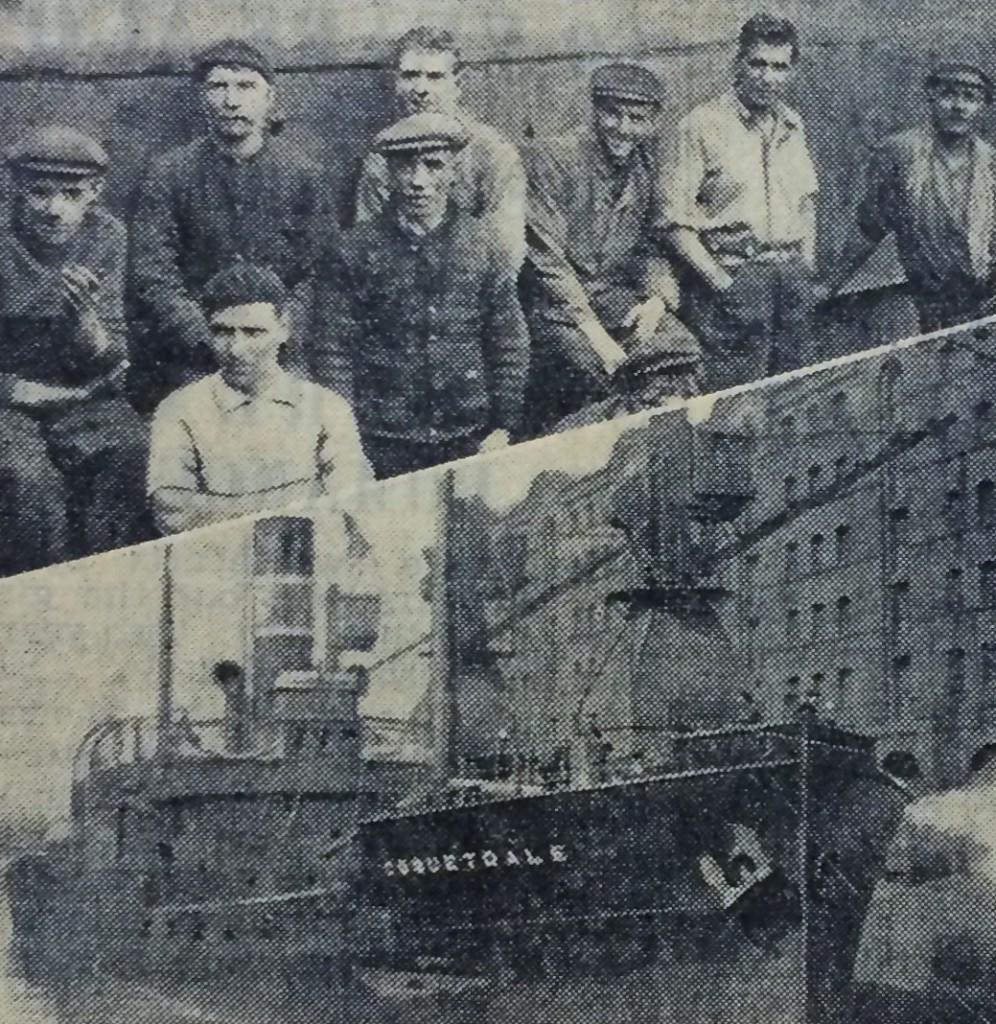 Foodships had been chartered by the Basque government to run the Nationalist blockade into Bilbao. From April 25th to 29th, the freighters arriving in Bilbao included the Newcastle ships Hamsterley, Backworth, Backhill, Sheaf Field, and Sheaf Garth. The North Mail reported that the Newcastle steamer Stesso had also got through carrying coal. Not all the ships were successful, however. The Newcastle steamer Greathope couldn’t get past the Nationalist ships blockading the port and had to turn back to Gibraltar.

The Newcastle ship Backworth made the nerve-wracking approach to Bilbao on April 28th.  On board was the North Mail special correspondent Edward F. Balloch, who radioed back to the newspaper office from the ship: 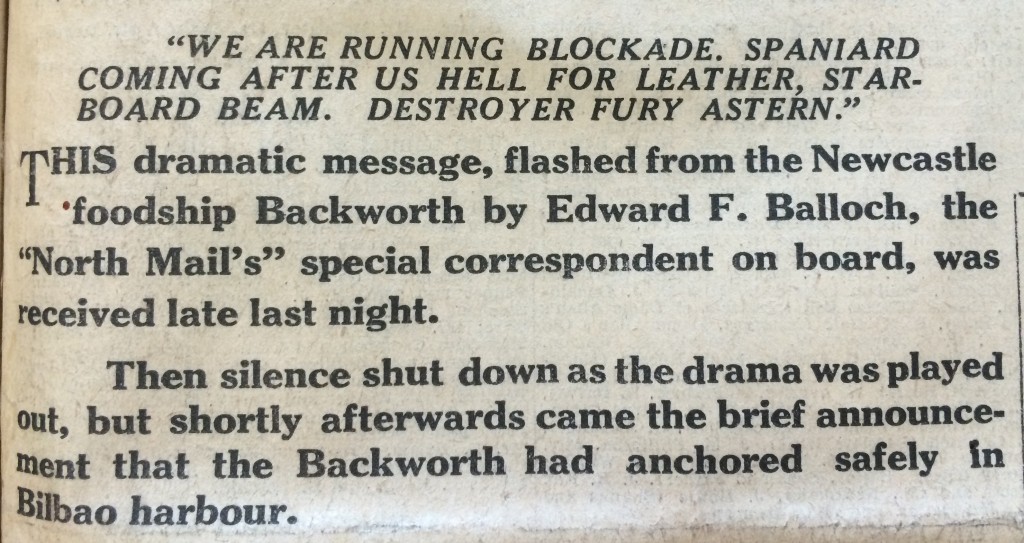 Once the Backworth was safely docked, Edward Balloch radioed further details of the high-speed and risky approach into Bilbao: 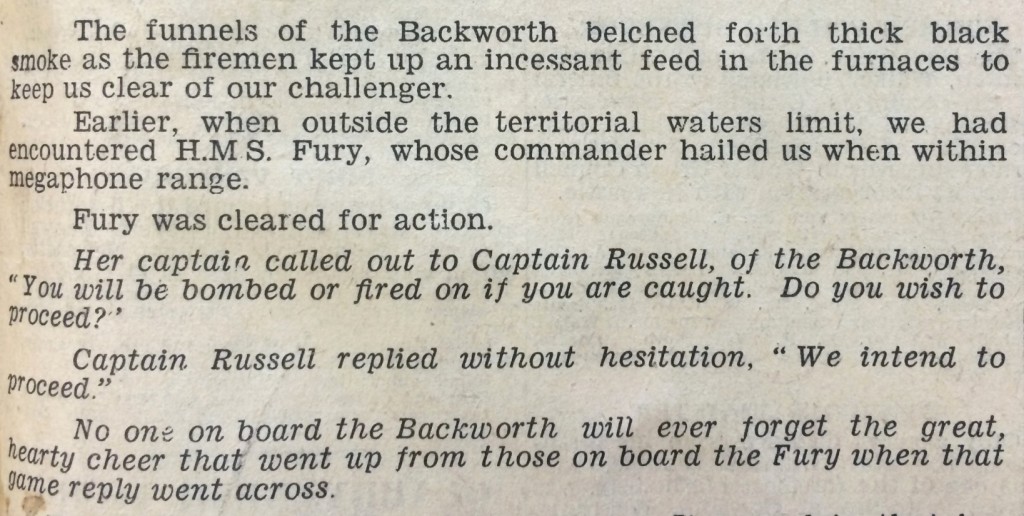 But as the ship reached the 3-mile limit to international waters, the Backworth had to rely on speed and the Basque shore batteries to protect it: 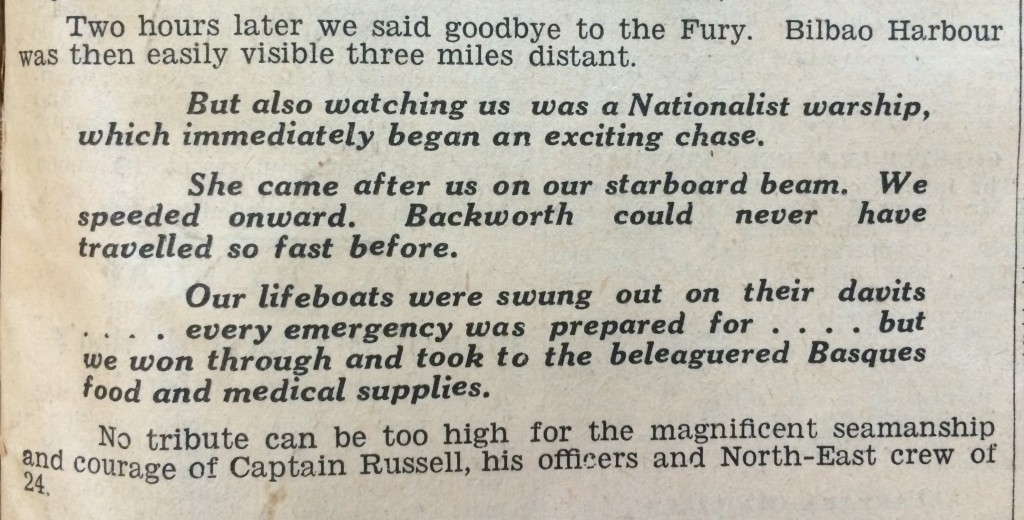 After the ship docked, the danger was not over: 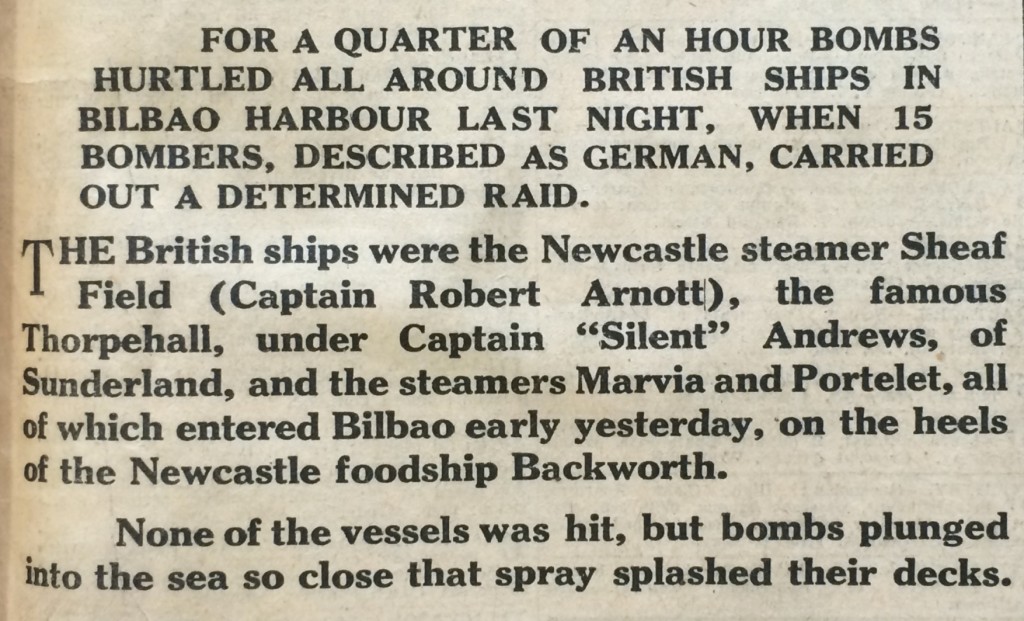 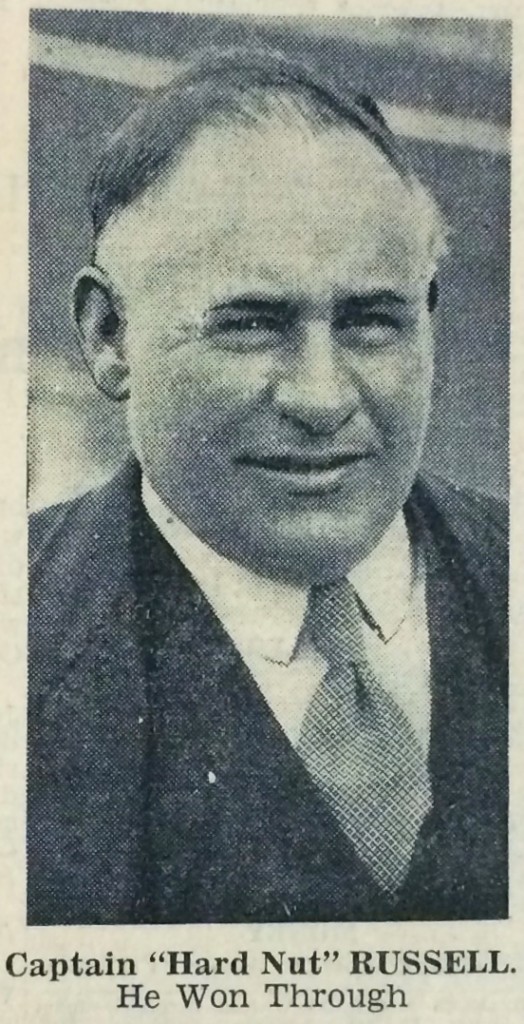 The Backworth was ‘Commanded by Captain “Hard Nut” Russell of South Shields’, said the North Mail, and had a crew of 24 Tynesiders. Captain Russell had a personal commitment to helping the Basques. He told the North Mail, “As a married man myself, I am happy to undertake the trip to help the defenceless women and children in the Basque country.” While the supplies were being loaded on his ship at Immingham (near Hull), he travelled to London to meet Wilfrid Roberts, MP for North Cumberland. Roberts was Treasurer of the Spanish Joint Relief Committee, which raised aid for civilians on both sides of the conflict, though he commented, “We have had little encouragement, however, so far from General Franco”.

Mr Wilfrid Roberts explained last night, “On Tuesday night Captain Russell of the Backworth (2,480 Tons) listened to me in the House of Commons. He afterwards met Mr. Lloyd George and a Basque representative.

His ship is now lying at Immingham Docks already loaded with 200 tons of food contributed by the British trade unions movement. 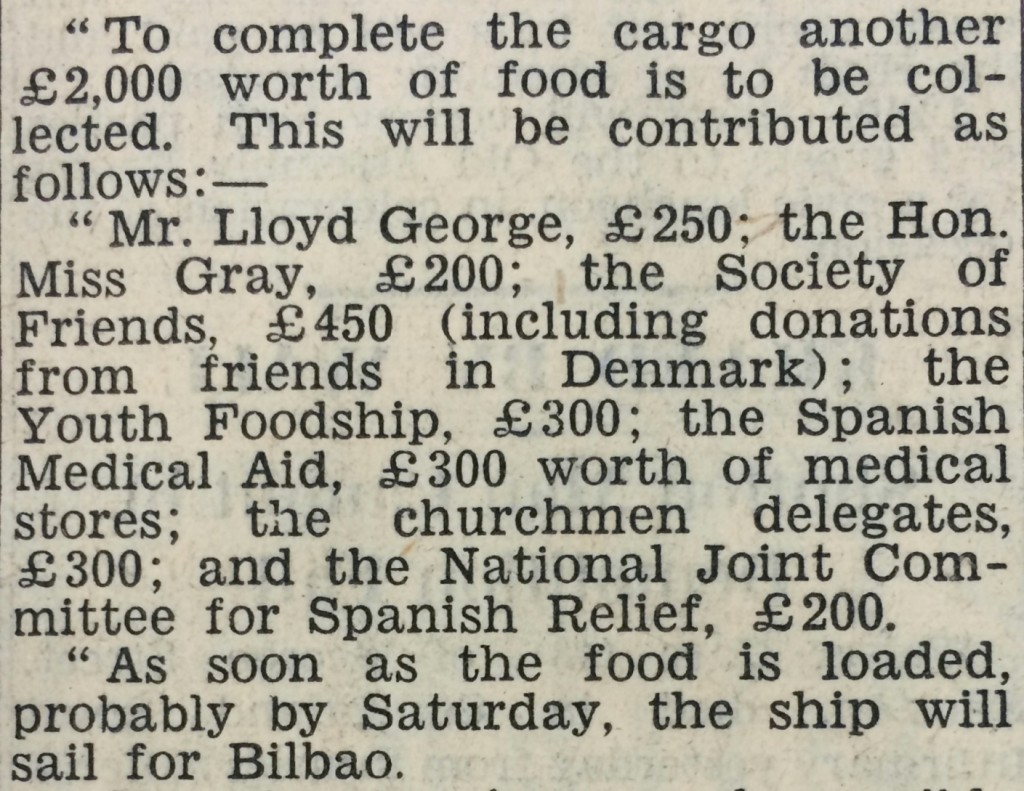 A later story, radioed from the ship by the North Mail’s special correspondent, gave some extra details:

In addition, the Backworth carried 2,000 tons of coal, which will be traded on a barter system for iron ore from the Basque territory.

The crew of the Backworth shared Captain Russell’s commitment to helping the Basque people:

In recognition of the danger, British crews received a 50% bonus on pay rates for a period of 24 hours either side of being in a Spanish port (raised to double pay from May 17th).

The North Mail a few days earlier reported that the National Joint Committee for Spanish Relief was hoping to use the Backworth to transport refugees:

Initially, Franco opposed evacuation of refugees, on the grounds that removing large numbers of vulnerable civilians would strengthen the Republican military position. The North Mail reported: 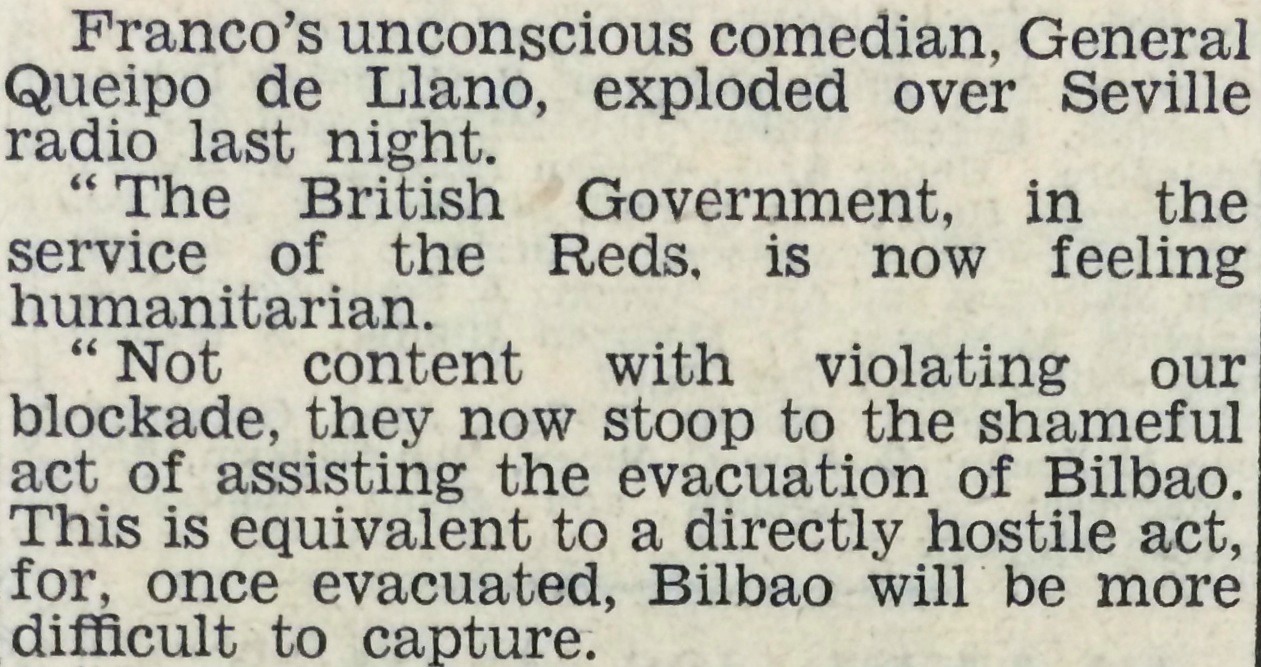 Franco’s change of mind allowed the refugee evacuation from Bilbao to get under way at the beginning of May. This news report in Paris was picked up by the Pittsburgh Post-Gazette:

Evacuation of women, children and invalids from the besieged Basque capital of Bilbao started late today [May 2nd], immediately after General Franciso Franco, Spanish Rebel dictator, relented and agreed not to shell refugee ships in the Bay of Biscay.

The exodus under the guardian guns of French and British warships will be in full swing tomorrow when scores of Basque fishing boats put out from Bilbao with their cargoes of refugees.

The nine freighters will carry 5,000 women and children to France on their first trip.

Another British freighter, the Branhill [Bramhill], arrived in St. Jean de Luz with food bound for Bilbao. It will be pressed into refugee service.

…It was expected that 30,000 Basques, most children, would be removed from Bilbao immediately. Others will be evacuated as quickly as transport becomes available.

Five of the nine ships named for the initial phase were from Newcastle – the Hamsterley, Backworth, Blackhill, Consett, and Sheaf Field. The others were from London and other ports.

The North Mail’s special correspondent on board the Backworth, Edward F Balloch, radioed the refugee rescue plans back to Newcastle on May 2nd: 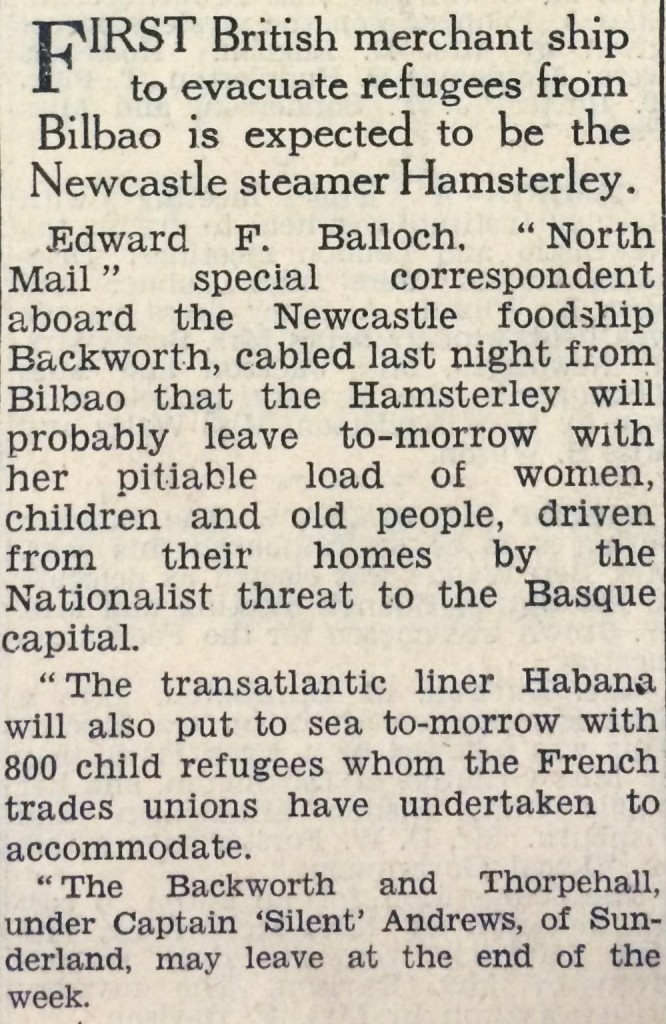 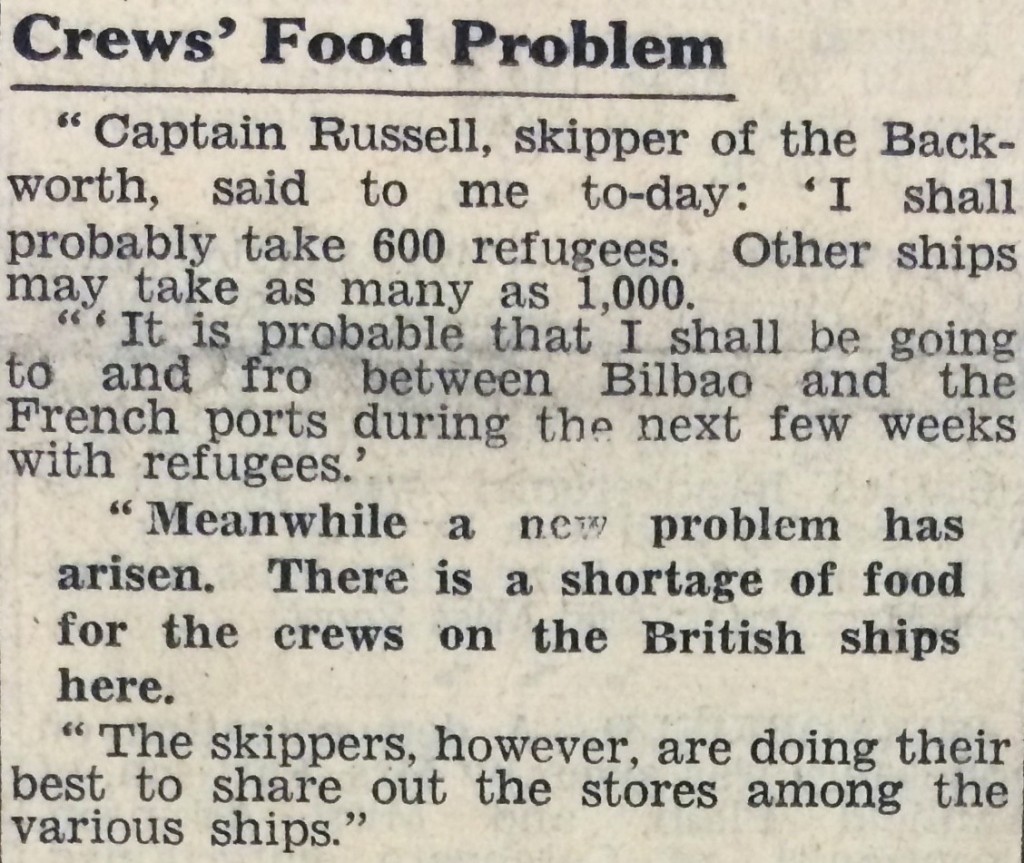 The refugees rescued from Bilbao were taken to the French ports of St. Jean de Luz, about 70 nautical miles along the coast, and Bayonne.

The Backworth left Bilbao on May 7th, a few days after the Hamsterley, in convoy with the Thorpehall of London, and the MacGregor (reported in the North Mail May 8th).  (The Thorpehall had also previously delivered 40 refugees to the French port of La Rochelle.)

It can’t have been a comfortable journey for refugees on these ships. The Hamsterley, Backworth and other vessels were coal and general cargo ships – they weren’t built to carry many passengers.

The Hamsterley steamer, having left Bilbao on May 3rd, arrived back on the Tyne with a cargo of iron ore on May 10th. It would have been difficult to fit in separate refugee and cargo trips in the time (a direct voyage from Bilbao to the Tyne took 2 days), so presumably they were combined.

Strangely, the story published on the ship’s return doesn’t mention refugees. In fact, the North Mail goes oddly quiet on the subject altogether, though rescues by British ships continued from the northern coast of Spain. This may have been because the subject was politically delicate, since both Franco and his ally Germany had charged that protecting food ships in international waters and rescuing refugees were contrary to the Non-Intervention Agreement. The German newspaper Börsen Zeitung criticised the British refugee rescue voyages in October 1937, as Sir George Ogilvie Forbes reported in a telegram to Anthony Eden, Secretary of State for Foreign Affairs:

The “Börsen Zeitung” enquires in a leading article this evening what has happened to the refugees of whom, according to the First Lord of the Admiralty, 89,000 have been evacuated from the north coast of Spain under the protection of His Majesty’s Ships and 10,000 upon His Majesty’s Ships themselves…. We do not know what England is going to do with this mass of Red soldiers, hangers-on, agitators and common criminals. … We have the right to ask England … how this conduct is to be reconciled with the principle of non-intervention …

However, by early June, the Nationalist blockade of Bilbao had lapsed. The Newcastle steamer Sheaf Field had set out from the Tyne on May 31st with a cargo of coal, returning with iron ore to Tyne Dock on June 13th. The North Mail reported:

A thrilling aerial duel above the Newcastle steamer Sheaf Field at Bilbao, culminating in a Nationalist plane being brought down in flames, was described to a “North Mail” representative when the vessel arrived in Tyne Dock, yesterday, after another trip to the Spanish war zone.

One of the crew said that although a Nationalist warship was in the vicinity while the Sheaf Field was heading for Bilbao and also when she put to sea again on her return trip, no attempt was made to interfere with the vessel. The “blockade” had collapsed.

One of the last aid ships into Bilbao before it fell to the Nationalists was the Alice Marie, which set out with medical supplies from Blyth in early June. 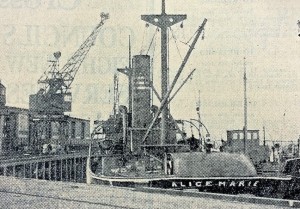 Franco’s Nationalists captured Bilbao on June 19th 1937. Iron ore exports to the Tyne were immediately stopped, but restarted in September 1937. British and French efforts to help refugees at Santander and the surrounding area continued.

The war overall still had nearly two years to run. It eventually ended in April 1939 with Franco’s victory.

The exhibition Conscience and Conflict: British Artists and the Spanish Civil War continues at the Laing Art Gallery until June 7th. There is another blog about the Newcastle steamer Hamsterley and the bombing of Guernica here.