One of the pleasures of working as the Librarian in the Great North Museum:Hancock Library is that you get to look at all of the wonderful new books that are added to stock.

Ann Spencer, one of the new Library Volunteers, took the opportunity to write a review of David Attenborough’s book, First Life; A journey back in time, that was recently added to stock. Here are her thoughts….

This book is based on insights captured during the making of the accompanying TV series, with an introduction by David Attenborough. The book is a chronological account of the story of early life from Pre-Cambrain times to key events during the explosion of life in the Cambrian period. The story of how geologists pieced together the puzzle of how living creatures survived the Ice Age has more in common with a Sherlock Holmes adventure than the work associated with activities in a laboratory.

Although the book deals with potentially difficult subject matter the text is well written and accessible to readers who have little specialist scientific knowledge. There are some magnificent photographs including computer generated images of plants and animals extrapolated from their fossils.

One of the many delights of this book is the insight it provides into the young David Attenborough’s enthusiasm for fossil hunting, a passion which prompted his interest in the natural world which has given pleasure to so many of us.

Listed below is a selection of some of the other new purchases and donations that have been recently added to the Library. To view the full records please go to NewcastleUniversity’s Library Catalogue.

Curcic, Slobadon, Architecture as Icon – Perception and representation of architecture in Byzantine art,PrincetonUniversity, 2010

Hodder, Ian, The present past – An introduction to anthropology for archaeologists, Batsford, 2012

Moyal, Ann,  Platypus – The extraordinary story of how a curious creature baffled the world, Smithsonian Institute, 2001 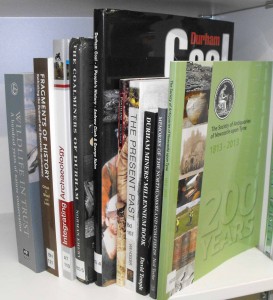