A recent acquisition for the Archives is the visitors book for Swan Hunter’s Neptune Shipyard covering the years 1910-1963 (TWA ref DS.SWH/5/1/6/3). This volume had apparently been put in a rubbish skip on the closure of the yard in 1988 before being rescued.

The book covers the launches of over 170 ships, with the signatures of those who attended. There aren’t many very famous names, unlike the royals who launched Navy ships at the Wallsend yard but there are a few notables. These include the parties of Chinese who attended the launches of for example the SS Hai Yuan in 1934. The ship was launched by Dr Quo Tai Chi, Chinese ambassador to Britain and his wife. Their son Merlin Quo aged 9, also present at the launch, was to become a TV producer and died in New York City in 2008. 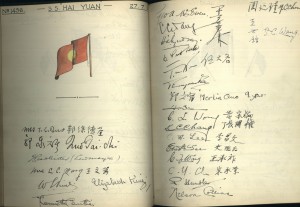 Also present at a number of launches was Susan Auld, nee Denham Christie, the first woman to graduate as a naval architect from Durham University and designer of battleships and of the landing craft used to land Allied troops in France on D-Day. 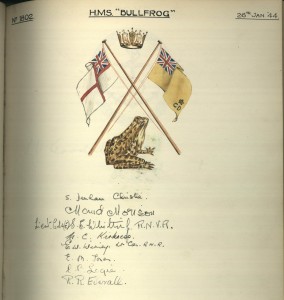 By far the most attractive thing about the book is the individual paintings that illustrate each launch, in some cases just flags, but in others very detailed illustrations such as the one of Bamburgh Castle. 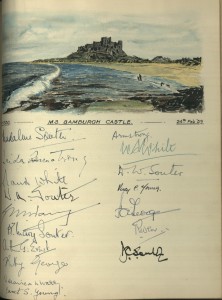