This is a guest post by June Holmes, Archivist of the Natural History Society of  Northumbria.

Friday 8 May 2015 is the anniversary of VE Day (Victory in Europe Day), marking
70 years since the end of the Second World War in Europe.

The WW2 made a huge impacted on the Hancock Museum, resulting in money and staff problems with many of the members lost as casualties of the conflict. 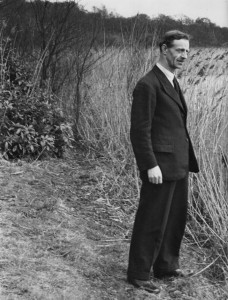 Curator T Russell Goddard (1889-1948) records the welcome news of the end of hostilities in his Curator’s diary and the Museum closed for the day.

“Today & tomorrow, May 9th, were appointed by the Prime Minister (Mr. Winston Churchill) as public holidays in celebration of victory in Europe. The Prime Minister made a public announcement by wireless at 1500 & H.M. The King broadcast a message to all his peoples at 2100.”

The day before he had recorded that “sand bags etc.” had been cleared away from the Museum and added –

“At 0241 today at General Eisenhower’s Headquarters at Rheims [sic City of Reims, France] General Jodl, the representative of the German High Command & of Grand Admiral Doenitz [sic Karl Dönitz], the designated head of the German State signed the act of unconditional surrender of all German land, sea and air forces in Europe.” 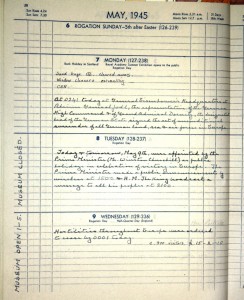 On Wednesday the 9th May the Hancock reopened from 1pm – 5pm and the joyous people of Newcastle celebrated by visiting their favourite museum – over 800 people came through the doors!

See the Curator’s diaries for yourself in the library of the Great North Museum:Hancock. Contact June Holmes Archivist of the Natural History Society of Northumbria to make an appointmen: june.holmes@ncl.ac.uk