Did you know that boxing legend Muhammad Ali (1942-2016) came to South Shields in the summer of 1977? Ali was the World Heavyweight Champion at the time so, as you can imagine, his Tyneside visit drew huge crowds. 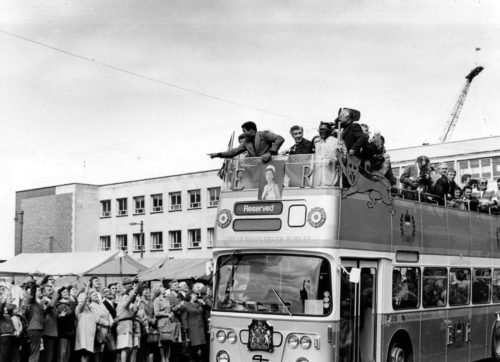 Many came hoping to catch a glimpse of their boxing hero, but Ali’s appeal extended beyond the world of boxing. For many, Muhammad Ali’s political convictions and campaigning helped to make him a standout figure, someone who sought to use his fame to champion the human rights of the oppressed and the friendless. Ali was a truly inspirational individual on many different levels, and his visit to our region 43 years ago is still fresh in the memory of those who were lucky enough to be there. We recall his special visit in this blog for Black History Month. 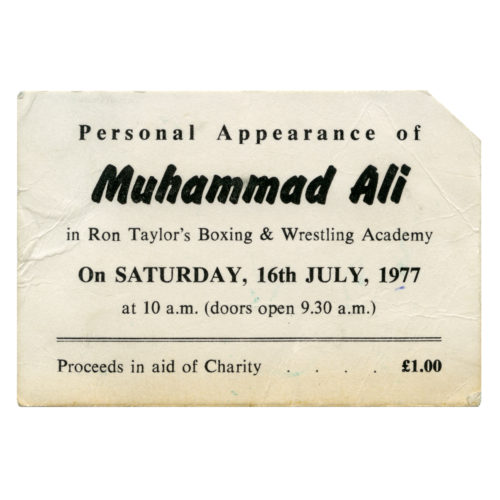 Ali and the North East

Muhammad Ali’s visit to the North East in 1977 was one he thoroughly enjoyed, and which he said he’d remember for the rest of his life. At the time he was one of the most famous people on the planet, not just for his boxing, but also for his political ideas and activity.

Ali came to our region to promote boys’ boxing clubs. He came at the invitation of Johnny Walker, a painter and decorator from South Tyneside who had once boxed himself. Johnny idolised Ali and had travelled to America in search of his hero, persuading him to come to an area of the world that the boxing champ had never even heard of. 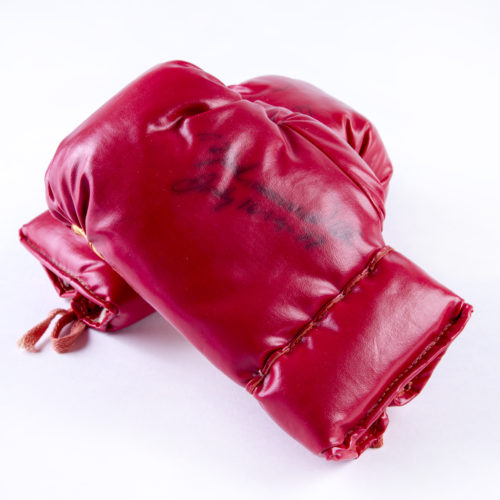 Ali visited South Shields twice while he was on Tyneside, on Saturday 16 July 1977 and again the following day, creating fantastic memories that the locals and Ali himself would never forget.

Highlights of his visit to South Shields included: 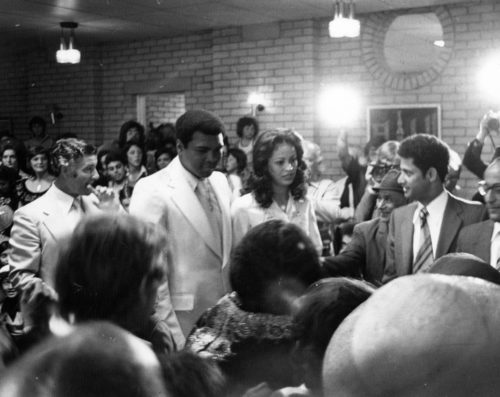 Ali stated that he would remember his visit to South Shields for the rest of his life.  He was struck by the immense reception and support he received while visiting. He was quoted as saying “To think I have so many friends in South Shields. I am going to tell them in America!”

Ali and Civil Rights in America

Ali was a fantastic boxer, one of the greatest of all time, but his work fighting against the oppression and discrimination then endured by many African Americans was just as important in his life. Born as Cassius Clay in 1942 in Louisville, Kentucky, Ali was present to see major events for the advancement of African Americans’ civil rights in the 1950s, which helped shape his beliefs before he rose to fame.

His role as an important civil rights activist took flight in 1964. Just days after becoming the heavyweight champion of the world, he legally changed his name from Cassius Clay to Muhammad Ali and declared his membership of the civil rights activist group the Nation of Islam. This group was well known for being led by Malcolm X, whom Ali was close friends with until Malcolm’s death in 1965.

Ali even had some influence on the views of perhaps the most significant civil rights leader in history, Dr Martin Luther King Jr, who drew upon Ali’s ideas and beliefs when asked why he was focusing on campaigning against the Vietnam War rather than solely on the advancement of civil rights.

Ali and the Vietnam War

In 1966 during the height of the Vietnam War, Ali refused to be drafted into the armed forces on grounds of religious beliefs. The penalty for his refusal was the stripping of all boxing titles and a ban from the sport, starting in 1967. He was also sentenced to five years in prison, which upon several appeals, was overturned and Ali was freed on bail. Whilst he was banned from the sport Ali visited many institutions such as universities to talk about his beliefs.

Ali eventually found justice, with his punishment for refusing the draft being overturned by the Supreme Court, and he was allowed to return to boxing in 1971, despite the ongoing war in Vietnam. This was seen as a massive decision by the court. By refusing the draft, standing by his beliefs and his subsequent victory in the face of the consequences of his actions, Ali became a key figure of the anti-establishment culture and a symbol against the oppression and racism African Americans were victims of.

As an important member of the Nation of Islam in the 1960s, Ali should have been quite opposed to the peaceful campaigning of Martin Luther King. Their views differed hugely.

Yet this was not actually the case, as the two shared a secret friendship with each other, mainly through the fact that both had a common enemy; hatred and racism from certain parts of the United States. The FBI managed to wiretap a conversation between them, one that seemed friendly, with Ali proclaiming his support for King and saying that King was his ‘brother’. King drew upon Ali’s resistance to the draft when he himself was asked why he was so opposed to the war in Vietnam.

“Cassius Clay is a slave name. I didn’t choose it, and I didn’t want it… I am Muhammad Ali, a free name – it means beloved of God – and I insist people use it when speaking to me and of me.”

“My conscience won’t let me go shoot my brother, or some darker people – some poor hungry people in the mud – for big powerful America… I’m not going 10,000 miles from home… to continue the domination of white slave masters of the darker people of the world over.”

-Muhammad Ali talking about his refusal to fight in the Vietnam War, 1966

“Like Muhammad Ali puts it, we are all – black and brown and poor – victims of the same system of oppression.”

-Martin Luther King Jr. talking about his campaigning against the war in Vietnam, 1967

-Muhammad Ali when challenged about his objection to fighting in Vietnam by a student, 1967 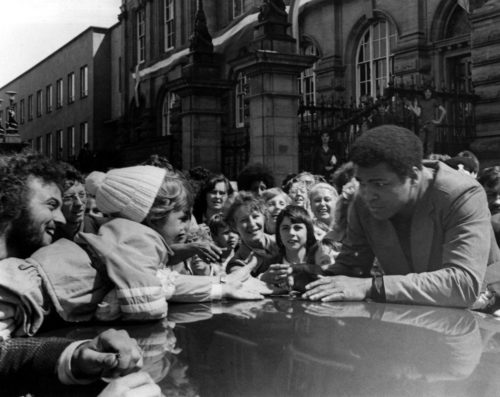 Do you remember Ali’s Tyneside visit in the summer of 1977? Was Ali one of your heroes? What did he mean to you? Please share your memories and reflections by commenting below 😀