Volunteering
Posted by administrator on December 21, 2010     Permalink     Leave a comment

Both of the Monkwearmouth’s wagons are important to the railway heritage of the United Kingdom. They were acquired for the Museum in 1976 and restored to good condition to go on display in 1977. Sadly, with them standing out in the open for so many years since, they have deteriorated but now they have a good home to reside in this is a great opportunity to have them restored and for them to be able to tell their important stories for many many years to come.

I asked John Clayson, Keeper of Science and Industry for Tyne and Wear Museum’s who has curatorial responsibility for the wagons, for the story behind the wagons and this is what he told me. 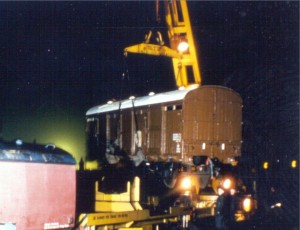 From the earliest days of the main line steam passenger railway in the 1830s there was a demand for people’s personal road transport to accompany them on the train.  At first, horse-drawn carriages were loaded onto open wagons – Open Carriage Trucks

To protect passengers’ vehicles from smuts from steam locomotives and, as train speeds increased, from damage caused by air turbulence, the Covered Carriage Truck was developed.  Capable of travelling at express passenger speeds, CCTs continued in use during the motor car age until the 1980s and were also useful for general freight traffic, becoming a very common type of vehicle.

Loading points were created at stations with convenient road access where carriages, and later motor cars, could easily be loaded onto trains.  At Monkwearmouth the bay platform adjacent to the passenger station building, in this project referred to as ‘the Sidings Area’, became the loading point for the Sunderland area.

CCTs were still being built in the early 1960s.  However, the construction of motorways and the availability of affordable cars providing fast, comfortable travel on longer journeys by road reduced the demand for this type of vehicle.  Of the many ‘preserved’ examples most were acquired by preservation groups in the 1970s and 80s as inexpensive storage accommodation, rather than for their heritage value.  Some have been restored, but in the main they tend to be regarded as expendable, or as a potential donor of a chassis for a carriage body preservation project. Nearly all are kept outside.

The Monkwearmouth Covered Carriage Truck (CCT) is thought to have been built at York Carriage Works in 1939 as one of 117 similar vehicles built to a design known as ‘Common User Coaching Stock Diagram No. 6’. It was allocated the vehicle number 1298.

It would have operated throughout the rail network in Great Britain.  With a spacious interior and wide loading doors, the CCT was a versatile vehicle suitable not only for carrying road vehicles, its primary purpose, but also consignments such as theatrical scenery, parcels, fruit, small livestock and other urgent, high value traffic.  By the 1970s many of these vehicles had become redundant, both through age and because most general goods traffic had been lost to road transport.  The Monkwearmouth CCT came into the TWAM collection in 1976, when it was repainted to its 1939 condition and displayed in the Sidings Area at Monkwearmouth Station Museum.

There is no example of a CCT in the NRM collection. This is said to be because, at the time of its preservation in 1976, the Monkwearmouth CCT was recognised as being a good, original example entering a public collection.  It could be considered as the national ‘type specimen’ of this vehicle.

With reference to the Railway Heritage Register survey’s national database of preserved wagons, the Monkwearmouth CCT:

So far as can be ascertained, the Monkwearmouth CCT is unique among its peers in potentially, through this project, becoming a fully restored vehicle housed sustainably indoors and in a secure environment. 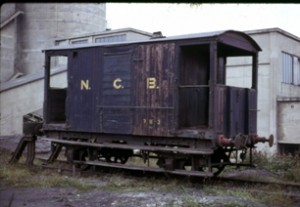 The Goods Brake Van before restoration at Wearmouth Colliery in 1976.

A goods brake van (or guard’s van) is a railway vehicle equipped with a hand brake which can be applied by the guard.  The brake van provided accommodation for the train crew at the rear of a train, specifically the train guard, hence its alternative name.

From the beginning of the main line steam railway until well into the 20th century freight trains had no continuous brake (i.e. a braking system that can be applied by the driver or the guard on all vehicles throughout a moving train).  The only brakes available when on the move were those on the locomotive and its tender and on the brake van.  Because of this shortage of brake power speed was restricted to 25 mph.

If a train became divided accidentally through breakage of a coupling the guard could bring the rear portion safely to a stand, although the time and distance taken to achieve this depended on the weight of the wagons attached to the brake van and the gradient of the line.

To perform these roles effectively, brake vans had a significant amount of ballast weight built into their structure to increase the braking effort, and they were designated by their weight – e.g. 10-ton, 20-ton.

In Great Britain, freight trains without a continuous braking system were still common in the 1970s, but they were mostly eliminated during the 1980s.  Today goods brake vans are seldom required except on trains with unusual cargoes or on track maintenance trains (for example).  Very few remain on the main line railway system.

The Monkwearmouth 10-ton Goods Brake Van was built at Shildon Wagon Works, Co. Durham, by the North Eastern Railway (NER) and was completed in March 1916 as wagon number 20800.  It was built to a design known as ‘Diagram V4’, the ultimate development of the goods brake van by the NER, which was used for brake van construction from 1908 until 1923.  The V4 design was the first NER type of goods brake van to use a steel underframe, which set the pattern for future development.

The V4 design of 1908 brought together certain key characteristics of the goods brake van that were adopted as standard practice right through to the construction of the last of these vehicles in Britain more than 50 years later.  These are:

Other than increasing the weight of ballast carried to enhance braking capability, the only significant later developments were (i) a longer wheelbase, which gave a better ride as speeds increased and resulted in the appearance of a short open platform beyond the veranda at each end, and (ii) the addition of continuous brake equipment.

The North Eastern Railway V4 design was thus the precursor of the British Railways standard 20-ton goods brake van of which nearly 5,000 were built between 1949 and 1962, many at the Faverdale Wagon Works in Darlington, Co. Durham.

The Monkwearmouth brake van began its working life based at West Hartlepool, and it would have worked regularly throughout the NER system, from Yorkshire to Northumberland, and occasionally beyond.  Superseded for main line traffic by more modern vehicles, it was sold to the Wearmouth Coal Company.  It was used on trains between Hylton and Wearmouth Collieries until 1971, when internal traffic between these collieries ceased.  It came into the TWAM collection in 1976 especially for display in the Sidings Area at Monkwearmouth Station Museum.  It was painted to represent examples of its type that were based at South Dock, Sunderland.

The Railway Heritage Register survey’s national database of preserved wagons lists 185 goods brake vans.  This is a large number of vehicles, but it should be borne in mind that (a) the majority of these were built after World War 2, and (b) few are kept, or have the prospect of being kept, under cover to ensure their sustainable survival in the long term.

Of the 185 goods brake vans ‘preserved’ according to the Railway Heritage Register survey:

One of these 16 historic vehicles is known to have been scrapped, leaving a maximum of 15.

Of the 15 surviving vehicles listed as being built in or before 1916:

With reference to the Railway Heritage Register survey’s national database of preserved wagons the Monkwearmouth van:

In my next entry I will look at the history of the Sidings Area and how it has been developed since the closure of the railway station in 1967.