I am pleased to report that the conservation and refurbishment work on the wagons is now complete. The final job that had to be done, after the completion of the painting of the wagons in their LNER and NER colours, was the sign-writing. This done the wagons look ready to go back put onto the railway to do an honest days work. But of course that is not to be their future and we are now entering the third stage of the project: designing and producing the displays, interactives and audio-visuals that are going to bring the story of the wagons to life in a way that people can enjoy learning about them and the role the railways have and must continue to play in the transport of goods.

After a tough competitive tendering process the contract has been awarded to Haley Sharpe Design, a company with a long history of designing museum galleries within the UK such as Experiencing Northumberland at Woodhorn, Kennilworth Castle, Northern Spirit at the Laing Art Gallery, Designs for Life at the Shipley Art Gallery and internationally such as Renaissance ROM at The Royal Ontario Museum in Canada and Dubai Maritime Museum in the United Arab Emirates (http://www.haleysharpe.com/projects).

Before any design company can be approached a detailed brief has to be developed by the museum team that includes the curators, the learning officers, conservation officers and managers who take on board any discussions that they have had with the users of the museum as to what they would like to see there. For example, a working model railway has been asked for at the museum since the completion of the refurbishment of the main site in 2007. The model railway that had been in the Children’s Gallery could not be used again because it had just worn itself out and the funds to make a new one were not available. The new display in the Wagon Shed includes a high level ‘0’ gauge model train consisting of a steam locomotive and two covered carriage trucks similar to our real one.

From this the story that needs to be told and how it will be told has to be expressed in a way that the contractors that who come along will be able to turn the ideas into plans and then physical reality. This is called the brief. The brief is developed with the contractors and they go away produce the displays and install them. The discussions have taken place and the work to produce the graphics, films and interactives has started. 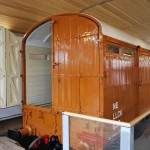 The covered carriage truck at the docking bay end. This will be the entrance to the displays insiide the wagon. 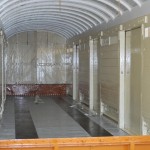 A display about the transport of goods on the railway will be situated inside the wagon. The star feature will be a 1963 Rover P4. 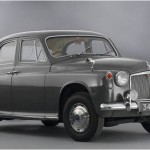 This is the Rover P4 that will be on display inside the Covered Carriage Truck. It is coming to us on longterm loan from the National Motor Museum in Hampshire. 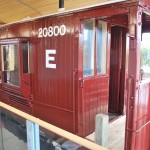 The completed Goods Brake Van. A viewing window has been installed in the look out side so that everyone can see inside the wagon as allowing people into the Goods Brake Van is not possible because of the way in that has to be taken. This can be removed and boarded up to return it to its usual configuration should the need arise. 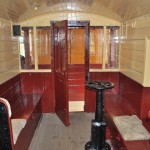 The interior of the brake van showing the all important brake handle centre right. 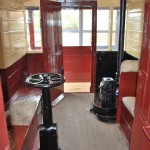 Another internal view of the brake van from the other end showing not only the brake handle left but also the guard’s stove.

One Response to Monkwearmouth Station Museum Railway Wagon Restoration Project – The Beginning of the End!