When first built there was a roof over the lines between the main building at Monkwearmouth Station and the Goods Yard on the west side. This roof provided shelter for the passengers waiting for their trains. On the night of Saturday 1 April 1916 the First World War came to Sunderland in no uncertain terms when German Imperial Navy Zeppelin L11 rained down high explosive and incendiary bombs on both sides of the River Wear. A casualty of the raid was the roof over the railway lines and was never repaired, being removed completely 12 years later in 1928 when the still to be seen platform shelters for the passengers were built.

At about 10pm on the evening of 1 April 1916 German Imperial Navy Zeppelin L11 under the command of Korvettenkapitan Viktor Schutze, who joined the Zeppelin only as recently as 5 March 1916, flying at a height of about 2,200 metres, crossed the coast to attack Tyneside. It had left its base at Nordholz, along with L14, at mid-day with orders to attack southern or central England but the wind was such that L11 found itself approaching the River Tyne in the dark. Following a Zeppelin raid on Tyneside by L10 on 16 June 1915 the defences around the River Tyne had been strengthened and at its relatively low height and experiencing difficulties gaining height in the weather conditions, Schutze decided to manoeuvre round and attack the less well protected port of Sunderland.

At about 11pm Millfield and Deptford were first to be on the receiving end of L11’s deadly payload before it crossed the River Wear and turned its attentions on Monkwearmouth. This is when the Goods Yard was hit and the roof over the railway lines at the Station damaged. Bombs also damaged Thomas Street School, Victor Street and Whitburn Street where St Benet’s Church was damaged. There had been warning of the impending attack and the trams had been evacuated as was the practice. In North Bridge Street Tram No. 10 had been pulled up and was hit along with a house. The conductress, Sally Ann Holmes, was injured and an Inspector was killed. In all 22 people were killed that night with others amongst the 25 seriously injured dying over the following days. Over 100 people received less serious injuries. The local newspaper, the Sunderland Echo, in its report on an air raid on a ‘north east town’ played down the damage and affect on the people saying three small fires were started and quickly dealt with and the people remained calm. Other reports would suggest this was not the case. Shutze himself reported:

‘I decided not to cross the batteries on account of not being very high in relation to the firing, and also because of slow progress against the wind and the absolutely clear atmosphere up above. I fixed, therefore, on the town of Sunderland, with its extensive docks and the blast furnaces north-west of the town. Keeping on the weather side, the airships dropped explosive bombs on some works where one blast-furnace was blown up with a terrible detonation, sending out flames and smoke. The factories and dock buildings of Sunderland, now brightly illuminated, were then bombed with good results. The effect was grand; blocks of houses and rows of streets collapsed entirely; large fires broke out in places and a dense black cloud, from which bright sparks flew high, was caused by one bomb. A second explosive bomb was at once dropped at the same spot; judging from the situation, it may have been a railway station.’
(http://www.richthofen.com/scheer/scheer09a.htm)

Coming under fire from a gun at Fulwell the Zeppelin turned to the south east and after dropping bombs on the docks flew down to Middlesbrough where it caused more destruction before returning to base at Nordholz at 10am on 2nd April. 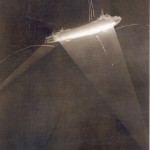 Although large and relatively slow targets Zeppelins were difficult to shoot down as they could fly higher than a lot of the early aircraft, had a higher rate of climb and could be holed but not set on fire before the advent of incendiary bullets later in the war. Zeppelin L34 was an unlucky one when it was brought down by Second Lieutenant Ian V. Pyott flying a BE2c. All of the crew of the Zeppelin were killed. 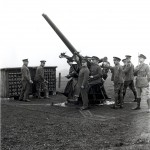 Anti aircraft guns were placed at strategic points around the Durham ports along with batteries of search lights. Here an anti aircraft gun on Tunstall Hill is crewed by men of 20th Anti Aircraft Battery, Durham Royal Garrison Artillery at an unknown date during World War One. 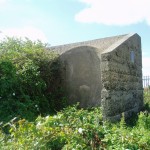 In order to give early warning of approaching Zeppelins sound mirrors were erected along the east coast of England including this one at Fulwell. Sound was reflected of the concrete mirror and focussed onto a trumpet shaped sound collector and the listener was able to plot the approach of the aircraft. This way 15 minutes warning could be given to the defences to get ready to repel the aggressor. 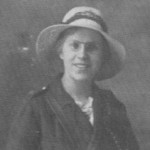 Sally Holmes was injured during the raid having stayed in the proximity of her tram which was badly damaged when one of the bombs fell in North Bridge Street.


As the centenary of the First World War approaches, and we remember the dedication and sacrifices of the people, families and communities of the people who went through it, this is a story that I will be researching in greater depth as at the moment there are some conflicting accounts around. Defences were strengthened around the area afterwards and the establishment of a home defence air squadron, 36 Squadron, based at Ashington, Seaton Carew and Usworth is well recorded but a listening post was built at Fulwell and this is less well documented. I would be delighted to hear from anyone who believes that they can help with information.