Discovery Museum
Posted by administrator on July 11, 2013     Permalink     Comments (1)
After the first installment of menswear from 1800-1900, this blog will continue exploring the styles and shapes that dominated menswear from 1900-1980. Fashion is continually updating and reinventing itself, so read on for some future fashion trends!

The lounge coat continued to replace the frock coat for most informal and semi-formal occasions in the early 1900s.Three-piece suits consisting of a lounge coat with matching waistcoat and trousers were worn, as were matching coat and waistcoat with contrasting trousers or vice versa.  Trousers were shorter than in previous years and often had turn-ups or cuffs. They were creased front and back following the introduction of the new trouser press. The blazer was a navy blue, brightly colored or striped flannel coat cut like a lounge coat with patch pockets and brass buttons, which was often worn for sports, sailing, and other casual activities.

In the 1920s men wore short suit jackets, while the old long jackets were used mainly for formal occasions. In the early 1920s, men’s fashion was characterized by extremely high-waisted jackets, often worn with belts. This style of jacket seems to have been greatly influenced by the uniforms worn by the military during the First World War. Trousers were relatively narrow and straight and they were worn rather short so that the socks often showed. By 1925, wider trousers commonly known as Oxford bags came into fashion, while suit jackets returned to a normal waist length and lapels became wider and were often worn peaked. Loose-fitting sleeves without a taper also appeared during this period. In the late 1920s, double-breasted vests, often worn with a single-breasted jacket became quite fashionable, similar to contemporary suit design of today. 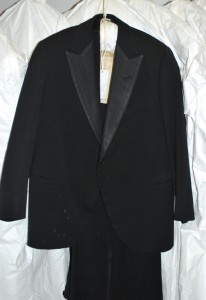 During the 1920s, men had a variety of sport clothes available to them, including sweaters and short trousers, commonly known as knickers. For formal occasions in the daytime, a morning suit was usually worn. For evening wear men preferred the short tuxedo as opposed to the tail coat, which was now seen as rather old-fashioned and snobby! Men’s fashion also became less regimented and formal with trends favoring short jackets and pinstriped suits rather than jackets with long tailcoats. It wasn’t called the roaring 20s for nothing!

Men’s hats were worn depending on their class, with upper class citizens usually wearing top hats or a homburg hat. Middle class men preferred either a fedora, bowler hat or a trilby. During the summer months a straw boater was popular for upper class and middle class men, however working-class men wore a standard newsboy cap or a flat cap. 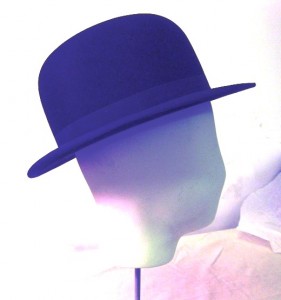 Throughout the 1930s-1950s the most noticeable effect of the general sobering associated with the Great Depression was that the range of colors became more subdued and the bright colors popular in the 1920s fell out of men’s fashion. By the early 1930s, the drape cut or “London Drape” suit championed by Frederick Scholte, tailor to the Prince of Wales, was taking the world of men’s fashion by storm. The new suit was softer and more flexible in construction than the suits of the previous generation; extra fabric in the shoulder and arms, a slightly nipped waist, and fuller sleeves tapered at the wrist, resulted in a cut with flattering folds or drapes front and back that enhanced a man’s figure. The straight wide-leg trousers that men had worn in the 1920s also became tapered at the bottom for the first time around 1935.

By the early 1940s, Hollywood tailors had exaggerated the drape to the point of caricature, outfitting film noir mobsters and private eyes in suits with heavily padded chests, enormous shoulders, and wide flowing trousers. Musicians and other fashion experimenters adopted the most extreme form of the drape, the zoot suit, with very high waists, pegged trousers, and long coats. 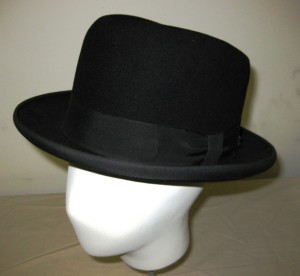 The most common hat of this period was the fedora, often worn tipped down over one eye at a rakish angle, again another trend favored by fashionable men today!

Teddy boy was a British subculture typified by young men wearing clothes that were partly inspired by the styles worn by dandies in the Edwardian period. The clothing included drape jackets reminiscent of 1940s American zoot suits. The subculture started in London in the 1950s, and rapidly spread across the UK, soon becoming strongly associated with American rock and roll. 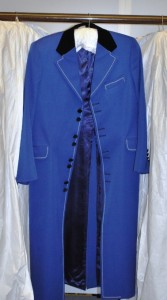 From the late 1960s into the early 1970s clothing was often androgynous and could be worn by both sexes. 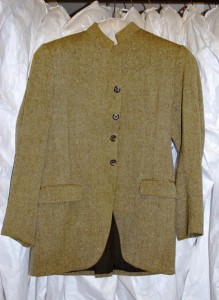 Platform shoes with heels 2-4 inches thick appeared in 1971 and were worn by men and women. These shoes were often paired with wide-leg flared jeans and trousers which were popularized in the 1977 film Saturday Night Fever starring John Travolta. The “disco look”, complete with three-piece suits became very popular! 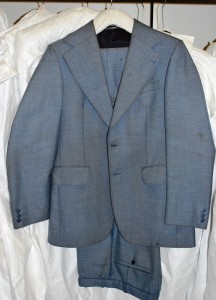 By the 1980s, the 1970s style of looser wide leg trousers and tighter fitting shirts had been completely reversed. The 1980s saw tight or close fitting trousers and large loose t-shirts and tops stealing the show! Fashion trends were becoming heavily influenced by TV series and popular culture. The 1980s brought an explosion of colorful styles in men’s clothing. The look of several popular TV stars helped to set fashion trends among young and middle-aged men. 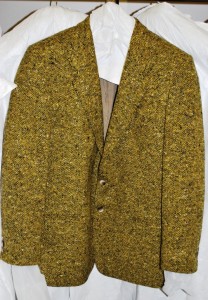 Miami Vice was one such series, whose leading men donned casual t-shirts underneath expensive suit jackets—often in bright or pastel colors. The t-shirt-with-designer-jacket look was often accompanied by jackets with broad, padded shoulders, and a few days growth of facial hair, dubbed “designer stubble”. Similarly, another popular look for men in the early 1980s was the Hawaiian shirt, worn by Tom Selleck, star of television’s enormously popular detective series Magnum, P.I. Thanks to Magnum, P.I., Hawaiian shirts sales soared, as did the number of men sporting mustaches! 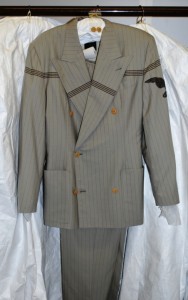 Menswear develops and reinvents itself just as frequently as women’s wear and like all fashion trends, similar shapes and styles can be seen again and again.

So hold on to your best outfits boys!