Memories of the Hancock Museum (part 2)

Read part 1 of Iain’s blog about starting work at the Hancock Museum.

Much loved by generations of local people and highly regarded nationally and internationally for the strength and quality of its collections, with a beautiful building commanding an excellent vista towards Newcastle City Centre, in 2001 the Hancock Museum was however in need of significant investment.

A particular memory from those days is how in snowy weather, the large sheets of ‘Georgian wired glass’ which covered the roof lights would slip allowing snow to pile up into the roof space. Getting these back into place involved the then chief attendant climbing onto the roof and pushing the glass sheets up whilst others myself included used long pieces of wood to encourage the glass into place from beneath. It is perhaps terrifying to think of the health and safety implications.

One of the things I will never forget about the Hancock when I arrived in 2001 was my office.  The office, I think, was actually higher than it was wider or long.  The walls were shelved from floor to ceiling with learned national science periodicals, and on a dark winter’s evening, the walls seemed to cascade in at the top and it would have been easy to imagine the books flying off the shelves in a cartoon maelstrom.

As the office opened directly off stores which had held for nearly 120 years biology collections, the whole area had an overriding smell of mothballs. Anybody could have told which suits I wore for work simply from the smell of mothballs which followed them around like a faithful puppy. 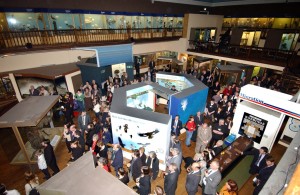 The Bird Gallery at the Hancock Museum

Across my career managing libraries, museums and archives I have worked both in separate office buildings and library and museum buildings. Nothing beats working in one of the museums you are managing.  It really allows you to keep your finger on the ground, to meet people and, in the case of the old Hancock, to live with and smell the collections.

One of the other key memories was snake feeding. Although there had been developments to the Museum since it was built they were few in number. There was no water in any upstairs area of the Museum and a trip to make a cup of tea involved negotiating the famous back corridor which was home to extensive collections, large compressors (used for operating animatronic dinosaurs) and, from time to time, snakes. I didn’t know about the snakes. But one afternoon early in my time there I’d come down from my office in the middle of the afternoon made myself a cup of tea and was walking back along the corridor when I saw a member of staff in front of me who told me to stop where I was.

One of the large snakes was being fed and this was one of the few spaces off the gallery that could actually be used for the purpose of feeding snakes. It was certainly an interesting exercise to negotiate, concentrating on not spilling my tea on a large Royal Python.

Walking along the back corridor also involved passing Eric the taxidermist’s room.  I’m not quite sure whether it should be called an office or a laboratory or an experimental station!  As well as an amazing array of specimens being prepared and repaired the thing that really sticks in my head is Eric’s drawers!  He would open a drawer and inside it would be hundreds, perhaps thousands, of glass eyes, some neatly paired, some individual, different sizes, different styles, different shapes, but all looking back at you. 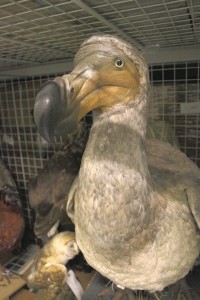 A Dodo in the museum store

A collection as varied and rich as the Hancock’s cannot all be on display.

Much of the material is held because of its high scientific value and is used mainly for academic research purposes. Birds, for example, which are prepared and preserved are not all prepared as taxidermy mounts – the space taken to store these three dimensional items would be far too great for the Museum. They are therefore treated and preserved as study skins – the flattened skins of the birds which, should it be required in the future, could be reanimated to provide a taxidermy mount but provide vital scientific information. 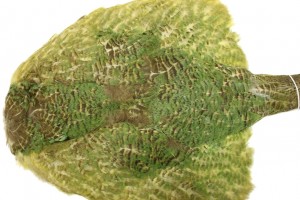 A Kakapo skin in the museum’s store

Look out for part 3 of Iain’s blog, with more of his memories of working at the Hancock Museum in Newcastle.