In the late seventeenth century, Jean Baptiste Tavernier, the French merchant and traveller, acquired a large blue roughly triangular shaped diamond, which originated in the Kollur Mine in Golconda, India.  It was sold to Louis XIV of France, and recut, losing almost half its weight. It became known as the Blue Diamond of the Crown, or the ‘French Blue’. 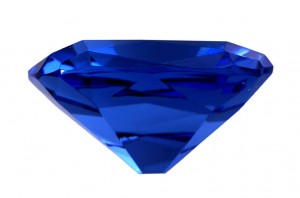 Glass replica of the Hope Diamond (side view)

Marie Antoinette, who was guillotined during the French revolution, is often listed as one of the famous wearers of this diamond.  This seems unlikely, as the diamond was set in a decoration known as the Order of the Golden Fleece, attributed to Louis XV.

In 1792, the diamond was stolen.  Twenty years later, a blue diamond thought to be the recut French Blue, appeared in England, and was purchased by Henry Hope.  Several owners followed, until, in 1911, Evelyn McLean Walsh acquired it.  Following her death in 1947, it was purchased by Harry Winston, the well-known jeweller, who presented it to the Smithsonian Institution in the USA, where it is one of the most popular exhibits. 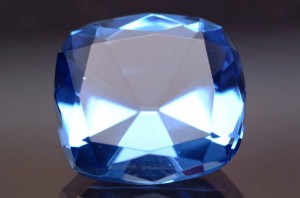 Glass replica of the Hope Diamond

Recent research, based on models of Tavernier’s diamond, the French Blue and the Hope, has demonstrated that the Hope Diamond fits inside the French Blue, which, in turn, fits inside Tavernier’s gem.  This strengthens the theory (given the rarity of dark blue diamonds), that they are one and the same diamond, which has been recut at least twice during its history.

Famous for its intense sapphire-blue colour, the diamond weighs 45.52 carats (1 carat = 0.2gm), and is graded as fancy dark-greyish blue.

A glass replica of the diamond is currently on display at the Great North Museum: Hancock.