Letters from Sir Flinders Petrie in the Hancock Archive

The name ‘Sir Flinders Petrie’ is a powerful one in Egyptology. His work helped turn the field from a profession for wealthy amateurs into a respected discipline and earned him the nickname ‘The Father of Egyptian and Palestinian Archaeology’; As a lowly student he has always seemed to me to be a grand, distant figure to whom my chosen profession owes much but with whom any kind of personal understanding seems impossible. When I first arrived at the Great North Museum: Hancock two weeks ago I did not expect that I would have to revise this opinion. I’m pleased to say that I have been proven wrong.

My name is Doug Henderson. I am currently working at the Great North Museum: Hancock in Newcastle as part of a placement for my MA Museum and Artefact Studies course at Durham University. As a result I have been able to see the workings of the museum and take part in transcribing documents from its library and archives. These archives contain the records of Great North Museum: Hancock and the Natural History Society of Northumbria going back to their foundation in the early 1800’s.

I was naturally pleased enough to be able to work with these materials, but even happier when I found myself working on letters documenting donations the museum had received from the British School of Archaeology in Egypt (BSAE), which Petrie was associated with during the 1920’s and 30’s, including letters from both Sir Flinders and his wife Lady Hilda Petrie. 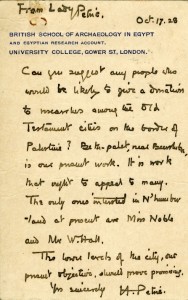 These letters detail the system of subscriptions and donations which provided funds for the work of the British School in Egypt. In exchange, organisations and individuals who subscribed were sent excavated objects. As I read over the letters I realised that a substantial portion of the Museum’s Egyptian and Middle-Eastern material had been received from these subscriptions, and that Petrie himself would often personally decide what each institution received. The objects range from pottery sherds, to grave figurines (known as ‘ushabtis’) to ancient jewellery and make-up.

Nor was this a simple one-way process. The museum curators’ notes at the time record letters sent requesting particular types of artefacts, to best fit in with the Museum’s collections. In one case from 1931 it’s almost possible to feel the excitement in the T. Russell-Goddard’s (the incumbent curator) voice as he recalls ‘This [year’s] collection includes, amongst many other interesting specimens, the only piece of gold-work which Sir Flinders Petrie was allowed to bring away from Palestine this year’.

Digging deeper into these handwritten notes I was able to match up several of the objects described as sent to the museum with their current online archaeological records. What had been mere descriptive text suddenly became clear digital photographs and detailed object notes, bringing the contents of these old letters to life. 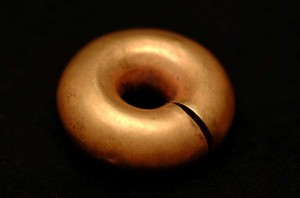 It was thrilling to feel that mainstays of Egyptian collections, in Newcastle and across the U.K., had been pored over and decided on decades before by the famous figure. It was also in a weird way reassuringly personal that he had been willing to provide fine pieces to different museums, rather than keep all the choicest pieces for the BSAE collections in London. 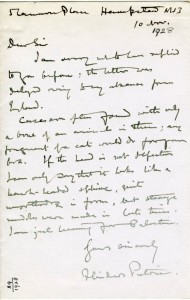 It is discoveries like this that mean I’ve had to revise my opinions on Petrie. They’re also why I love working with archives. Letters and documents can provide a tangible voice which links us to figures and places in the past much more easily than objects alone. Archives are some of the only places we can find these connections, and many of them are more available and accessible now than they have ever been. The voices of the past are at our fingertips, but it’s up to us to grab them.

Exploring the Archives: The archives may be consulted by prior arrangement with the Society’s Archivist June Holmes, in the library of the Great North Museum: Hancock.

The archives are available by appointment on Monday, Tuesday, and Thursday 10am-3.30pm