Lets cross that bridge when we come to it

Our new exhibition opened on Saturday 15 October entitled ‘Crossing the Tyne’. It was all a bit touch-and-go for a while, as at first I thought we didn’t have enough items to exhibit; however, by the end of the week I was fretting that we had too much!

As Exhibitions Officer, the installation of exhibitions usually falls to me to oversee but I must admit that art exhibitions are not my speciality. I trained as an Egyptologist so 3D objects are much easier for me to get my head around when it comes to displays!

Since this year saw the opening of the second vehicular Tyne Tunnel in South Tyneside it made sense for South Shields Museum & Art Gallery to celebrate this feat of engineering in some way. Several years ago there was an exhibition at the Shipley Art Gallery in Gateshead called ‘Building Bridges’, which used many of the beautiful art works that you can see in this new exhibition. However, anyone who visited that exhibition will be pleased to know that we have added plenty of new acquisitions (including objects!) to ‘Crossing the Tyne’.

The premise of the exhibition is that it takes a closer look at the different ways and means of crossing the River Tyne- starting with the ‘Pons Aelius’ (Hadrian’s Bridge) in Newcastle upon Tyne dating to AD 122 through to the Tyne ferries and tunnels.

Last week we beavered away to get everything ready in time for the opening, and as it transpired it was not the artwork that created the biggest stumbling block, but the large, to-scale model of part of the Tyne Bridge that really stumped me (or should I say, nearly killed me). If you do go and see the exhibition, have a look at the size of the plinth that was made and you will see what I mean…

Anyway, the exhibition runs until the 28 January 2012 and we have some great people contributing to the free events programme so I genuinely hope you enjoy it. Personally, I think it looks great… 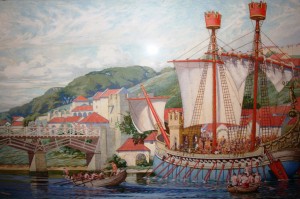