The North East has produced many fine musicians. One of its most celebrated, Sting, has written his first musical The Last Ship, which is due to open on Broadway next year. Songs from the show were recently released in an album of the same name. The Last Ship relates to the dramatic decline of the Swan Hunter shipyard in the 1980s as it prepared for closure. As a young boy, Sting grew up in Wallsend in the shadow of that great shipyard and his childhood experiences clearly left a strong mark on him.

In a recent interview with the journalist Rob Fitzpatrick he mentioned one event in particular, which influenced the rest of his life. Sting remembers seeing The Queen Mother in the early 1960s as she was being driven past to launch a ship on the Tyne. As he recalls in the interview “That was when I got infected. That was when I thought: ‘I don’t want this life: I want that one’. Once I’d found a guitar to play I found a friend to help me get there”.

I thought it would be interesting to explore this a bit. The event which brought The Queen Mother to Tyneside and fired his ambition seems very likely to have been the launch of the ‘Northern Star’. She was a passenger ship built by Vickers Armstrong and launched by The Queen Mother at the firm’s Walker Naval Yard in 1961.

The Archives holds a number of superb images of the vessel and the recent launch of Sting’s album gives me an excellent excuse to share a few of them with you. The images were taken by the Newcastle-based photography firm Turners Ltd. There’s a great colour shot of the vessel being prepared for launch. 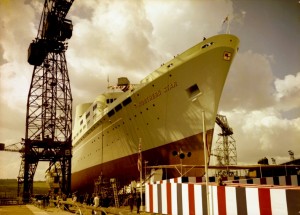 Meanwhile The Queen Mother was arriving by car. 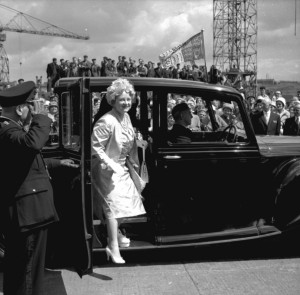 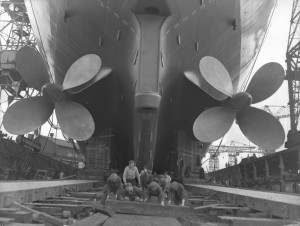 … before the ‘Northern Star’ slides down into the River Tyne. 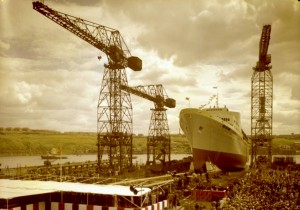 If any readers remember the launch and would like to share their memories of the day then please do leave a comment at the bottom of his page.  The Turners collection includes many more images of the ‘Northern Star’ and the Archives also holds over twenty plans of the ship (TWAM ref. DS.VA/1/175/1-22). If you’d like to visit us to take a look you can find details of our location and opening times on our website.

For those of you who appreciate moving pictures you can also enjoy a film clip of the launch on the British Pathé website http://www.britishpathe.com/video/queen-mother-names-liner.

This blog has been produced to celebrate the Explore Your Archive Campaign.

To find out more about archives, and how you can start your own adventure visit www.exploreyourarchive.org

9 Responses to Launching the careers of two ‘Northern Stars’