Joseph Crawhall II – A Victorian Artist and Man of Many Parts

In my role as the librarian at the Great North Museum: Hancock Library I’m fortunate to regularly come across many beautiful and interesting books.  The authors and illustrators who created these volumes are often just as fascinating as the books themselves, and many have connections with Newcastle upon Tyne. 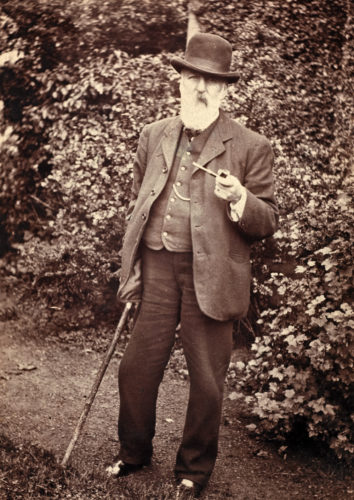 As his title suggests Crawhall was part of an artistic family that spanned the 19th and early 20th centuries. His father was a local politician, businessman and former Mayor of Newcastle as well as an amateur artist. His son, also called Joseph, became a celebrated artist.

Joseph Crawhall II was born at West House, Newcastle. Along with his brother and sister he inherited artistic ability from his father. Joseph developed a passionate fascination with the past which led to a specific interest in reproducing the kind of woodcuts and engravings associated with locally published chapbooks and ballad sheets. Chapbooks were a type of printed street literature which formed a rich publishing tradition in his native Newcastle in the 17th and 18th centuries. They were cheaply produced and contained rudimentary, but evocative woodcut illustrations.  Crawhall also took inspiration from the decorations on medieval glass and manuscripts and the wonderful engravings of the local wood engraver and naturalist, Thomas Bewick. By creatively combining and synthesising these diverse artistic influences Crawhall was able to formulate his unique and individual graphic style which still appears vital and contemporary today. 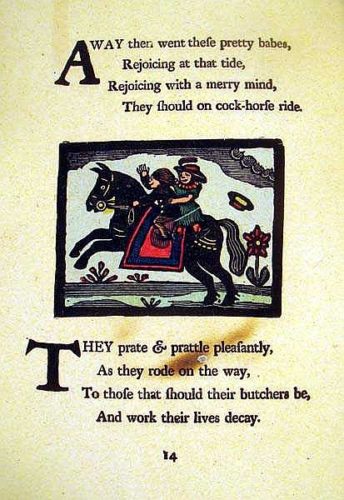 Published in 1883 Crawhall’s book “Chap-Book Chaplets” and its companion volume “Old Ffrendes With Newe Faces” are a testament both to his artistic skill and his love for the folk literature tradition of the northern region. The illustrations in the volumes use the medium of wood-engraving. Crawhall cut the blocks out of less coarse box wood, he then drew his designs onto the polished end-grain blocks using dark ink. Finally, he made incisions in the block using a tool called a “graver”, supporting the block on a sandbag as he worked. Although the printing for these volumes was done in black and white Crawhall added colour by hand to bring the images to life. Crawhall was noted for his sense of humour which permeates and elevates his imagery giving it great vibrancy and appeal. 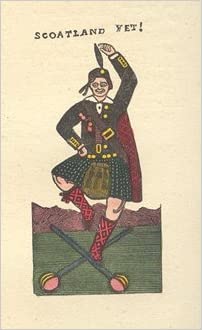 Crawhall was a man of many and diverse interests. He loved the Northumbrian pipes and north eastern songs and published a book titled “Beuk O’ Newcassel Sangs”. As a leading member of Newcastle’s Art Association, he helped to organise exhibitions and he is held responsible for much of the groundwork for establishing the City’s art collections. He was also a keen rower and had an interest in archaeology. Crawhall developed a friendship with Charles Keane, the noted cartoonist, who worked for Punch, the famous humorous periodical of that time. Crawhall provided him with rough drawings and “punch” lines which the cartoonist completed and published.

Another of Crawhall’s pastimes was that of angling of which he was a keen practitioner. Indeed the first book that he produced was the self-printed “Compleatetest Angling Booke That Euer Was Writ”, published in 1859. This established his characteristically quirky and idiosyncratic style. 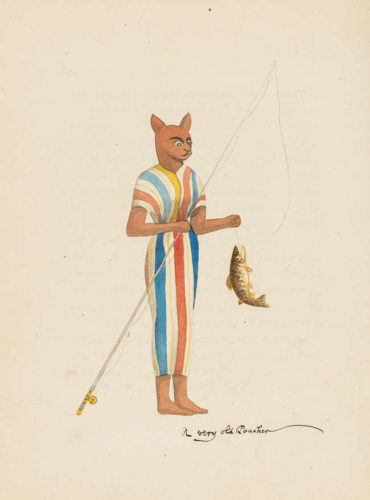 Illustration from Compleatest Angling Beuke That Ever Was Writ

After a long and productive life Joseph Crawhall died in 1896 at the age of 75 and he was buried in Morpeth. He was a much respected and admired figure, both locally and nationally and his passing was marked by the Newcastle Daily Leader who described him in an obituary as “One of the north of England’s most conspicuous and interesting figures.”

His son’s biographer described him as “One of the most fascinating characters of the Victorian era”.

I hope that this blog has sparked an interest in Joseph Crawhall II and his rich and unique body of work. If you would like to view some of his marvellous publications, you are welcome to visit the Great North Museum:  Hancock Library where they are part of the library of the Society of Antiquaries of Newcastle upon Tyne. The library is free to use and is open to everyone. At the moment the library is temporarily closed because of the Covid-19 pandemic.

I would like to thank Newcastle University Special Collections who kindly allowed me to reproduce the photographic portrait of Joseph Crawhall II, which is part of the archive of material that they hold on him. The collection details are as follows: