John G. Watson and many, many coins. A Guest Post by Daniel Wood.

My name is Daniel Wood, I am currently studying an undergraduate History and Archaeology degree at Newcastle University. During the summer holidays I undertook an Archaeology-related fieldwork placement at the Great North Museum: Hancock in partnership with the Natural History Society of Northumbria (NHSN).

John G. Watson, a local numismatist donated a large collection of Chinese, Japanese and Korean coins to the NHSN in 1921. I was originally given the index cards that were associated with the collection to transcribe. Luckily, the actual coin collection was soon found within the Natural History Resource Centre, located in the Discovery Museum. The task of matching up the written and archaeological sources could now begin! The coins encompassed a wide time period of Chinese history, beginning with the Zhou Dynasty in 1046 BC and ending in the Qing Dynasty in AD 1911. You can see below just one of the many types of coinage from the collection that Watson donated and beneath, the written record associated with it. 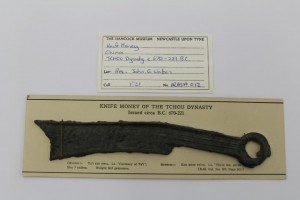 One of the earliest examples of Chinese coinage from 670-221 BC. 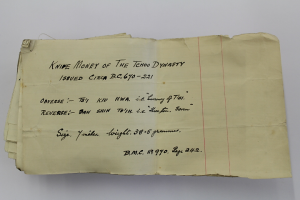 The written record associated with the above artefact.

The most difficult task was not the matching of records, or the translation of symbols on the coins however; it was finding information about the donor, John G. Watson that could be added to the archival record. From what little information we could garner, it is clear that Watson lived in Benwell, Newcastle upon Tyne during the 1920s, and had a keen interest in Chinese numismatics as he wrote a variety of books on the subject during the decade, the most prevalent book being Common Chinese Coins, published in 1924. The cover can be seen below. 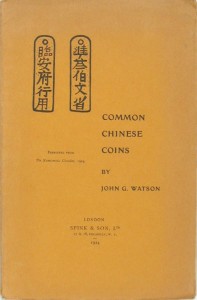 Despite this, the information can be added to the Society’s archives for future reference. Beyond this I was also given the task of photographing, translating and recording another collection of Chinese coins and a Chinese coin sword, an artefact used to ensure a happy marriage or ward away evil spirits. Though having no knowledge of the Chinese language at the beginning of this project, it was not as difficult as you might imagine! Luckily, the coins were from a much narrower period of time – dating from the Qing dynasty which ruled from 1644 to 1911. Below you can see the coin collection and sword. 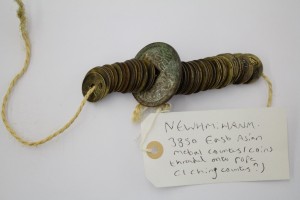 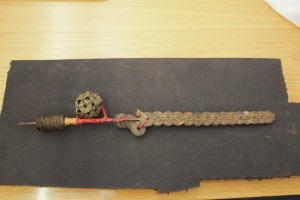 The final task was to record late twentieth-century and early twenty first-century coinage from around the world, including former East and West Germany, Greece, Israel, the US and Singapore just to name a few. It was very interesting to see how currency has evolved from the ‘knife money’ shown above, to modern day dollars and euros. All these artefacts have now been added to the Museum’s database and archival store.

Despite having no knowledge of the subject area at the beginning of this placement, I have not only thoroughly enjoyed my time working at the Museum but have also learnt a great deal about this period of Chinese history and currency through the ages.

With many thanks to June Holmes of the Natural History Society of Northumbria, and Andrew Parkin and Ian Bower at the Great North Museum: Hancock.