In my role as Librarian at the Great North Museum: Hancock Library I regularly come across the name of John Collingwood Bruce (1805 – 1892). I decided to investigate his story, which provides a fascinating tale of a Newcastle man whose life spanned the majority of the 19th century. This is what I found.

Bruce played a pivotal role in popularising the study and appreciation of Hadrian’s Wall. He did this by producing a series of books on the subject that are still in print and establishing a series of Pilgrimages to the Wall that continue to take place every ten years, the most recent occurring in 2019. 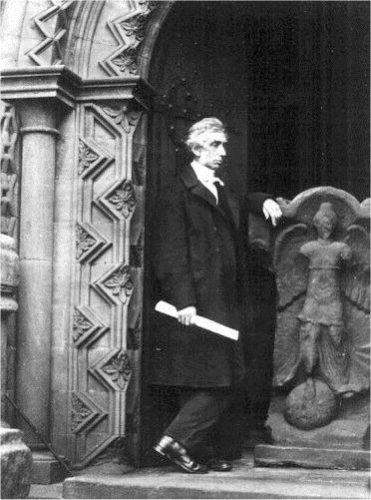 He was the eldest son of John Bruce of Newcastle and was educated at St. Percy Street Academy, a school in Newcastle kept by his father. He graduated as an M.A. from Glasgow University in 1826. In early life he studied to be a Presbyterian minister, but instead decided to assist in the management of his father’s school of which he became sole proprietor in 1834. He developed a lifelong, passionate interest in history which dated from his childhood and he joined the Society of Antiquaries of Newcastle Upon Tyne in 1846 when he was 39.  He published a “Guide to the Castle of Newcastle Upon Tyne” in 1847.

In 1848 Bruce had planned to visit Rome, but because of the political situation in that area he was unable to do this. Instead he decided to visit the more local Roman Wall. He was accompanied by his son Gainford, who was 14, and Charles and Henry Burdon Richardson, the latter the drawing master at his school. Henry was allocated the task of recording images of the Wall and he produced almost fifty sketches that were subsequently worked up into paintings. 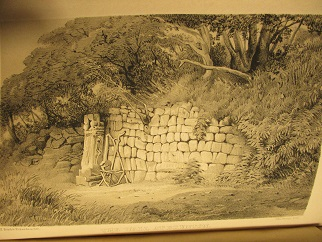 Drawing of the Roman Wall at Brunton

During November and December of 1848 Bruce volunteered to deliver a series of lectures based on his experiences of the journey along the Wall. These took place at the Newcastle Literary and Philosophical Society. Using the skills that he had developed as a teacher he included examples of actual stones from the Wall to provide evidence for his arguments. He also made available some of Richardson’s paintings to illustrate the lectures. The series proved to be a great success and galvanized local interest in the study of the Wall. In order to harness this enthusiasm Bruce invited participants to take part in the first Pilgrimage to the Wall to experience first-hand this remarkable historic monument. This event took place between 25 June – 3 July 1849, with a core of 24 participants that included just three women. The second Pilgrimage did not take place until 1886, but in total this event has now been organised thirteen times, latterly every ten years.  The most recent Pilgrimage took place in 2019 and was attended by more than 200 “pilgrims.” 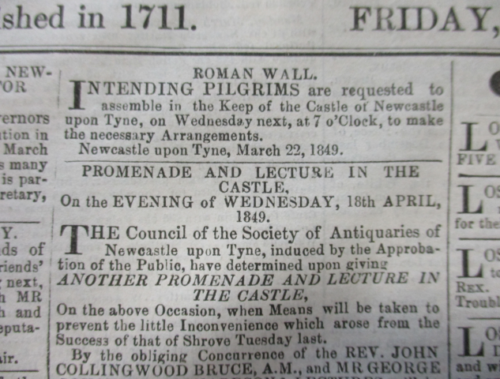 Invitation to the First Pilgrimage

Bruce’s lectures formed the basis for his major work “The Roman Wall” which was published in 1851 and covered all aspects of the Wall in great detail.  Bruce was not a trained archaeologist, but rather an interpreter of other people’s work, for example the local historians John Horsley and John Hodgson. He also incorporated the results of recent survey work at the Wall by Henry MacLaughlan, who was funded by the Duke of Northumberland.

As an interpreter Bruce had the advantage of being both a schoolteacher and a minister of religion. This enabled him to organise and present facts effectively and convince his readers of his point of view. The book was 472 pages long with numerous plates and illustrations taken from original Roman artefacts. It also included many lithographs of the contemporary state of specific locations which were the work of the previously mentioned Henry Burdon Richardson. The work was published on a subscription basis with many noted individuals providing their support, including the Duke of Northumberland.  The “Roman Wall” was well received both locally and nationally and served a key role in filling a gap in providing a comprehensive account of the Wall and simultaneously raising awareness of this historical landmark. 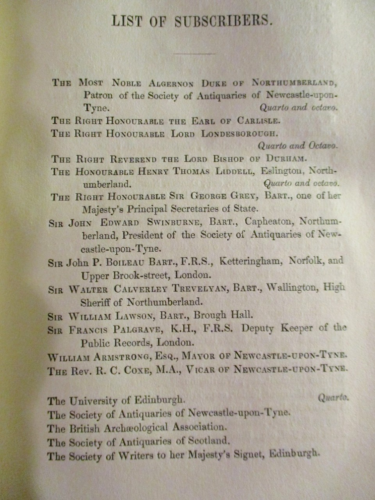 The requirement for a publication about the Wall that was more portable and compact than the large and weighty 1851 publication was another challenge that was addressed by Bruce in his “Wallet Book of the Roman Wall” which was published in 1863. This provided a pocket-sized volume that a visitor could carry along the Wall to enhance and enrich their experience. Subsequent updates to this work were titled “Handbook to the Roman Wall” and this is still in print today, in its thirteenth edition.  Many noted experts on Roman Britain have edited the work including David Breeze, who was responsible for the most recent edition.

A lesser known aspect of Bruce’s life is his interest in Norman history and especially the Bayeux Tapestry. In July of 1851 during a short trip to Normandy Bruce conceived the idea of delivering some lectures on the Tapestry to the Newcastle Literary and Philosophical Society. He also decided that these should be illustrated by a full-size coloured facsimile of the Tapestry and the task of producing this fell to Bruce’s pupils at the Percy Street Academy. The work was drawn in pen and ink and coloured with watercolour on sheets of paper measuring 650mm high by 975mm wide, slightly larger than the original. The total length of the reproduction was between 75 and 80 metres.

Bruce subsequently delivered the lectures in January and February of 1853 with sections of the facsimile on display. A boy held a pointer to indicate features, while Bruce spoke.

The lectures formed the basis of Bruce’s book “The Bayeux Tapestry Elucidated” published in 1855, with 17 coloured plates. 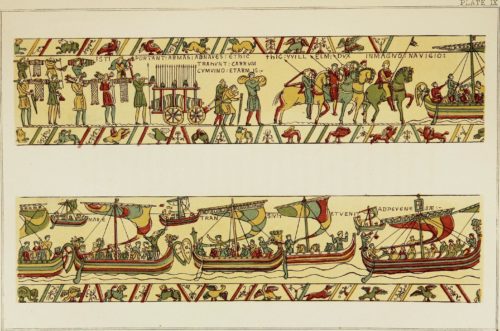 Image from The Bayeux Tapestry Elucidated

The facsimile was exhibited in various parts of the country, and even in Le Havre in Normandy. It still exists today in storage as part of the Library of the Society of Antiquaries of Newcastle upon Tyne, though now in poor condition.

As a result of his publications, lectures, teaching and membership of the Society of Antiquaries of Newcastle Upon Tyne, Bruce had established himself as a fondly regarded and respected member of not only academia, but also the wider local community. One example of this status is that he was used as a model for a figure in the oil painting “Building of the Roman Wall”, one of a famous series of paintings that are still displayed in the central hall at Wallington Hall. The well-known artist and poet William Bell Scott (1811 – 1890) who produced the image stated that “The only portrait here is that of Dr Bruce, the historian of the Wall who gave me a setting for the profile near the middle of the picture, of one of the labourers on the Wall.”

The figure modelled on Bruce is shown glancing at the attacking Caledonian’s while engaged in the vital work of building the Wall. This is surely a fitting and historic reward for Bruce’s tireless work on researching and promoting the Roman Wall. 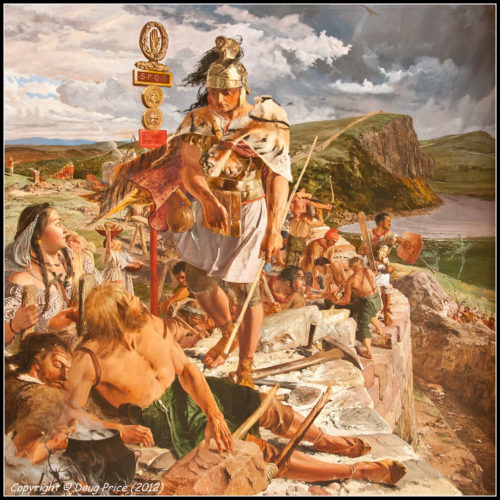 Building of The Roman Wall Painting at Wallington

After a long, productive and celebrated life John Collingwood Bruce died after a brief illness on 5 April 1892. His funeral procession which was attended by the great and the good of the North East stretched for over a mile, from the Great North Road to Jesmond Old Cemetery where he was buried. As a permanent memorial a sculptured marble sarcophagus within St Nicholas’s Cathedral in Newcastle shows the carved figure of Bruce lying with his feet on a copy of his book on the Roman Wall.

A fitting and well-deserved tribute indeed to a remarkable man.

If you are interested in finding out more about Bruce, a wonderful collection of the books and articles produced by him can be found in the Library of the Society of Antiquaries of Newcastle Upon Tyne. This is located in the Great North Museum: Hancock Library which is free for all to use, although temporarily closed due to the Covid-19 pandemic. Further information can be found at https://greatnorthmuseum.org.uk/collections/library-and-archive

I am grateful for the assistance to Howard Cleeve, of the Society of Antiquaries of Newcastle Upon Tyne, for his support in the production of this article, especially by providing his photographs of text from editions of the “Courant”.