My name is Dorothy and I have been a volunteer at South Shields Museum and Art Gallery for about two years. Over the last few months I have been cataloguing the possessions of the late Joseph Cunningham who ran a hairdressing business from the front room of his home in South Shields.

Joe was born on the 13th August 1913, not long before his father was sent to France, serving as a sergeant in the Durham Light Infantry, 7th Battalion.

When he left school Joe trained as a hairdresser and he was certified by The Hairdressers’ Registration Council in March 1938. There is a wonderful collection of his hairdressing equipment and paper ephemera as well as photographs and memorabilia from Joe’s time serving in the Green Howards during the Second World War.

Joe was stationed mainly in North Africa, as a private, then batman and finally in catering towards the end of the War. 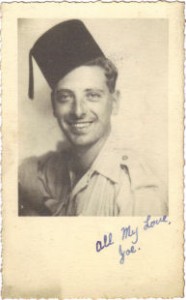 Joseph Cunningham in North Africa during the Second World War

After Joe’s death on 9th January 1999,the vast collection amassed during his working life was discovered, stored in an upstairs room, and gifted to the Museum. Over the coming months I would like to share some of these artefacts with you.