During the recent weeks of heavy snow we were reminded by the media of previous severe seasons such as the winter of 1947.  A comparison that isn’t altogether fair when we remember that, although the war was over, rationing and shortages were still prevalent back then.  Some of the documents kept by South Shields hairdresser, Joe Cunningham, remind us of just how difficult a time it was.

While Joe was away serving with the Green Howards his mother did her best to keep his business going and, three years after his return, he apparently tried to advertise for an assistant.  However, restrictions were still in place and no matter how much he needed the extra help it was not considered ‘essential work’.

Response from the local Employment Exchange

What would undoubtedly have been even more frustrating was the on-going need to curtail supplies of electricity at peak times during the winter months. 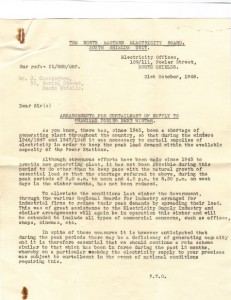 Letter from The North Eastern Electricity Board

This letter concerns the curtailment for the winter of 1948 – 1949, but it gives us an indication of the cuts in operation during the two previous winters.  The cuts would cause difficulty for everyone but trying to run a hairdressing business without electricity must have been almost impossible. Of course he could have closed the business on the particular day of curtailment to his premises but then, when we look at the details at the end of the letter, we see it will be every Tuesday and possibly Monday and Friday! 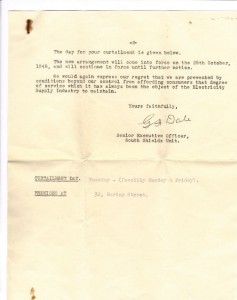 Page 2 of the Letter showing Curtailment to Joe’s Property

However, it wasn’t all bad news.  Jamal, one of his suppliers, wrote to inform him that they were gradually re-introducing the 20 oz bottle of Jamalotion which had been unavailable during the war. 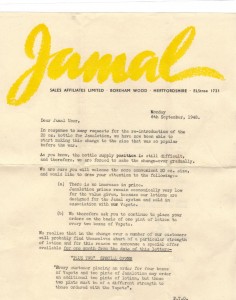 Good News from Jamal and a special offer

Over the page, the letter ends with the sentence ‘Here’s wishing you a really busy season.’ Poor Joe, lots of lotions but no certainty he can dry his customers’ hair.