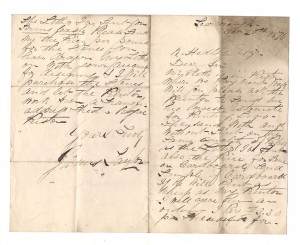 One of the research tasks I have most enjoyed since volunteering at the Laing has been helping to catalogue the correspondence of Newcastle artist Ralph Hedley that was left as part of a series of bequests by the artist’s late great-grandson, Julian Brown. In the last few weeks I have been looking at these letters with a fresh eye, working alongside Hedley expert John Millard, and last week I reacquainted myself with two interesting letters written to Hedley in 1876. They concern a dispute over some lithographs that Hedley had been commissioned to produce for the correspondent of the first letter (see photo above) who writes from Scarborough outlining his requirements in some detail: the disagreement comes to light in the second letter, written by one P.S. Matthews, this time addressed from the Theatre Royal in Preston. The dispute appears to relate to the ownership of some lithographing stones presumably from the afore-mentioned commission. When I first read the letters last Summer I was intrigued by how Hedley’s commission related to the Theatre Royal Preston, a place I have some acquaintance with, and the nature of both the commission and the dispute. 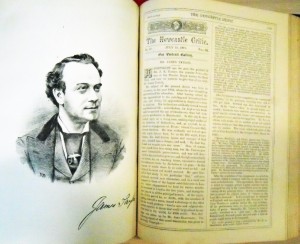 And now, for those who have read my previous post, the funny bit: I had long forgotten that the writer of the first letter was one James Taylor. John Millard had already decided to investigate the second James Taylor portrait in my last blog entry and traced it back to its original provenance, namely The Newcastle Critic of 10th July 1875 (see photo opposite) which reveals this James Taylor to be an actor and variety performer of some note, specialising in impersonations, and who was appearing at the Tyne Theatre in Newcastle. Indeed, his success in this profession began, according to the profile, which is full of amusing anecdotes and stories about Mr Taylor, with him winning a bizarre theatrical challenge, the “Comique Championship of the World” during which he “produced twelve new and original characters superior to those that could be produced by any other man in the world, for £200 a-side.”  These impersonations apparently included “his wonderful impersonation of Sarah Walker, followed by The Schoolboy, The Farmer, The Doleful Lover, Happy Old Man, and other songs…” 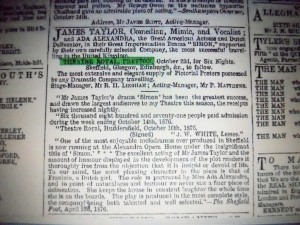 A further piece of research by Mr Millard uncovered the advertisement opposite from the 22nd October 1876 edition of The Era. Here, for those without bifocals, is the wording:

”One of the most enjoyable melodramas ever produced in Sheffield is now running at he Alexandra Opera House under the insignificant title of ‘Simon’. The excellent acting of Mr James Taylor and the amount of humour displayed in the development of the plot renders it thoroughly free from the objection that is in insipid or devoid of life. To our mind, the most pleasing character in that of Fraulein, a Dutch girl. The role is portrayed by Miss Ada Alexandra, and in point of naturalness and humour we never saw a finer piece of delineation. She keeps the house in constant laughter the whole time she is in the boards. The play is produced in the most complete style, the company being both talented and well selected.” –The Sheffield Post, April 23rd, 1876.

The dates of the performance at the Theatre Royal Preston in October 1876 fit nicely with the two aforementioned pieces of correspondence, Mr Taylor’s “most extensive and elegant supply of Pictorial Posters possessed by any Dramatic Company travelling” are presumably where Ralph Hedley’s portrait and lithographs come in, and here, too, is the Acting-Manager of the theatre, Mr. P. Matthews, author of the belligerent second letter to Ralph Hedley.  Miss Ada Alexandra, the so-called Dutch Delineator (a strange choice of career if ever there was one…) is every bit as intriguing as James Taylor, though her character of “Fraulein, a Dutch girl” reveals a dismal ignorance of European language and geography!!  But these real-life personalities of the Victorian theatre and music-hall world have, for me, more than a whiff of the fictional Lupin Pooter and his vaudevillian chums from the Holloway Comedians in George and Weedon Grossmith’s marvellous novel “Diary of a Nobody”.

I can only thank John Millard for bringing all this to light and solving so swiftly the mystery of the second James Taylor portrait. Thanks, too, to John for the photographs reproduced here.