It’s not all iron, steel and coal up North – by Lucy Deprez, Project Officer, A History of the North in 100 Objects

Hello. My name is Lucy Deprez and I have been the Project Officer working on A History of the North in 100 Objects, as part of the Great Exhibition of the North launching on 22 June this year.

The project started with an open call to all accredited museums across Northern England and pretty soon nominations started to fly in. In order for the team to make a selection, we really had to boil down what ‘The North’ is and what is its identity? What are the things most associated with it? What images does it bring to mind? What story could we create out of unrelated museum objects? Early on it was obvious the overriding narrative would concern coal, iron, cotton, steel, ships and railways and would be set largely in the 19th century.

As it takes a while for recent history to become ‘historised’, so to speak, and for objects from living memory to be accessioned into museum collections, we weren’t surprised by the themes early nominations represented. We were, however, curious about what the 20th and 21st centuries looked like in the North, after the decline of the heavy industry that made it great in the Victorian era. The first thing that sprung to mind was entertainment, specifically pop music. The North led the world in the mid-late 20th century with this new art form, from Merseybeat to House music to Britpop, so when we did a second call out with specific categories where we were under-represented, pop music was top of the list. Although we didn’t end up covering every genre, it did result in three of my favourite objects being nominated: Bedspread – All You Need is Love at the Museum of Liverpool, Love You More – Single Record Sleeve by Buzzcocks at Manchester Metropolitan University Special Collections, and Astral Navigations at Wakefield Museum. 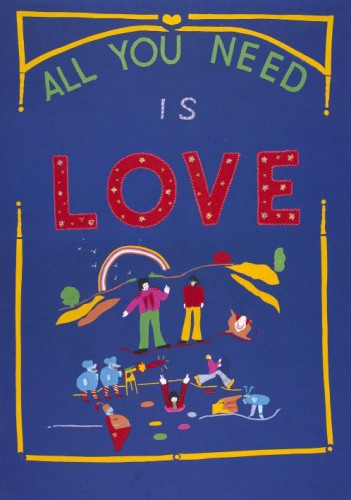 Bedspread – All You Need is Love.
Museum of Liverpool, National Museums Liverpool

The bedspread brings together two Northern people on the world’s stage. The first, John Lennon, of course needs little introduction: the Liverpudlian lad whose songs have inspired generations and who, at the end of the 1960s, was looking for innovative ways to oppose conflict, most specifically the Vietnam war which was raging at the time. His well-documented idea was to stage a series of ‘bed-ins’ with his new bride, Japanese conceptual artist Yoko Ono. The most famous of these was during their honeymoon in Montreal where they stayed in bed for a week, talking about peace to the press, with an invited audience of musicians, psychologists and beat poets. The second, another northerner, Yorkshire-born designer Christine Kemp who was living in Canada, had made a large room divider for her studio, adorned with Beatles themed appliqué designs – characters from their animated film Yellow Submarine and the words All You Needs is Love, the name of their famous hit. Discovering that John and Yoko were in her new home town, she wrapped the room divider up in a Union Jack and made her way to the Queen Elizabeth Hotel to bestow it upon the pair as a wedding gift, a spontaneous act of kindness motivated by their message of peace and love. This object is particularly inspiring as it not only puts the North on a truly global platform, it reminds us of the man whose life started in the Liverpool village of Wavertree, and ended on the island of Manhattan as one of the most famous and influential people of the century. 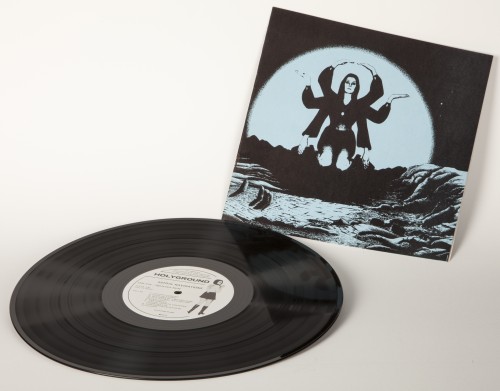 The second object is a record called Astral Navigations, produced by what is thought to be the world’s first independent record label Holyground Records, by Lightyears Away and Thundermother.  Formed in a house on Wakefield’s Bread Street in 1966, Holyground released a range of albums, variously described as folk, rock, progressive, but all capturing the psychedelic mood of the time. They would blaze the trail of ‘indie’ music in the North that would come to prominence from the late 70s to mid-90s. This beautifully packaged record’s original 1971 pressing is so rare even Wakefield Museum don’t own a copy; theirs comes from a 1980 re-release.

The third object that takes us further through the journey of pop music in 20th century Northern England is ‘Love You More – Single Record Sleeve’ by Buzzcocks from 1978. Two years earlier in 1976,  the event that has now gone down in history as the birth of punk music, the first Sex Pistols’ gig at Manchester’s Lesser Free Trade Hall, took place. Although it has been estimated that 7,500 people claimed to be there at this pivotal moment, a more realistic number of attendees at the 150 capacity venue is thought to be 35-40. We know Howard Devoto and Pete Shelley of Buzzcocks were among this number as they organised it. They went on to release iconic punk songs What Do I get and Ever Fallen in Love with Someone. Devoto, also a member of Magazine and Luxuria, had a cameo in Michael Winterbottom’s 2002 film about the Manchester music scene 24 Hour Party People. The sleeve itself was designed by Malcolm Garett, a pioneer of digital design, who was studying at Manchester Polytechnic (now Manchester Metropolitan University, where you can find this object) at the time, where he influenced fellow student Peter Saville. Saville would also become a master of the Manchester record sleeve during his time designing for Factory Records, a company of which he was a founding partner. 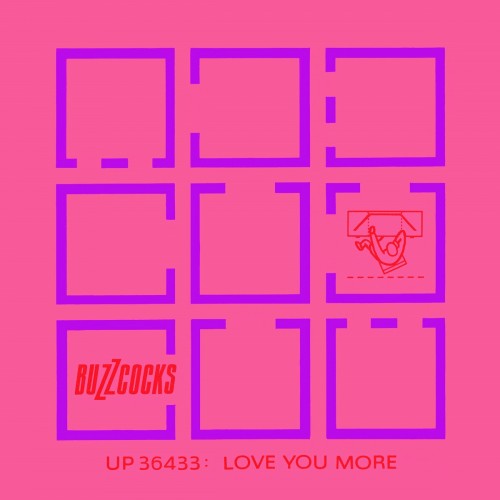 If I could choose any object myself to include on the list it would be the ticket to an Oasis concert at Newcastle Arena on 17 September 1997, featured in Discovery Museum’s Newcastle Story gallery.  It’s for a very personal reason: I was there and I have an identical ticket at home. While I might feel surprised that objects from my lifetime have already been accessioned into museum collections, it brings back so many memories from my formative years, when getting my hands on a ticket to see Oasis play live was pretty much what I lived for. Coming back from a family holiday on the day the tickets were released, I missed out initially and spent the summer mourning my loss. The day before the concert, my mother managed to get two ‘restricted view’ tickets released at the last minute and made my dreams come true!  I now have a collection of 5 tickets as I managed to catch them another 4 times, latterly on their last tour at Sunderland’s Stadium of Light.

These objects and their stories are mere starting points, keys to unlock the bigger picture of how the North West both revolutionised and dominated popular music at home and further afield in the 20th century. They show us how museum objects are not just dusty old things from the past; they can spark memories, feelings and perhaps previously untold narratives, especially when they come from living memory.

Putting together this project, researching and writing about all of these fascinating objects has been a great journey, I’ve learned a lot, not just about individual objects but about this thing called ‘The North’. I have been astonished at the amount of ‘firsts’ that occurred in our region and how many times the north has quite literally led the world in science, engineering, art, politics and of course music.

I would like to take this opportunity to thank all of the participating organisations: the Museum Development Providers in their respective regions; HM Government for commissioning GEOTN; our funders the Heritage Lottery Fund; our web developers at Jump; our project manager Katherine Pearson at Flo-Culture; voice artist Tim Crump for endless patience with my rewrites; NewcastleGateshead Initiative for making this part of the wider Great Exhibition of the North programme; Bill Griffiths, Sarah Younas and Alison Maw, as well as the Communications and Design teams at TWAM for invaluable support; and my family for letting me bang on about these objects for months!

I hope you enjoy using the website as much as I have enjoyed creating its content. Please take time to work through the site; it’s a truly a remarkable journey from the everyday to the esoteric to the ground-breaking. You will learn things you didn’t know and new facts about the familiar. Don’t forget to make your own gallery and to share with hashtag #100objectsnorth