It’s a funny thing, working in a museum.  You get so used to the extraordinary things around you that they sometimes seem to fade into the background.  Then, suddenly, something happens to inspire you all over again.  I come to work at Discovery Museum every day and often don’t even notice our most prominent exhibit, the astounding Turbinia.  She sits there, quietly dominating the place as I walk past engrossed in thoughts about the day ahead or what I’m having for tea, and then something crops up that makes me appreciate her all over again.  Once, it was overhearing a visitor entering the building for the first time and exclaiming “Wow!”.  Most recently it was finding a couple of old newspaper cuttings which brought Turbinia to life like nothing else…

The Newcastle Daily Chronicle was quite taken with Charles Parsons’ experimental steam turbine-driven boat when she was new, although you’d never guess it from their distinctly underwhelming headline on December 22nd 1896: A Marine Motor.  The Engines of the Turbinia.  An Important Engineering Development.  After describing the ins and outs (or should that be “rounds and rounds”?) of the turbine machinery, the reporter related this impression of Turbinia’s appearance as she lay in her berth at Wallsend:-

“She is a long, rakish looking craft…and her neat lines instinctively suggest the idea of great speed.  She wears a perpetual look of eagerness to be plunging through the water with a green wave rising to her decks on either side, and a long white trail in her wake.”

Berthed at Wallsend – the calm before the storm…

But how did she go?  What was our demure little museum boat like when she was alive?  Well, fast forward to April 22nd 1897 and another article, The New Marine Motor.  A Trip in the Turbinia.  38 Miles An Hour at Sea.  This time, our intrepid reporter was hanging on for dear life as Turbinia exceeded 32 knots against the Hartley measured mile:-

“…like a living creature endowed with intelligence, the staunch little vessel seemed palpitating with a resolve to show what she could do.  The deck openings were fastened down, the air, driven by a fan, roared through the fires and into the chimney, steam was pressed into the motors, and the vessel leaped forwards as a greyhound darts from the leash.  It was a moment worth suffering any amount of discomfort to experience; and, uncanny as it was, one got used to it, and revelled in the excitement.  It was like riding on the ridge of a snow-plough dashing into a ten-feet drift.  The speed of the vessel made a gale of the wind.  The stem was lifted by the impulse clear from the water, as though the vessel would have leaped into the air.  On either side rose a creamy wave, whose fringe was whipped by the wind, and dashed along the deck like icy pellets.  As the stem rose, the stern was depressed.  The propellers, revolving with terrific rapidity, set the water a-boiling, and a broad band of heaving foam stretched, like a great snake on the water, far into the distance.” 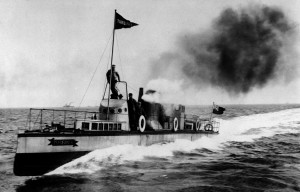 Imagine if we could hear this picture!

Those nine propellers, glinting now behind the museum’s safety barrier, flew round at up to 2400 revolutions per minute.  That’s 40 complete turns every second!  Through them, over 2000 horsepower pushed against the water, burying the stern in the sea and lifting the bow clean above it just like a modern speedboat.  Riding this hurricane, the reporter experienced

“a wild endeavour to hold the component parts of one’s being together; clutching at the deck very much as a cat holds to a wall.” 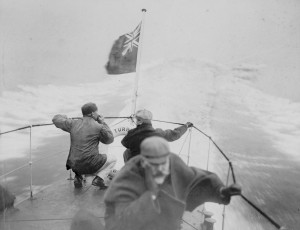 Witnesses on other vessels reported that

“all they saw of Turbinia was a bow emerging from a huge wave and a flame from the funnel flickering into the air.”

(From “Turbinia – The story of Charles Parsons and his Ocean Greyhound” by Ken Smith, page 18.)

“wind round that smoke-stack like a scarf round your neck”!

(Turbinia’s steersman Robert Barnard, in “Turbinia – The story of Charles Parsons and his Ocean Greyhound” by Ken Smith, page 20.)

It’s awesome to think that our little Turbinia, nestling so quietly between the museum’s gift shop and the Archives offices, was once a roaring, churning, fire-breathing beast, the fastest ship in the world!