Part 2 of a guest post by Gil Dye who is a volunteer at Discovery Museum in Newcastle.

From a lacemaker’s point of view a small collar – ref: TWCMS_ H2387 –  is one of the most interesting tape-lace collars in the TWAM collection. It is a good example of Branscombe Point, with many distinctive features of this lace including: narrow machine-made tape; a purled edge; cut-works (woven spiders); knibs (button-holed bars with small loops) and a variety of needle-made stitches and fillings.

Branscombe lacemakers developed many new stitch combinations and often gave them names relating either to how they looked, or the person who first used that stitch grouping. The Branscombe names listed below are linked to numbers on the pictures. 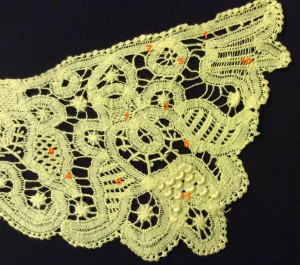 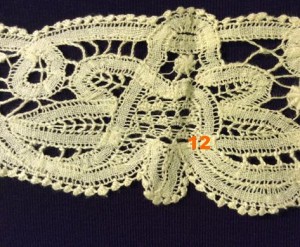 Stitches from the centre of the collar: 12. Butterfly 13. Bars and double knot 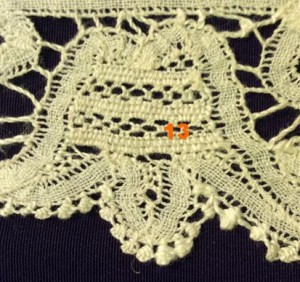 Stitches from the centre of the collar: 12. Butterfly 13. Bars and double knot

Also in this book are detailed instructions for preparing patterns and tape outlines, and working cut-works, knibs, purling and a variety of fillings.

Fillings numbered 10 and 11 are unusual, and do not appear in either of the books mentioned.  Although it is many years since I did any Branscombe point lace it seemed that working a sample would be the best way to test my theories about how the stitches were worked.

I started by tacking a traditional Branscombe tape around the outline of a candle, with a diagonal across the centre. I then used Madeira Tanne 30 to whip round the inside edge and neatened the corners before working the stitches.

For the bullion loops (stitch 11) I started on the long side of the lower section with  two rows of single button-hole stitch, the first row corded the second whipped, next:

Repeated from* to fill space – twisted stitches positioned above ones on the row below.

Bullion stitches then worked by wrapping a thread four times round 2 twisted stitches – without pulling tight – then  whipping the bundle before moving diagonally (behind the work) to the next pair of twisted stitches. 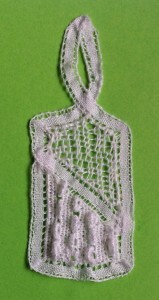 Sample attempt at stitches 10 and 11

For stitch 10, I first stretched horizontals across the space, then  started at the base and whipped twice round each horizontal to the top, fastened the thread to the tape and whipped back with the two lines of whipping together. 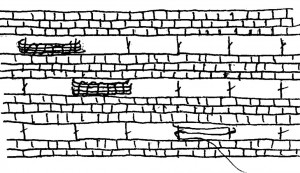 I have probably used a softer thread than the original – which results in a less crisp finish – and my tension definitely leaves a lot to be desired; this has resulted in neither stitch looking exactly like the original. However the stitches are probably technically correct.

A surprising discovery in the  Discovery collection  is a second tape collar – TWCMS_H2367 – that is almost identical in shape to the  Branscombe  Point collar. This is also a tape lace, but it does not have the quality of workmanship of the  Branscombe version, and has a machine-made picot edging instead of hand-stitched loops.

In the days before scanning and photocopiers a standard way of copying a pattern was to make a rubbing by placing existing lace on a hard surface, covering it with a sheet of brown (or tracing) paper and rubbing over it with heelball, in the same way that we might today make a brass rubbing.  This does not make a particularly accurate copy.

The initial impression of the ends of the two collars in the pictures below does not suggest any close likeness, however a closer look shows that  the paths of the tapes are actually quite similar and both could have been taken from the same rubbing, or one from a rubbing of the other. There is no information on the museum database providing provenance for either of these pieces, however the closeness of the accession numbers – H2387 and H2367 – indicates they probably came into the collection at the same time and from the same source.  It is likely that both collars date from around 1900.