Last year I wrote a short blog about a new addition to the Tyne & Wear Archives collections – an apprenticeship register of the Incorporated Company of Tailors of Newcastle upon Tyne dating from the Tudor period. The register was accompanied by several other items relating to the Tailors guild and one of these has turned out to be of outstanding historical interest. The document in question is a minute book recording the meetings of tailors in Newcastle upon Tyne from 1682 to 1689. At this time the Tailors seem to have met in Manor Chare, near the junction with Pilgrim street. 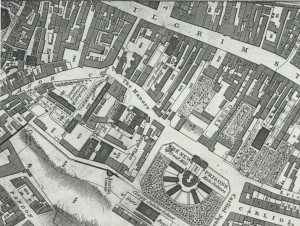 Part of Thomas Oliver's Map of Newcastle upon Tyne, 1830

The minute book covers an interesting period of British history. In 1688 King James II of England fled the country and was replaced on the throne by the joint monarchy of William and Mary. I thought it would be interesting to see whether the minute book contained any references to these national events. My research didn’t reveal any details of the country’s political struggles, but what I did find was just as compelling – an account of the petty infighting between the tailors of Newcastle upon Tyne.

The minute book is a rare survival. While the lives of the wealthy are relatively well documented through letters and diaries this is not the case for all sections of society.  It’s unusual to get an insight into the daily lives and behaviour of humble tradesmen during the Seventeenth Century. Low levels of literacy meant that few people would’ve been able to write their thoughts and feelings. It’s also unusual for disputes to be recorded in such colourful language.

A browse through the minutes for 1688 reveals that the tailors of Newcastle upon Tyne fell out with each other on a regular basis. There was also little respect for authority amongst certain members, with three tailors in particular appearing in the minute book as repeat offenders – John Charlton, John Watson and Henry Wallis. John Charlton’s list of misdemeanours at the tailor’s guild meeting on 9 January 1688, is especially long and must have cost him a small fortune in fines. 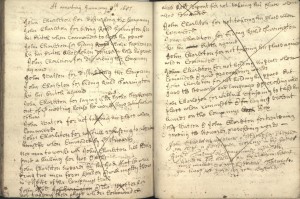 “John Charlton for disturbing the Company.

John Charlton for biding Richd Farrington kis his britch [backside] when commanded to hold his peace.

John Charlton for biding Nicho. Stephenson kis his britch also when desired to hold his peace.

John Watson for disturbing the Company

John Charlton for saying if he had Nicho. Stephenson out of the meeting house he would have satisfaction of him.

John Watson for not takeing his place when commanded.

John Charlton for wilfull refuseing to absent himselfe when commanded by the stewards.

Noe man to worke with John Charlton till he had paid a shilling for two oaths.

This last comment might seem quite harmless but would have been taken very seriously by the Company. The employment of men from outside (or ‘foreigners’ as they were called) would have been a real slap in the face to the Company’s rules. The entries carry on in similar vein for another page. The final entries read:

“John Charlton informes that Nicholas Stephenson kept a foreigner working in his garret.

Richd Farington complaines agst John Charlton for holding up his hands in threatening manner & saying Sirrah Farington you have not payd for your Bastards”.

This remark was a slur on Richard Farington’s name with Charlton appearing to accuse him of fathering children out of wedlock and then not paying their maintenance. The minute book doesn’t say that John Charlton was drunk but his behaviour has all the hallmarks of a man out of control.

The minutes of the meeting on 12 April 1688 give us our first introduction to Henry Wallis, who seems to have had a violent and vindictive streak. 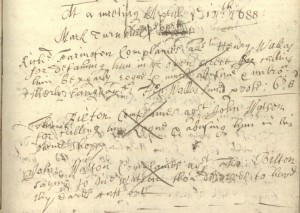 John Watson Complaines agst Tho Bilton saying to Jno Watson thou deserves to have thy Eares cutt out”.

There was clearly considerable rivalry amongst the various members of the Company of Tailors. Members were quite prepared to slander each other to get work as this entry from 17 April 1688 shows:

“Tho. Joplin complains of Thos Bilton for seeking worke from him & saying he was blind. Tho Bilton complains that Tho Jopling informes his customers that Tho Bilton cannot performe worke himself but payed to get others to doe it whereby the worke is botched”.

From June onwards the entries become even more interesting as they document what appears to be a vindictive campaign against John Shaftoe, a steward of the Company. The main culprit is again Henry Wallis.

“Henry Wallis for an oath

Henry Wallis for Calling both the Stewards Roges [rogues] 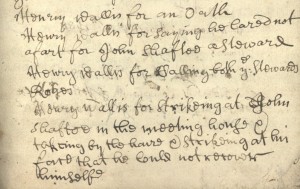 John Shaftoe had endured a lot already but if anything the abuse he suffered became more widespread with other members joining in.

“John Shaftoe complaines agst Henry Wallis for abusing and railing agst him in the open street & threatened to beat him.

John Shaftoe & Tho. Pattison complaines agst Geo. Marshall & Robert Vipont for calling them cheaters on the open keay [quay] & seemed to justify the words when they were reproved”.

“John Shaftoe Complaines against Tho. Prockter for calling him botcher & said he would prove it & that he never did a piece of good worke in his life”.

“John Shaftoe complaines agst Mark Trumble for bidding him kiss his arse when he discharged Mark working aboard of a ship at the instance of Thomas Prockter & Mark Trumble further sayd that he would take noe discharge from John Shaftoe”.

With position comes responsibility, and sometimes a fair amount of flak. Certainly John Shaftoe’s experience as Steward seems to have brought him into confrontation with his fellow members. I can’t help wondering how typical these events were in Seventeenth Century Newcastle. There’s no reason to believe that tailors were any rowdier than other tradesmen. That leads me to assume that infighting and disrespect for authority may have been quite common and that the only unusual circumstance in this story is the detail in which events have been recorded.

Our Seventeenth Century ancestors can sometimes seem very distant and remote. Their daily lives were so unlike ours and they had a different world picture, yet the descriptions of these tailors guild meetings really bring the people involved to life. Their behaviour cuts across the centuries and has a familiarity that reminds us that human nature hasn’t changed so very much in 325 years. The minute book should be of great interest to both social and family historians. It is a truly fascinating addition to the Archives.

7 Responses to Insults and infighting in Seventeenth Century Newcastle