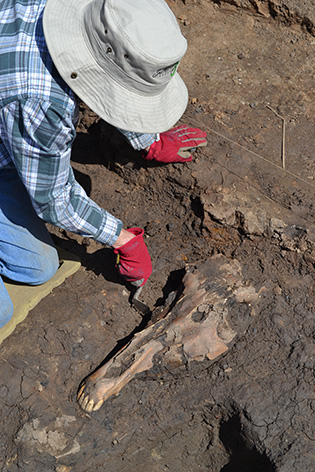 A horse’s skull under excavation at South Shields Roman Fort

As part of the Hadrian’s Cavalry exhibition here at Arbeia we have a display of photographs of items from our collection showing images of horses. The most intriguing shows a Roman horse skull under excavation. The skull was found a couple of years ago, in the ditch outside the fort. It is of a male horse which was over 30 years old when it died, so it must have been well-looked after to have lived so long. It had further life after death – there was no lower jaw present, which suggests it was probably put in the ditch as a skull without any flesh on it. The skull might have previously been on display somewhere, or it might have been important to have a skull rather than a horse’s head for whatever ritual required it to be carefully placed upright and across the base of the ditch. But what exactly was that ritual? No-one knows – and such is archaeology, no-one will ever know again.