HMS Kelly: Commemorating the men who built her and served on her

My last two blogs looked at the First World War experiences of George Cuthbertson, a marine engineer from South Shields and Annie Hamilton, a nurse. This blog looks at the Second World War and in particular the story of a much loved and admired warship HMS Kelly. It remembers the skill of the men who built and repaired the ‘Kelly’ and the great courage of those who served on her and gave their lives in the defence of their country. 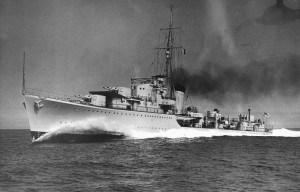 HMS Kelly was built on the River Tyne at Hebburn by the illustrious shipbuilding and engineering firm Hawthorn Leslie.  During the Second World War the shipyard’s output was remarkable. It included an aircraft carrier, three cruisers, two fast minelayers and 16 flotilla leaders and destroyers, not to mention a whole host of other vessels for the Royal and Merchant Navies.  This was all achieved despite the difficulties caused by the War such as air raids and blackouts. The Shop Stewards Committee wrote:

“We felt that every ship was a vital contribution to victory; that every rivet hammered home was another nail in Hitler’s coffin. More important still, we knew that if we did not produce the ships the alternative was unthinkable disaster” (Our Ships at War by R. & W. Hawthorn Leslie & Co. Ltd).

The keel for HMS Kelly was laid on 26 August 1937 and she took two years to complete. She was a K-Class destroyer, named after the Admiral of the Fleet, Sir John Kelly whose daughter launched her on 25 October 1938. Her Captain was Lord Louis Mountbatten. 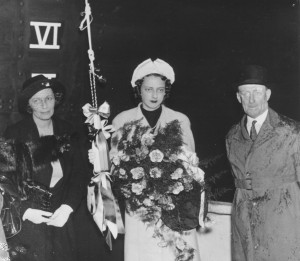 After War was declared on 3 September 1939 HMS Kelly was straight into the thick of the conflict. The following day together with HMS Acheron she helped to sink a u-boat and on 12 September HMS Kelly brought the Duke of Windsor (the former King Edward VIII) back to England from Le Havre.

During her short career the ‘Kelly’ suffered a lot of bad luck. In December 1939 her stern was damaged after she struck a German mine just off the River Tyne. Repairs were not completed until the following February. Much worse was to come. On 9 May 1940, while searching for German minelayers in the North Sea, she was torpedoed with the loss of 27 lives. Many of these men are buried in Hebburn Cemetery.

With great difficulty she was towed back to Hawthorn Leslie’s shipyard by HMS Bulldog. Lord Mountbatten wrote:

“…when this perilous journey began, my Navigator asked me where we should make for – and without a second’s hesitation I replied: Hebburn. I knew the ship’s birthplace was where she should return; and not only was the Kelly given a new lease of life, but my decision was more than justified by the real human sympathy and interest alone which was shown to our wounded and killed” (Our Ships at War by R. & W. Hawthorn Leslie & Co. Ltd). 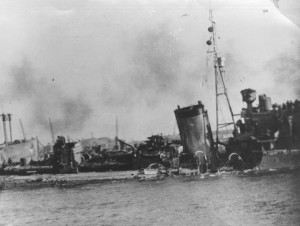 It’s also worth recording the comments of the Controller of the Navy who wrote:

“Kelly was got into harbour not only by the good seamanship of the officers and men, but also on account of the excellent workmanship which ensured the watertightness of the other compartments. A single defective rivet might have finished her” (Our Ships at War by R. & W. Hawthorn Leslie & Co. Ltd). 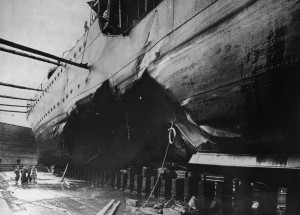 HMS Kelly was assessed and the necessary repairs carried out by the workers at Hawthorn Leslie.  The Archives holds a photograph album kept by the firm, which shows the full extent of the damage. These images are included in a new flickr set. 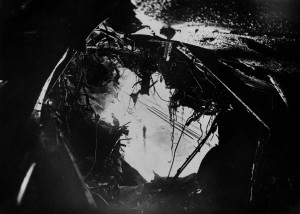 The repairs were completed and the ‘Kelly’ returned to service in December 1940. By May 1941 she was leading the 5th Destroyer Flotilla in the Mediterranean. Tragically, on 23 May while returning to Alexandria she was bombed and sunk by the Luftwaffe. Survivors were picked up by HMS Kipling but the loss of life was terrible. One hundred and thirty men were killed and they are remembered in memorials at Hebburn Cemetery, together with the 27 crew members who perished in May 1940.

The memorials were erected by the survivors of HMS Kelly and the workers at Hawthorn Leslie. Mountbatten commented on this writing:

“None of us will forget how members of the Yard contributed to the Memorial which was put up in the Hebburn Cemetery, or the kindness and sympathy of those who tended the grave. There is a strong mutual bond between the men who build our ships and the men who sail in them and fight in them; and this has perhaps never been more clearly shown than it was between us in the Kelly and you in the Yard” (Our Ships at War by R. & W. Hawthorn Leslie & Co. Ltd). 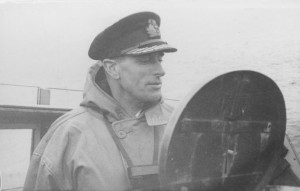 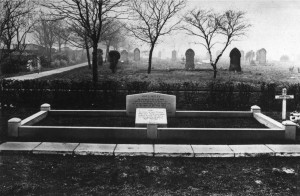 100 Responses to HMS Kelly: Commemorating the men who built her and served on her