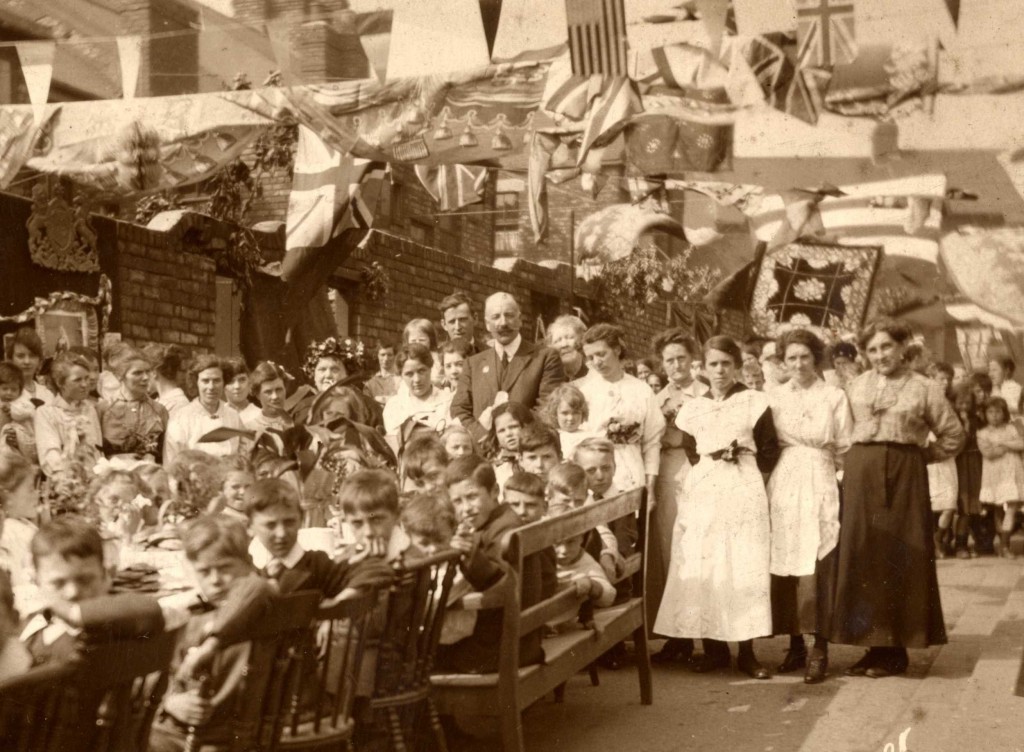 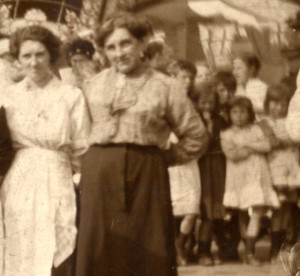 This sunny scene in Byker shows one of hundreds of back-lane tea parties that took place in Newcastle in the lovely hot summer of 1919. The parties celebrated the Peace Treaty of June 28th, which finally ended the First World War. Women were generally in charge of the parties. Often, everyone joined in, but the teas were intended particularly for the children, who hadn’t had many treats since the start of the war in 1914. The children in the background of this photo are either waiting for a second sitting or have come from surrounding streets – the parties became entertainment for neighbours as well as the party-goers.

The parties were particularly popular in Elswick and the West End of Newcastle, said The Illustrated Chronicle of 29th July:

Never have Newcastle youngsters had such a glorious time as at present. Victory teas have become the fashion, especially in the West End district. Mothers in the various streets are vieing with each other, with the result that the digestive organs of some of the kiddies are in imminent danger.

This caption accompanied a double-page photo spread headed ‘Back Lanes in Newcastle West-End Transformed.’ It was one of many similar photo stories in the paper in the summer of 1919 (copies are kept in the City Library Local Studies): 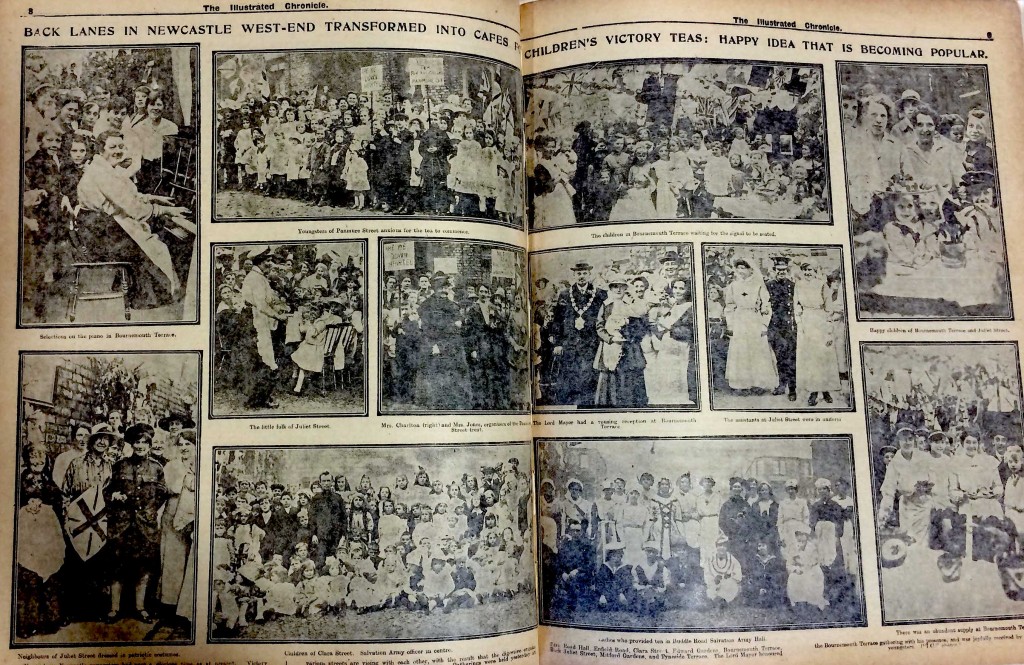 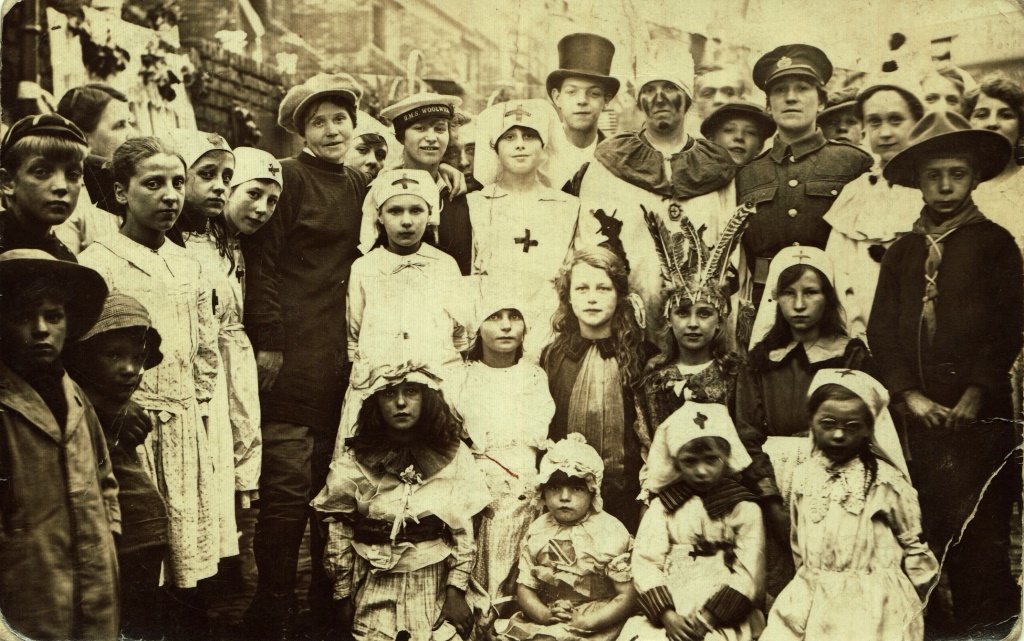 This is one of the West End parties mentioned by the Illustrated Chronicle. It was held on August 4th in the back lane of Gloucester Road and Normanton Terrace, Elswick. It also took in Ashfield Terrace East, which continued southwards from Gloucester Road. The Evening Chronicle edition that evening reported that 30 or 40 street teas had taken place earlier in the day. The party was mentioned a week later in a follow-up story:

About 80 children and their parents of Normanton Terrace and Gloucester Road were entertained to a victory tea. The proceedings were opened by Mr. J. C Bell, manager of the Brighton Picture Hall, who invited the children to a picture show. 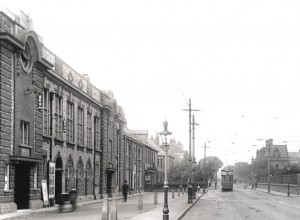 The children walked up Westgate Road a little way to the Picture Hall (cinema) opposite Brighton Grove. It’s shown in a photograph from about 1912 from Newcastle Libraries Flickr stream (ref. 068709). It is now a bingo hall. After the expenses of the party were covered, the organisers made a donation for blinded servicemen – the usual charity for the celebration teas. In the photograph below left, there’s another view of the same celebration in the back lane. The lane itself is still there though it now only serves Normanton Terrace. The houses of Gloucester Road and Ashfield Terrace East have been knocked down, like a lot of the places mentioned in the Chronicle reports of back-lane tea parties. 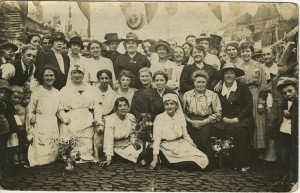 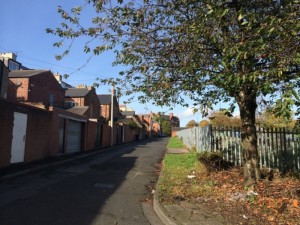 Occasionally, things went awry. The Evening Chronicle reported that at a party on Hooper’s Field in Gosforth on August 6th, someone stole the cakes provided for the tea. While trying to track down the thief, one of the women missed the official photograph. She’d paid 2 shillings for the photo – a considerable amount of money. During an argument over getting her money back, she punched the woman in charge of the photo money in the eye. She followed up by taking off her hat, with its big hatpin, and swiping the other woman with it. It all ended in court.

One or two killjoys wrote to the newspaper complaining about children begging for the loan of cups and saucers, decorations, or for money to fund Victory teas. More seriously, in early August, the Chief Constable of Gateshead banned further open-air teas in that area, citing public drunkenness and trees damaged by taking branches for decorations. In a rather sad story, the Chronicle of August 18th reported the conviction of young lads for damage:

At Gateshead, this morning, four boys aged respectively, 9, 12, 13, and 14 years, charged with having done wilful damage to shrubs on Windmill Hills on August 9… When caught, the boys said they were having a Victory tea and that their mothers had sent them to get the branches for decorations… Chief Constable Ogle remarked that the father of two of the boys had been killed in the war…. a fine of 3s and 1s damage on each of the boys [was imposed] … 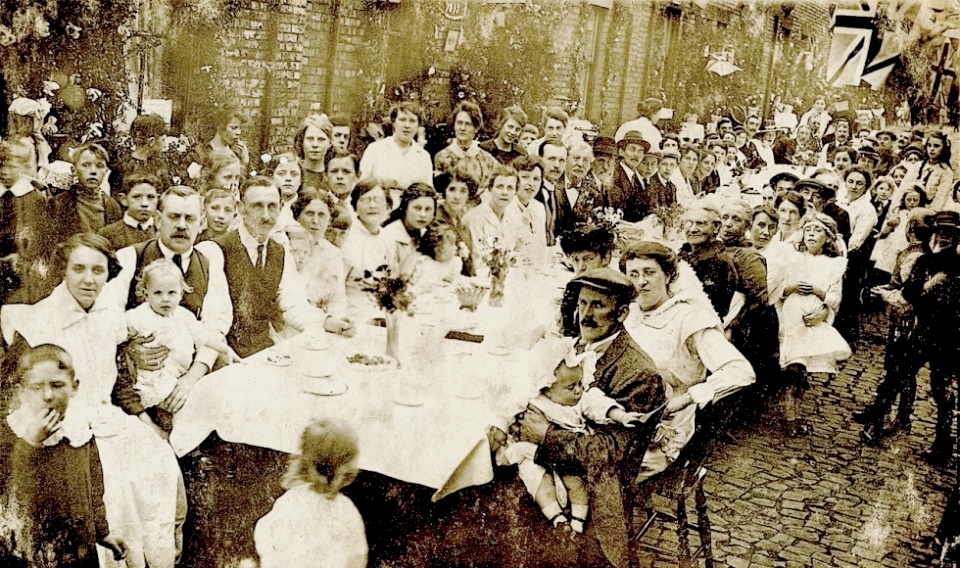 Most of the ‘Peace’ and ‘Victory’ teas were happy events, like this party in the back lane of Mark Street, Wallsend (it’s now gone, but was one of the streets off Hadrian Road).

There was no one living in Mark Street who had enough spare cash to pay to be listed in Ward’s Directory for the area of 1919. The same was true of Janet Street, Byker, which is pictured below. Even when people didn’t have very much, the community came together to give the children a treat. 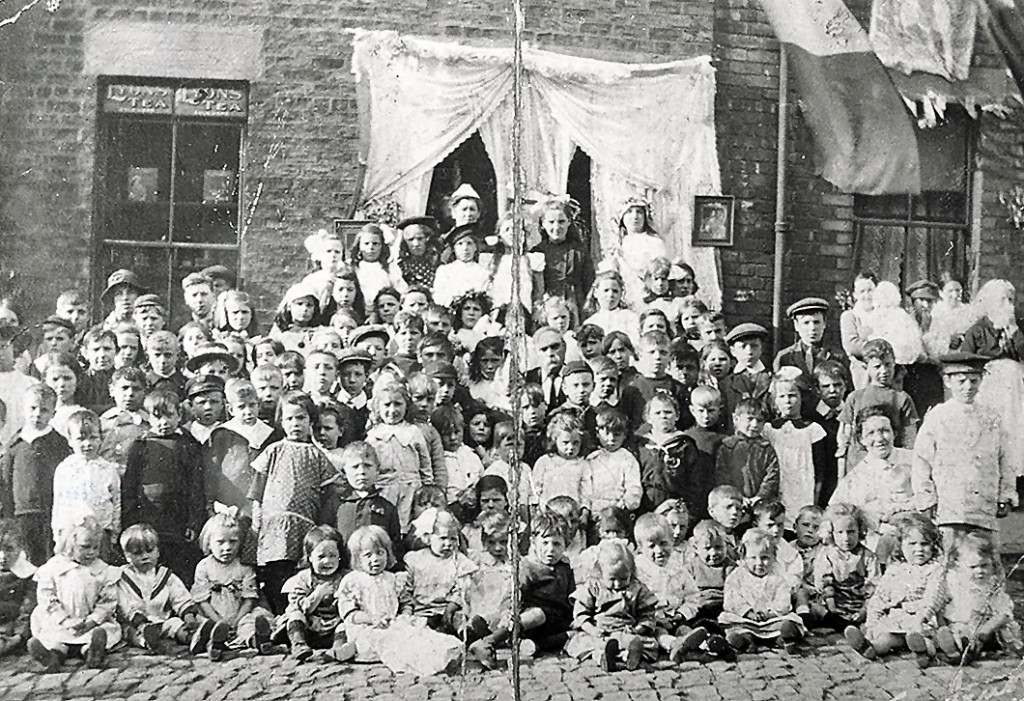 The Janet Street children’s tea in Byker was part of a group of large parties in neighbouring streets which were reported in The Evening Chronicle of August 11th 1919:

Four teas in Bolam Street (for 200 children), top Janet Street (150), lower Janet Street (over 100), and Oban Road, Byker (122) were opened by Mr. M. Fineran, one of the local Guardians. Sports were held, and prizes were presented by Mrs. M. Fineran. The Industrial School band was present, and played selections. Mr. Fineran handed over £2. 10s 6d., which was subscribed by the residents, and thanked Mr. Robinson, for allowing the band to be present. The proprietor of the Raby [Picture] Hall, Mr. E. Moffit, was thanked for supplying the Oban Road with electric light for the dancing.

The Board of Guardians were elected local officials who administered Poor Law Relief to needy families (as well as running their local Workhouse), and were important people in their area. It seems that the Guardians were involved in the organisation of these four big parties, and may have contributed the sports prizes and perhaps more. In this case, the charitable collection from the residents was donated to the local Industrial School, which was one of a national network of schools set up to educate poor children in need and those who might be in danger of getting into trouble.

Janet Street was the pilot project for the Byker estate redevelopment, which includes the Byker Wall, 1969 to 1983. You can read about it here.

The last word on the parties goes to the writer of a letter in The Evening Chronicle, on August 18th – one of many letters in support of the street celebrations:

The children will remember these Victory teas in their own back lanes (how like the women of Tyneside to laugh at obstacles and turn dreary streets into a paradise for a day at least!) for the rest of their lives…

There are photographs of Victory tea parties and lots more fascinating items in the Discovery Museum exhibition, When the Lamps Went Out: Life on Tyneside in the First World War.