One of the band of Volunteers who are based in the Great North Museum: Hancock Library is Elizabeth Garnett who is undertaking an MA in Museum Studies at Newcastle University. Elizabeth lives in Morpeth and has been investigating one of that town’s famous sons, William Turner and his important and fascinating book ‘A New Herball’. A first edition of this work, published in 1551 has  recently been donated to the Library of the Natural History Society of Northumbria which is located in the Great North Museum: Hancock Library.

The book can definitely no longer claim to be ‘new’ anymore, since it is now over 460 years old. Regardless of its potentially misleading title, this book is important in that it shows ideas and beliefs held in the 16th century. It marks a time when the properties of plants were being studied and recorded in English for the first time. It also dates from a period where technology was being developed to publish books faster and more cheaply, helping to increase the spread of information to ordinary people. 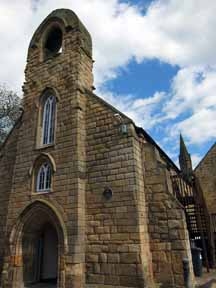 William Turner was a local lad, born in Morpeth, Northumberland in or around 1508, under the reign of Henry VIII. It is thought that he was the son of a tanner, but not much else is known about his early years or education. It is assumed that his first school was at the Chantry in Morpeth, on which there is now a plaque to commemorate him. 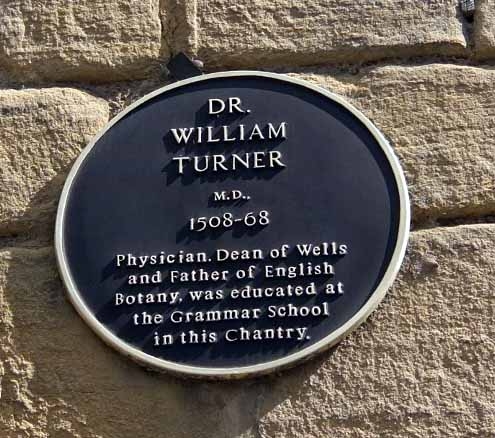 He must have shown a considerable amount of promise as he went to Pembroke College at Cambridge University. His place here was funded by Lord Wentworth who acted as his patron. It was here that he completed a B.A. in 1530 and an M.A. in 1533. Turner appears to have had a range of interests alongside that of plants and their properties. He wrote the first printed book dedicated entirely to birds in 1544. His Calvinist beliefs were so strong that they appear to have resulted in his imprisonment at some point. After his release he spent time abroad in Europe, notably Italy where it is thought that he received his doctorate in medicine. On his return to England his medical knowledge must have aided his appointment as the physician to the Duke of Somerset.  All in all, not bad for ‘a bairn from ‘peth’ (translation – a child from Morpeth).

The importance of ‘A New Herball’ can best be understood if you are aware of what was going on at the time in which it was written. The use of the moveable-type printing press, which was developed in Germanyaround 1440, had spread throughout Europe. A simple explanation of how this press worked is that it was like a giant stamp. Individual wooden blocks of letters were combined to construct words that were then used to print the required text. This text could then be printed in large numbers. Once enough copies had been printed the wooden letters could be re-used to create a new text. This meant that the process of printing became fast and efficient. For the first time books could be published relatively quickly in larger quantities and this resulted in more information being made available to a wider audience. Its equivalent in our time is the development of the Internet, email and the mobile phone.

The changes in religious beliefs and ideas made it an insecure period. Henry VIII had split England from the authority of the Pope and Catholicism when he created the Church of England. Turner himself was a Calvinist, which although an offshoot of Protestantism, didn’t sit comfortably with the crown. When Mary I came to power the country was thrust back into Catholicism and Turner’s beliefs and writings were little appreciated. He actually left the country under her reign. Turner’s books were banned twice, once under Henry VIII and again under Mary I. Though this would have affected his religious writings more than his botanical books there may have been a backlash which could account for their rarity today.

His ‘New Herball’ was published in three parts. A copy of part one, published in 1551 has recently been donated to the Natural History Society of Northumbria. It is a beautiful edition and in excellent condition. The ornate title page is decorated with woodcut illustrations and the elaborate gothic-style text on this page acts as an abstract of the book, stating that it aims to name herbs in Greek, Latin, English, Dutch and French and indicate their properties. 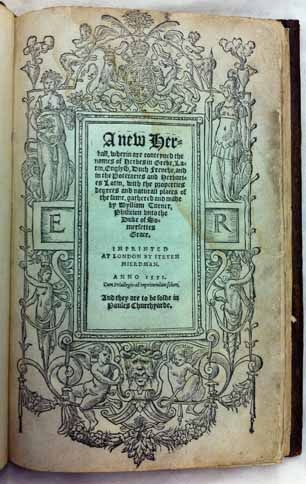 Part two was published in 1562, and part three, of which the Library also has a copy although it is not in as good a condition, was published in 1568. This third part contains the revised editions of part one and two and is dedicated to Queen Elizabeth I, whose long reign finally gave the country some religious stability.

As Turner explains on the title page of his 1551 herbal, it is a book that contains the names and descriptions of plants, often including their properties and medical virtues. At this time a ‘herb’ was considered to be any plant useful to man, so not just things that we now associate with cooking. There are a number of herbals in Europe that predate Turner’s. In fact many of the illustrations used in Turner’s ‘New Herball’, which would have been carved out of wood and used like stamps, were reused from an earlier book on the history of plants written in Latin by a Leonhart Fuchs in 1542. The reason that Turner’s herbal is considered to be so important is because it is the first to be written in English. This meant that anyone who could read English was able to learn information about herbs that had previously been passed on by word of mouth, or written in Latin. The 1568 book containing all three parts of ‘A New Herball’ recognises 238 different plant species, as well as giving their properties, uses and virtues. The fact that Turner not only systematically recorded, but opened up herb lore to a wider audience has led to him being referred to as the ‘Father of English Botany’. 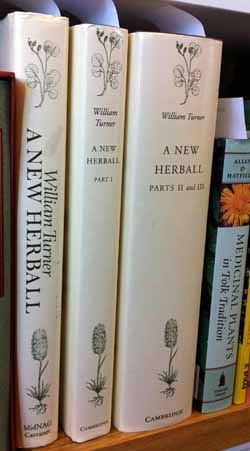 A facsimile edition of Turner’s original book has been published and is available for use in the Library. This edition is in two volumes and provides the reader with a modern transcript of the original text, together with notes, and a glossary of unfamiliar or obsolete terms. By making use of this Turner’s original work becomes more accessible and easier to use for the contemporary reader. 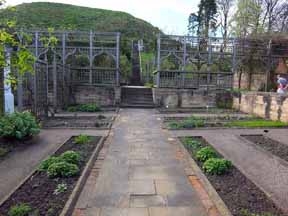 There are still echo’s of Turner remaining in Morpeth in the form of the ‘Turner Garden’ in Carlisle Park. Though currently slightly bare, the plant plaques have snippets from Turner’s Herball, indicating the uses of the plant.

Fancy having a look at Turner’s Work? Or even find out which herbs might cure your ailments? Visit the Great North Museum: Hancock Library. Further details are on the website www.greatnorthmuseum.org/library