I am a museum studies master’s student, volunteering at the Discovery Museum for my work based placement as part of my Semester three module, ‘Museum, professional practice and research’.  During my time here I have been accessioning objects and adding them onto the online collections. During this process, I came across a collection of birthday cards from 1942, sent to a woman named Gladys Harrison to celebrate her 21st birthday; these included postcards and three telegrams. 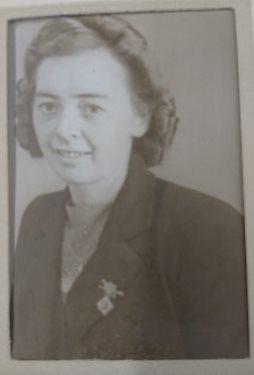 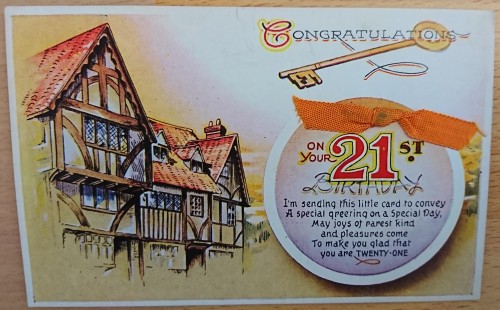 Gladys was born 15 March 1921 and died in 2016 at the age of 95. As the address on the telegrams and postcards suggest, she seems to have lived at Cullercoats at the time of her 21st birthday.

Whilst examining these, I happened to notice that many of them had a key adorning the cover. I thought this was interesting as I remember for my 21st birthday I received a key; rather than appearing on a birthday card it came in the form of plastic tat alongside a similarly tacky, plastic champagne flute. However, I’m sure the symbolism was well intended in its purchase and delivery, but I must admit that it was quite lost on me. I assume my mind was distracted by the thought of going out that night to celebrate. But now, three years later, the novelty of my 21st has worn off and I find myself referring back to this gift and comparing it to what I see displayed on these beautiful cards. The symbolism, I can assume in the images I see, whilst associated with special birthdays, also are related to wishing someone good luck and happiness, as can be translated by the horseshoes and messages of well-wishing strategically placed around the key. 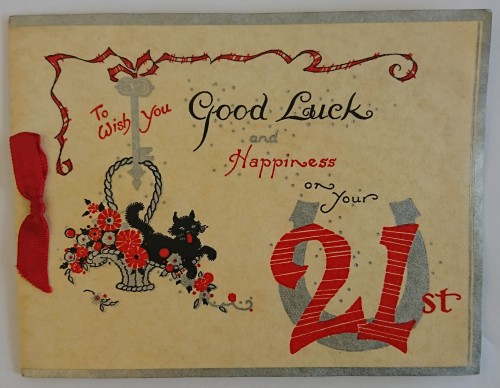 My particular favourite of Gladys’ 21st birthday cards is a white, red and silver card with a cheeky little cat jumping out of a flower basket. It is strange to see the message ‘To wish you good luck’ with a picture of a horseshoe, a symbol of luck, next to an image of a black cat, which are usually considered a symbol of bad luck. But the card is very sweet and clearly sent with the best of intentions.

After a bit of research on the subject I discovered that the ‘key’ was more than a symbol of good luck. The key is meant to represent a ‘key to the door’, what once would have been offered as a rite of passage, reaching the age of adulthood, the age of which it was appropriate for the recipient to freely come and go without parental consent. In this case, that age was 21, the age in which a person would be considered old enough to own their own key to their place of residence.

As my interest had been caught by the topic, I searched the museum’s collections for similar pieces and found more, all sent to celebrate a 21st birthday. One of the most interesting pieces I found on my search was a beautiful, large wooden key made at Swan Hunter & Wigham Richardson’s in Wallsend in 1953, for a co-worker’s 21st birthday. It was apparently tradition for the joiners there to make these keys for the 21st birthdays of the women employees; this particular key was made for a woman named Margaret Nicholson who was the company’s secretary. To celebrate her birthday, they had a tea party in the office and after work they went to the pub. Unfortunately, poor Margaret was refused entry as she was said to have looked under 21. There is a message on the front of the key, ‘‘Margaret’ and ‘June 30th 1953’’ and they have all signed the back, like they would inside a card. This is the only piece in the collections that I could find that replicates a birthday ‘key to the door’ in 3D form. Other examples of 21st birthday cards can be found in the collections such as these in the image below. 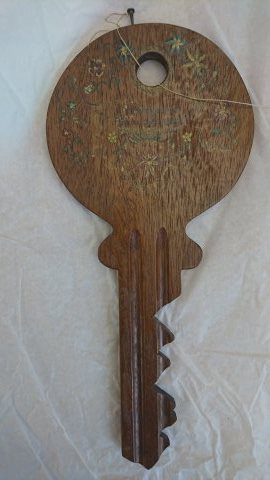 A large number of Gladys’ birthday cards display an image of a key. Despite my experience of the tradition, it seems to be a dying trend, as my visit to various card shops discovered. Although cards with a key present are available, their numbers seem to be dwindling, and although the odd shop may still sell keys to give as gifts, they seem to be a rare find. The buyer would probably have more luck buying online than finding them on the high street. 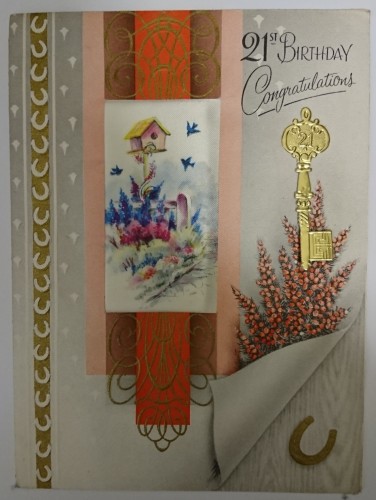 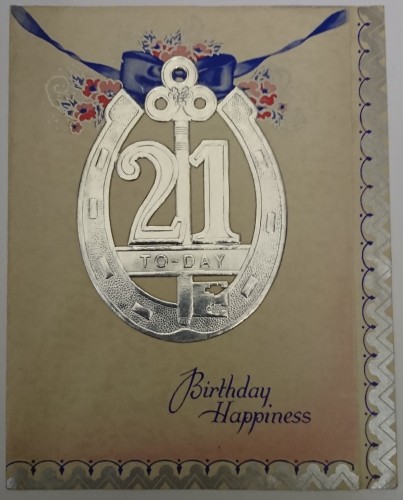 In honour of Gladys’ and Margaret’s 21st Birthday, although very belated, here is the chorus from a song written in 1912 by Alec Kendal called ‘I’m Twenty One Today’:

(For the full set of lyrics see: http://monologues.co.uk/musichall/Songs-I/Im-Twenty-One-Today.htm)