Half Hung or Half Baked? 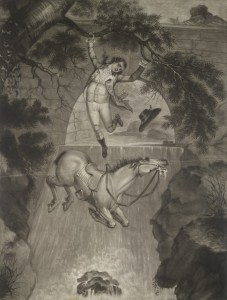 Amongst the many dark and mysterious secrets of Newcastle’s past, there is one that I have always found particularly fascinating; The Legend of ‘Half-Hung’ MacDonald. The short summary of the story is that Owen MacDonald was a soldier, executed on the Town Moor for a murder committed at a pub on Newcastle’s Bigg Market, in 1752. As part of his sentence he was to be dissected, after execution, by the Surgeons at Surgeons Hall  (a common practice after 1752, see previous blog for more info). So far, so normal! However, in an entry in Sykes Local Records from 1833 an interesting footnote appears when describing the sorry episode.

“It was said that after the body was taken to the Surgeons’ Hall, and placed ready for dissection, that the surgeons were called to attend a case at the Infirmary, who, on their return, found Macdonald so far recovered as to be sitting up; he immediately begged for mercy, but a young surgeon not wishing to be disappointed of the dissection, seized a wooden mall with which he deprived him of life. It was further reported, as the just vengeance of God, that this young man was soon after killed in the stable by his own horse. They used to shew (sic) a mall at the Surgeons’ Hall as the identical one used by the surgeon.”[1]

The story is indeed a remarkable one if it is true, but the origins were clearly shaky even at the time of Sykes’ recording of it, noting as he did, that

“I have thrown this note together from the report current some years ago, but which is now fast dying away.”[2]

Irrespective of the relative truth of the tale, from henceforth the legend was created and spread far and wide, the extent to which the story became a popularised ‘truth’ can be instanced in its appearance in a Californian newspaper, The Golden Era, in 1866, replete with numerous factual inaccuracies and literary flourishes, such as the date of the execution being listed as 1762, a decade after it happened![3] Indeed the legend still appears on many a modern article on death, resurrection or burial (should you be searching for these things on Google!) and is still one of the most titillating stories on the many ghost or murder walks and tours that take place in Newcastle. But was it true? I wanted to see if I could make any sense of the story by using the Tyne and Wear archives.

My first stop was the Barber Surgeons records, (or to give them their fantastic full title, the Newcastle upon Tyne Company of Barber Surgeons, Wax and Tallow Chandlers and Periwig Makers). There is no record of the incident recorded, indeed relatively few notes exist about dissections of the executed. Having said that, you would hardly expect them to have recorded an incident of malpractice like that. A newspaper report gives us a fuller insight.

“His body was carried to the Surgeons Hall, and there dissected and anatomized according to his sentence.”[4]

Two weeks later the same newspaper carried a detailed report of all the elements of the dissection (being as it was an event open to the public) and no mention is made of any foul play. So, perhaps the story ends there? Well, not satisfied I decided to use the newspapers to trace another part of Sykes’ initial entry. Namely, the mysterious death of the Surgeon who apparently killed MacDonald on the dissecting table.

A search of British Periodicals led to the following entry,

“The Surgeons who lectured on MacDonald’s body, after dissection, were Messrs. Hallewell, Stodart, Greenwell and Lambert. The Latter, we believe, was the father of the young gentleman who, seven years after the date of these transactions met with the extraordinary accident in Sandyford Lane (as recorded in the Monthly Chronicle for March 1887, which has ever since given to the scene of it the name of Lambert’s Leap.”[5]

Now, Lambert’s Leap, for those who don’t know (don’t worry, I didn’t – despite walking past it, unknowingly, hundreds of times) is still remembered via a coping stone in a wall behind a bus stop on Sandyford Lane. In the mid c18th it was the site of “narrow bridge that crossed the deep wooded Sandyford Dene, a tributary of the Ouse Burn further east.”[6] The stone was placed in the wall to commemorate another remarkable incident in 1759, reported at the time, in the Newcastle Courant.

“On Friday the last instant, as Mr Cuthbert Lambert (youngest Son of an eminent Physician of that Name in this Town) was riding along Sandifordstone-lane, his mare took Fright, and running to the Bridge, leap’d on the Battlement, three feet and a Half high, and from thence made a spring to one side of the Burn below, which measures 45 feet, and is 36 Feet perpendicular; what is most astonishing, and indeed remarkably providential, the young Gentleman kept close to his seat from the Top to the Bottom, and escaped with his life: He is now greatly recovered from the Hurt received by so violent a shock, and in a very promising way to do well. The mare died soon after.”[7] 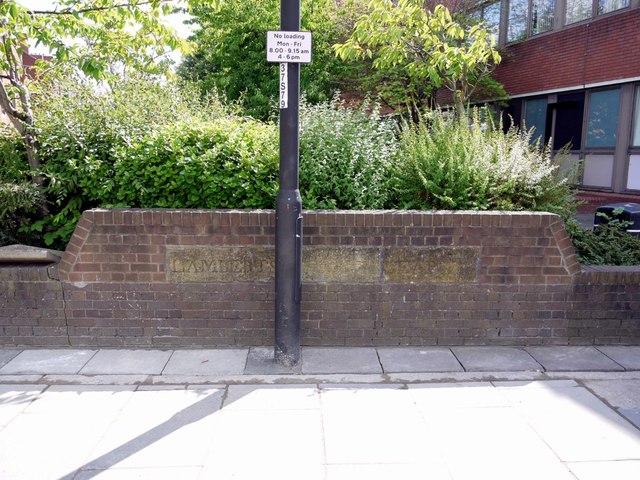 Later reports suggested that Lambert’s survival was even more providential, some claiming that he survived by hanging from the branches of an old ash tree. This story became the stuff of legend and was memorialised in an aquatint in 1786, held in the British Library. There was even a pub named after it just near the site, which has since shut down.

The most important two facts for my queries though, were that Cuthbert Lambert was a Customs Officer, not a Surgeon, and that he didn’t die in the accident, indeed he miraculously survived. So, he couldn’t have presided over a dissection and any idea that his death was some sort of karmic retribution can be dismissed by his remarkable recovery. One other possibility is a bizarre repeat of history almost 70 years after.

“About eleven o’clock on the forenoon, as Mr. John Nicholson, son of Mr. John Nicholson, of Newcastle, and pupil of Mr. Henzell, surgeon, was riding along Sandyford-lane, near Newcastle, his horse ran away, and in making the turn at Sandyford-bridge, the animal struck the battlement and fell, but it immediately rose and leaped from the bridge into the rocky channel below, being a depth of 36 feet perpendicular. The unfortunate young man was so dreadfully bruised and injured, that he lingered in an insensible state until seven o’clock in the evening, when he expired.”[8]

The similarities are remarkable, the report covering it said as much, stating that

“The only difference is, that Mr. Lambert survived and his horse was killed, but in this instance the horse was so little injured, that a person rode it into town for assistance.” [9]

However tragic, Nicholson could not be the surgeon in Sykes Records as he would not have been alive at the time of MacDonald’s dissection and, as our earlier sources show, his father and his Surgeon teacher, Mr Henzell, were not recorded as present either.

So, where does this leave “Half-Hung” MacDonald and the relative truth of Sykes’ “thrown together” note that was “fast fading away” at the time of writing. My estimation is that, like many popular tales or myths, it is the conglomeration of numerous incidents fuelled by the very real contemporary fear of Surgeons and the punishment of dissection. A punishment that historian Ruth Richardson famously said was often more greatly feared than execution itself. What shouldn’t be forgotten in any attempts to disprove this legend is that, however true, it would have been widely believed by the people of the day.

[1] John Sykes, Local Records; Or, Historical Register of Remarkable Events: Which Have Occurred in Northumberland and Durham, Newcastle upon Tyne, and Berwick upon Tweed, from the Earliest Period of Authentic Record, to the Present Time; with Biographical Notices of Deceased Persons of Talent, Eccentricity, and Longevity (J. Sykes, 1833), 202.

[2]  John Sykes, Local Records; Or, Historical Register of Remarkable Events: Which Have Occurred in Northumberland and Durham, Newcastle upon Tyne, and Berwick upon Tweed, from the Earliest Period of Authentic Record, to the Present Time; with Biographical Notices of Deceased Persons of Talent, Eccentricity, and Longevity (J. Sykes, 1833), 202.

[8] John Sykes and John Sykes (of Newcastle-upon-Tyne.), Local Records (Printed for and sold by J.Sykes, 1833), 211. https://play.google.com/books/reader?id=eqQDAAAAMAAJ&printsec=frontcover&output=reader&hl=en&pg=GBS.PA212