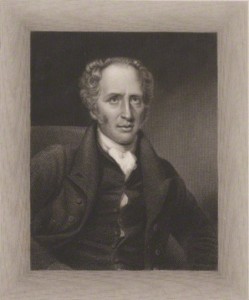 Whilst I was researching the picture of John Hodgson for the Wall Face exhibition (on display at Segedunum Roman Fort) I was interested to find out that the painter of the original portrait used as the base for the published engraving, one H. F. S. Mackreth, was a woman. The engraving was used as a frontispiece in Hodgson’s work ‘The History of Northumberland’ and the published letters in Hodgson’s biography include a number relating to the portrait and its engraving, although all the correspondence is with Harriet’s brother rather than with her directly.

Harriet Frances Sophia Mackreth was born in London in 1803, moved with her family to Newcastle in 1823, and died at York in 1887. She had already had some of her paintings exhibited at the Royal Academy in London by the time she painted the miniature of Hodgson in 1829, and at least 12 other portraits by her are known, including one of the architect John Dobson. The people she painted seem to have been mainly family friends or acquaintances, and after the family moved away from Newcastle her portrait painting petered out.

Hodgson’s friend Edward Swinburne saw the portrait at the time the engraving was being made, although statements he made in a letter to Hodgson suggest he did not think too highly of it. He also remarked that: ‘There is an expression of sensualism in the lips which yours have not a bit of’. In a letter to Harriet’s brother Hodgson commented on Swinburne’s opinion, saying: ‘I am no physiognomist, and therefore do not know what that expression is, but if Miss Mackreth can discover it, and rectify what seemed to offend my kind and excellent friend, I will feel obliged to her’. Hodgson himself thought ‘there is perhaps more of frown than of contemplation or thought in the contraction of the muscle over the right eyebrow’ in the final engraving.

I agree about the frown!