The First World War accelerated technological innovation. Many of the devices developed were used to generate or listen to sound for communication purposes. From radio broadcasts to early underwater microphones, listening was a key strategy in the war effort. Many accounts of the war recollect sound as a major sensory experience yet, as far as we’re aware, no sound recordings of battle actually exist. There is an interesting space here for creatively imagining what these technologies might have sounded like.

The Transmit / Receive project explores these sonic communication technologies using contemporary knowledge and materials. The idea of the project is to engage with some of the themes, sounds and technological advancements of the period through a practical programme of work including two workshops and some informal performance events.

In collaboration with Ben Freeth, Tom Schofield and John Bowers, I planned some public workshops which would engage participants in the building of a variety of World War One technologies. The activities, which took place in the basement of Discovery museum, involved DIY electronics, making and lots of curious sound generation.

Over the two workshops we built a range of devices including hydrophones (underwater microphones), Morse code synthesisers, Carbon Granule Microphones and (very!) short range AM radios. 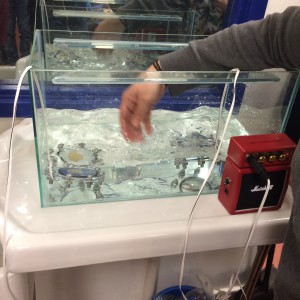 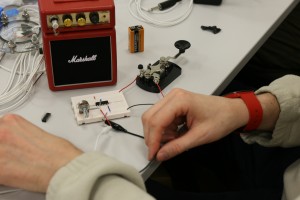 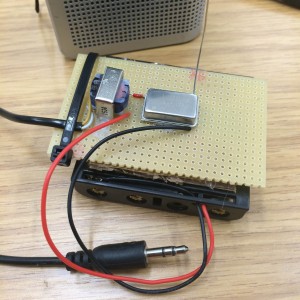 The short range radio transmitter consisted of only two components, available from most hardware stores. This small device allowed participants to broadcast any sound to battery powered radios placed around the space. 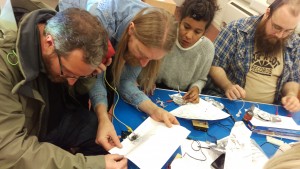 We were lucky enough to have a great group of open-minded people who immediately got stuck in with the making and experimented with the devices we made. After building we explored performing with devices. In the following video we have a Morse code synthesiser playing through a hydrophone into a tank full of water. This is then being picked up by another hydrophone in the tank and amplified through a mini amp.

This weekend we are going to Tynemouth and the Fulwell Acoustic Mirror to explore these technologies in WW1 relevant sites which will include broadcasting Morse code into the North Sea! Feel free to join us in person or listen in online from our Internet broadcast.