Great North Museum: Hancock Library – The journals of the Society of Antiquaries of Newcastle upon Tyne

Since I retired from my library job last summer, I have been doing voluntary work one day a week in the Library of the Great North Museum: Hancock. 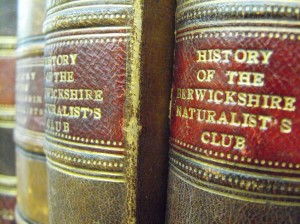 History of the Berwickshire Naturalists' Club from the Society of Antiquaries' Library. Photo by Nicky Clarke.

Over the last few months I have been involved in checking the holdings of the journals in the Society of Antiquaries Library, which has been absorbing and challenging work. The Society has been collecting journals in the fields of history and archaeology, by purchase or exchange, from its earliest days, and the breadth and depth of the resulting collection is awesome. I have worked with local history collections before, so the volumes from British antiquarian societies were not unfamiliar except in their geographical and chronological comprehensiveness. Many of the British periodicals have continued in an unbroken sequence from the early 19th century to the present day. The prize for the most venerable goes to the History of Berwickshire Naturalists Club, founded in 1831 and still going strong under its 19th century name; although the Numismatic Chronicle (founded 1836) can boast the most volumes: 169 to date. 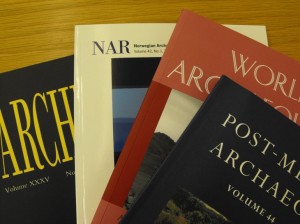 A selection of journals from the Society of Antiquaries' Library. Photo by Nicky Clarke.

But the Society’s scope covers all of Europe, and it has been a revelation to me to find how much work has been carried out and published in almost every corner and language of the continent. There are 30 publications from Germany alone, both national and local.

There are three separate serial publications emanating from the Société d’Émulation d’Abbeville, the earliest starting in 1844; the Sociétés d’Émulation in France were the local antiquarian societies, so called to distinguish them from the national aspirations of the Academies. Abbeville, near the mouth of the Somme, was the source of the first stone tools of early man to be identified as such, by the pioneer archaeologist Jacques Boucher de Perthes; and the journals in the Society’s collection include the earliest publication of most of the significant archaeological discoveries throughout Europe. 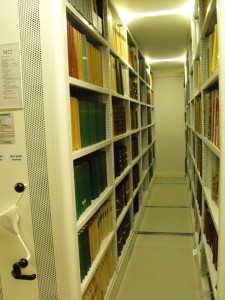 Back runs of journals in the library mobile shelving. Photo by Nicky Clarke.

With Italian, Spanish, Portuguese, Hungarian, Dutch and all the Scandinavian languages represented – as well as Latin – identifying the holdings of these journals has been a challenge to our linguistic skills. But solving the puzzles presented is correspondingly rewarding.

The records we have assembled will shortly be added to Newcastle University’s online catalogue, so that these matchless historical and linguistic treasures can be made better known and more available. It has been a privilege to be involved in this stimulating enterprise.

Many thanks to Joan and all the library volunteers who were involved in this task. As Joan mentions, records for the Society of Antiquaries’ journals will soon appear on Newcastle University Library’s online catalogue and all the journals are available to look at in the Great North Museum: Hancock library. Nicky. 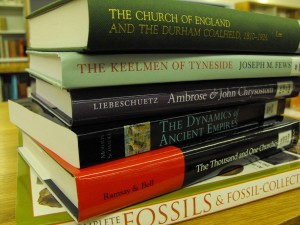 Some of the new books in the library - June 2011. Photo by Nicky Clarke.

The dynamics of ancient empires : state power from Assyria to Byzantium / edited by Ian Morris and Walter Scheidel, 2009.

The keelmen of Tyneside: labour organisation and conflict in the North-East coal industry, 1600-1830 / Joseph M. Fewster, 2011.

The complete guide to fossils and fossil-collecting / Steve Parker, 2009.

2 Responses to Great North Museum: Hancock Library – The journals of the Society of Antiquaries of Newcastle upon Tyne