My name is Erin Slack and I am the curatorial assistant for natural sciences at the Great North Museum: Hancock. In this blog post I want to talk about something very important to me and the work I do: Pokémon. 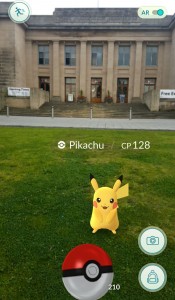 It might sound a bit strange for someone who works closely with animals and the natural world in a museum setting to be espousing the virtues of a video game, however the origins for the Pokémon franchise and the Great North Museum: Hancock are actually closer than you might think.

Games developer Satoshi Tajiri found inspiration for the Pokémon series in his childhood interest of collecting insects. Nicknamed ‘Dr. Bug’ as a youngster, Tajiri dreamed of becoming an entomologist and spent a lot of time catching beetles, crayfish and other invertebrates in the woods near his home of Machida, Tokyo.

For Tajiri, growing up in Japan, it was common for children to go out and collect insects, luring them in by placing honey onto the bark of trees. As he grew, he saw housing, factories, arcades and building developments take over the spaces where insects lived and a decline in the populations of different species. In an interview with TIME in 1999, Tajiri said:

“Places to catch insects are rare because of urbanisation. Kids play inside their homes now, and a lot had forgotten about catching insects. So had I. When I was making games, something clicked and I decided to make a game with that concept.” 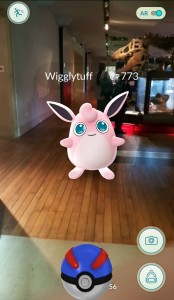 Wigglytuff spotted near to our replica T.rex in the museum. © 2016 Pokémon/Nintendo.

From these origins the concept developed into a fully-fledged universe filled with hundreds of Pokémon – many of them taking the form of insects as well as mammalian, reptile, amphibian, bird, fish and even humanoid shaped creatures with fantastic powers. Some Pokémon are based on mythological animals and themes taken from Japanese folklore too.

Many Pokémon also share interesting biological features with real animals, such as: diurnal (day-time) and nocturnal (night-time) feeding patterns; sexual dimorphism (size difference etc. between sexes); and symbiosis (mutually beneficial relationships between organisms). The Pokémon Eevee also demonstrates something quite similar to polyphenism – this is where differences in environment, hormones, genetics or diet can trigger the development of different physical and behavioural characteristics across the same species.

Evolution is also a key feature of the Pokémon games but this is not the same as biological evolution. When a Pokémon evolves it goes through a process more closely resembling metamorphosis or biological development; the original Japanese word 進化 (shinka) can mean both ‘evolve’ and ‘progress’ and this may be where some of the confusion lies. Annoyingly, ‘evolve’ is also a lot snappier than ‘metamorphose’. 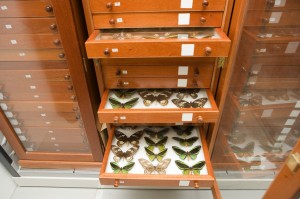 Butterfly mounts in the Great North Museum: Hancock stores. These specimens were collected by enthusiasts over many years.

One of the strangest parallels with nature comes from a Pokémon called Parasect – as this Pokémon grows (and evolves from Paras) the parasitic fungus on its back slowly consumes Parasect, taking control of the host’s body and mind. This is similar to the relationship between Ophiocordyceps unilateralis (A.K.A. ‘zombie fungus’) and certain species of carpenter ant.

For me, growing up, I was totally immersed in the Pokémon phenomenon – the games, the anime and trading cards – and in a lot of ways I still am. I now work daily with a vast collection of natural science specimens; cases of butterflies and eggs, jars of sea creatures and thousands of preserved birds. Some of these are extremely rare, endangered, and even extinct and all of these animals have their own interesting natures and life cycles worthy of study.

I think the fascination Satoshi Tajiri and the founders of the Great North Museum: Hancock felt towards collecting and studying the natural world is one and the same. The collections of the Natural History Society of Northumbria contain over half a million specimens including a large selection of entomology, molluscs, crustaceans, plants, birds and other animals from around the world. This collection was painstakingly gathered by intrepid enthusiasts, researchers and conservationists for whom “Gotta catch ’em all” might as well have been a mantra.

To go out, record and document the natural living world is an important undertaking for us all; it gives us a better idea of how life developed over time, an understanding of the planet’s diverse ecosystems and how we can care for them. 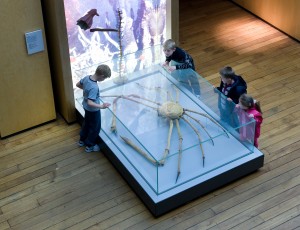 A Japanese Spider Crab at the Great North Museum: Hancock. An inspiration (along with the Fiddler Crab) for the Pokémon Kingler, perhaps?

If, like me, you are out and about in all kinds of strange places catching Pokémon this summer, look out for some of the bugs and creatures around you. Whether you’re in your garden, a park, the beach or even in front of the Great North Museum: Hancock you might just see something new or interesting. If you are in the North East you could also log your wildlife sightings with ERIC North East; this helps provide data for conservation scientists and research teams – arguably the ‘real’ Pokémon professors.

2 Responses to Gotta Catch ‘Em All: The Naturalist’s Mantra