The previous instalment of this blog reflected on the diary entries of John Hall during his voyage from Sunderland to Seville onboard the sailing ship ‘Success’. John Hall lived at 62 Lawrence Street in Hendon, Sunderland, located near to the harbour and docks. He was onboard to look after the business interests of his father, George Hall, who was the ship’s owner. 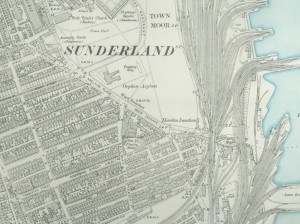 The outward journey to Seville passed quite peacefully but as the vessel got ready to return to the North East there were already warning signs of the trouble ahead. The ship’s Captain, Thomas Holburn, like many sailors before and since, had enjoyed a few drinks on shore. Unfortunately, the drinking didn’t stop as the ‘Success’ headed for home.

On 19 July a local river pilot boarded the vessel as she left Seville. When John Hall arrived on deck after breakfast the vessel had stopped for no obvious reason. As he discovered:

“… the Captn & Pilot had gone on shore in the boat & came off again in about 2 hours both drunk. They gave orders to get the ship underweigh (sic) & presently had her on the ground. Then the two drunkards commenced to quarrel & the Spaniard drew his Stilleto or Knife & made an attempt to stab the Captn but did not succeed. This is one of the million evils of drink. One moment they are great friends & the next sworn foes. Things are all going adverse on board – the crew swearing & not disposed to obey the orders of the two drunken fools who stand at the head of affairs on board the Pilot and the Captain”. 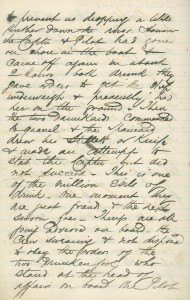 The journey home was proving to be slow and tortuous and the Captain’s mood didn’t improve as the days dragged on. Our author notes on 27 July that he was woken by the Captain quarrelling with the mate. Hall put this down to the Captain’s troubled mind.

“Constantly drunk at Seville, robbed on all hands, losing his purse tobacco pouch & their contents whilst in bad company, having spent the greater part of his earnings. Now that he can quietly think over his past conduct he grows wild with passion, upbraided by conscience he must give vent to his feelings … He seeks to drown his troubles in sleep but sleep will not visit his uneasy mind, altho he is in bed about 18 hours out of the 24. I am long since sick of this voyage & wish we were once more back to England”. 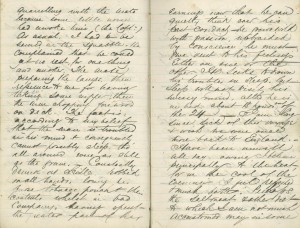 Unfavourable weather meant progress on the return journey was much slower than hoped. However, John Hall believed that Capain Holburn was using delaying tactics.

“It appears to me that so long as he can get anything to eat & the weather is fine so that he is comfortable he is not at all anxious about the wind – for to repeat the old saying ‘more days more dollars’ seems to be his only care or anxiety. It is evidently an attempt to make the passage as long as possible” (11 August). 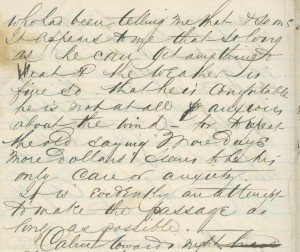 One consequence of the slow progress was that food started to run out on the ‘Success’. The diary entry for 18 August notes:

“Not a particle of Beef to be seen today. Everything goes hard with us. Living on bread & the suction of our thumbs. Some of us must die of starvation soon unless we get a fair wind & whose (sic) to blame then”.

Two days later hunger was setting in and perhaps seeking divine intervention Hall writes “Oh Lord how long are we to be without something to eat?” Captain Holburn’s lack of urgency in dealing with the food shortage led the author to worry about a possible mutiny.

“Fair wind today & not at the English Land for we are steering a Mid Channel course & no intention of getting anything to eat for the Crew. I am afraid of a rising amongst the Crew” (24 August). 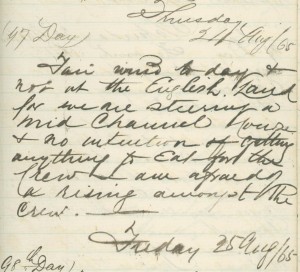 Finally on 26 August Hall went on shore at Weymouth and got some provisions. While his hunger was soon gone, his feelings towards Captain Holburn only deepened. Writing on 1 September he notes:

“Hundreds of ships passing us bound to and from London whilst we laid at anchor not at all inclined to get any further ahead. How I detest this man whom people call the Captain!!!”.

When the ‘Success’ reached Hull on 5 September John Hall telegraphed his father in Sunderland who caught a train and arrived the next day. They searched for the Captain but couldn’t track him down. The following day Captain Holburn finally appeared, apparently drunk, and in Hall’s words “… accused me of everything bad. Father he blackguarded shamefully & we were obliged to get a policeman to drag him on shore without hat or coat” (7 September).

By the following morning tempers had calmed and John Hall writes:

“We had the master on board this morning in company with his wife. He was then sober and quite a changed man – begged pardon for his Conduct and treatment & asked forgiveness for the injury he had tried to do to me & others. Asked me to make out his account & having done so paid him up to the 6th & let him go” (8 September). 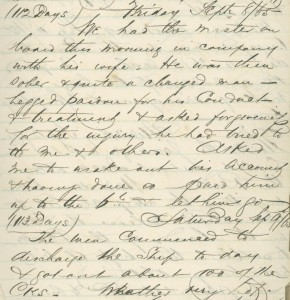 Hall’s diary is a fascinating slice of Sunderland’s maritime history. It would be easy to take it all at face value but it needs to be remembered that our author was an inexperienced seafarer and his interpretation of Captain Holburn’s behaviour may have been clouded by personal dislike.

To find out more about Captain Holburn I checked our microfiche copy of Lloyd’s Captains Register for 1869. This records that he was a Sunderland man, born in 1810. It also shows that his previous ship ‘Beaver’ was lost at sea in September 1864. This may have played some part in his caution on the return journey. It would be interesting to find out more about the loss of the ‘Beaver’ and if anyone has any details I’d be grateful to receive them. Interestingly, Lloyd’s Captains Register doesn’t record any subsequent vessels under Holburn’s command. I can’t help thinking that events on the ‘Success’ may have damaged his reputation.

The diary and thousands of other remarkable documents can be enjoyed by visiting Tyne & Wear Archives. You can see the full range of our collections by visiting our searchroom. We’re also adding new material all the time to our exiting sets on Flickr Commons.