Recent blogs have highlighted some of the fascinating diaries that Tyne & Wear Archives holds. Ian Whitehead’s blog about First World War Patrol boats makes excellent use of the diary of William Bartram written in 1916, while an earlier one by yours truly explored the diaries of Karl Otto Keller, who is credited with the development of the Doxford Opposed Piston Oil Engine.

I’m delighted to be able to report the addition of another diary to the Archives collections. The new arrival is an account of a voyage in 1865 on the merchant ship ‘Success’, written during its passage from Sunderland to Seville and back to Hull (TWAM ref. DX1527/1). The diary doesn’t tell us much about the ‘Success’ but an entry for 9 August 1859 in the Customs and Excise register for Sunderland (TWAM ref. EX.SU/1/36) records that she was a two-masted sailing ship of 149 tons, built in 1858 at St Martins, New Brunswick in Canada. 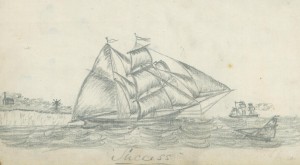 The diary’s author was a John Hall of 62 Lawrence Street, Sunderland, son of the ship’s owner, George Hall. John Hall was onboard to take care of his father’s business interests and his entries suggest that he was pretty inexperienced. Within a day of departure he admits that he was “Weary already with the monotony of a life at Sea” (21 May). Hall’s pain, however, is our gain since with little else to do he had plenty of time to write his diary. The daily entries are all the more interesting because the author is open with his thoughts and feelings.

John Hall’s motives for coming to sea are hinted at in his entry for 2 June, writing “… generally felt a landsman at sea … and this is called coming to Sea ‘for Pleasure’ or for ones Health”.  The situation had not improved by 6 June when he complains “… the time is wearisome and it is with difficulty I find anything to occupy my mind”. By mid June, though, he’d settled down and was feeling the benefits of his voyage.

“The air however feels so soft & mild & it seems to do me good. I am constantly in a gentle perspiration which seems to relieve me of those distressing pains which in cold weather affect me so much” (13 June). 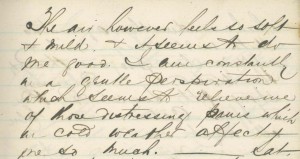 At about this time Hall’s diary starts to focus a bit more on the ship’s Captain, Thomas Holburn. His entry for 10 June notes “at night the wind increased & Captn orders the men to shorten sail. He seems timid & dare not ‘carry on’ as some do”.  Within a week it becomes clear that relations between the Captain and his crew were very difficult. Hall writes of the Captain “I knew how he was disliked by every man on board & his disagreeable manner towards everyone has rendered him almost detestable” (16 June).

Hall’s diary regularly records the ship’s progress and as it passed along the southern coast of Portugal he mentions a strange story he heard.

“In the afternoon we rounded Cape San Vincent, a high rugged rock on which stands the Lighthouse & a nunnery about which some strange stories are told about the Priests and the nuns for this Cape is near the Sea & the water very deep & as the Nunnery is on the extreme edge of the cliff there is the greatest facility for disposing of any body that was unwelcome. Hence the Fishermen of Lisbon etc are reported to have seen or even picked up the bodies of several new born infants undoubtedly thrown over the Cliff by the Priests or their attendants, these Infants having been brought into the world through the Combined agency of Priests & Nuns …” (20 June). 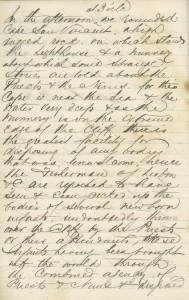 The diary is very much a personal account and inevitably reflects the prejudices of its author. This story should perhaps be taken (like the meat onboard) with a large pinch of salt.

On 26 June the ‘Success’ reached Seville.  Our author’s initial impression was that “Seville seems to be a dusty dirty place” (27 June) but after exploring the city he viewed it more favourably, describing the Cathedral as “a superb building” (29 June).

During the first half of July the ship’s cargo of ground flint was unloaded and replaced with a consignment of 80 tons of lead and 10 tons of olive oil. While on shore some of the crew took the opportunity to let their hair down and our author reports with dismay

“The Captn has been on shore all day spending his time in drinking and dissipation as is evident from the fact of his bloated countenance & unsteady gait … Such alas is the manner in which hundreds of Englishmen spend the Sabbath in a foreign country” (16 July). 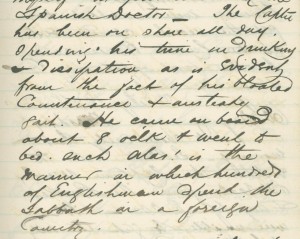 Nearly 150 years on and the same complaint could just as easily apply today. Captain Holburn’s behaviour was to be a warning of troubles ahead. On 19 July the ‘Success’ left Seville. The journey to Spain had been plain sailing, but the return to England was to prove anything but.

One Response to From Sunderland to Seville: Diary of life at sea in 1865 (part 1)