From Hornel to Peploe: Early Modern Scottish Art in the Laing Art Gallery 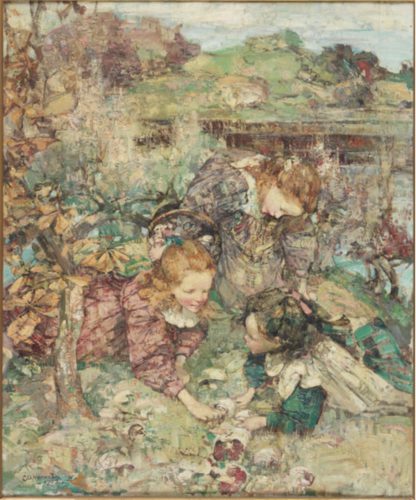 Edward Atkinson Hornel (1864-1933) was one of the celebrated ‘Glasgow Boys’ who were at the forefront of the Scottish art world of the late nineteenth-century. He was born in Bacchus Marsh, Australia but grew up in Kirkcudbright in Dumfries and Galloway. He trained at the Trustees’ Academy in Edinburgh and at the Royal Academy of Fine Arts in Antwerp. On his return to Scotland in 1885, Hornel became friends with George Henry (1858-1943) with whom he travelled in Japan from 1893 to 1894; the trip was to have a profound impact on both artists’ work. In 1901 Hornel declined election to the Royal Scottish Academy and purchased Broughton House in Kirkcudbright, which became his home, studio and gallery for the rest of his life.

The Little Mushroom Gatherers of 1902 is a fine example of the paintings which Hornel made after the flush of radicalism demonstrated at the start of his career. His sister Elizabeth, with whom Hornel lived, arranged for local children to sit for him. He would devise various activities for them to recreate, in this instance gathering mushrooms, but in others picking flowers, chasing butterflies and playing with balloons, for example. Hornel would set these scenes in local woods and beaches, with an emphasis on childhood innocence, idyllic weather and beautiful natural surroundings. In The Little Mushroom Gatherers three girls are carefully rendered absorbed in their task. The colours of their clothing blend with those of their environment, seen in detail in the tree at the lower left and more freely represented in the background hills. Areas of representation and abstraction play with notions of pattern, surface, depth and volume, recalling lessons learnt from Japanese art and combining innovation with tradition. The painting was purchased for the collection in 1915. 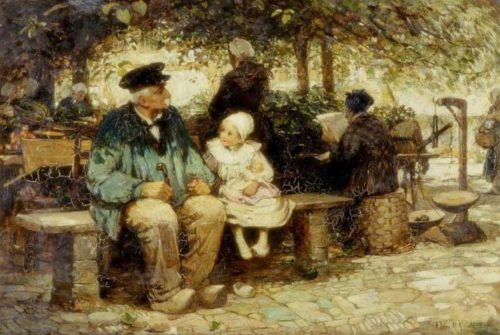 Flora Macdonald Reid (1861-1938) was born in London to Scottish parents. She studied at Edinburgh School of Art and received tuition from her brother, the better-known John Robertson Reid (1851-1926). Reid exhibited for the first time at the age of sixteen, when her work included in the Royal Scottish Academy Annual Exhibition of 1877. On returning to London in 1881, Reid regularly participated in group exhibitions there and in Edinburgh, Glasgow and Paris. She travelled in France, Belgium and Norway and developed an assured Naturalism with parallels to the work of artists including Jules Bastien-Lepage (1884-84) and George Clausen (1852-1944). Her first work to be acquired for a public collection was purchased by Dudley Art Gallery in 1894.

An interest in capturing moments of daily life developed into depicting narrative scenes, as in Comrades of 1905. Reid painted it whilst living in Polperro, during ten years spent in Cornwall. Its impressive scale – the canvas measures 62.3 by 92.5cm – belies the intimacy of its subject matter, the bond between an elderly man and a young girl. They are seen holding hands on a bench beside an outdoor market and their clogs suggest a scene observed in Belgium. The child nestles a doll in her lap and looks at her companion. Rather than returning her gaze, he looks into the distance, apparently lost in thought. Behind them a sun-dappled market is laid out beneath a canopy of trees, providing glimpses of stall holders and customers.

Comrades was shown at the Royal Academy Summer Exhibition of 1905 and in the International Exhibition in Rome of 1911. Comrades was presented to the collection in 1934 by local businessman George E. Henderson (1844-1937), who bequeathed the remainder of his collection to the Laing following his death five years later. Although traditional in subject matter and technique, Comrades is by a successful Scottish artist of international standing, who was a pioneering woman in her profession.

Francis Henry Newbery (1855-1946) did much to advance the cause of women artists in Scotland, especially whilst Director of Glasgow School of Art between 1885 and 1917. Born in London, Newbery trained at Bridport School of Art in Dorset and the National Art Training School in the English capital. Following his appointment to the Glasgow post, he turned the institution into the most advanced of its kind in Britain, not least for the employment and enrolment of female staff and students. Newbery married the artist and designer Jessie Wylie Rowat (1864-1948) in 1889, a Glasgow School of Art pupil and teacher.

Rowat is believed to have designed the dress worn by the sitter in The Lady of the Carnation in about 1912. It was painted the year after Newbery’s retirement in 1918 and following the couple’s move to Corfe Castle in Devon. The unusually elongated format of the canvas emphasises the silhouette of the model, allowing her high-waisted, full-length outfit to be seen to its best effect. She leans against a mantelpiece which reaches up chin-height, on which she holds the pink carnation of the title. Silver candelabra flank her, whilst a marble or plaster relief provides contrast to her brown hair. The focal point of the painting is the model’s face and bare skin, made visible by the lace-lined v-neck of her dress. The material is thought to be lightweight silk-cut velvet, of black on a jade-green ground. Apart from highlights in the sitter’s lips and the flower’s petals, the palette is low-toned and the lighting subtle, in an image which celebrates universal female beauty as well as the achievements of the artist’s wife. The Lady of the Carnation was purchased for the collection from Newbery shortly after its completion. 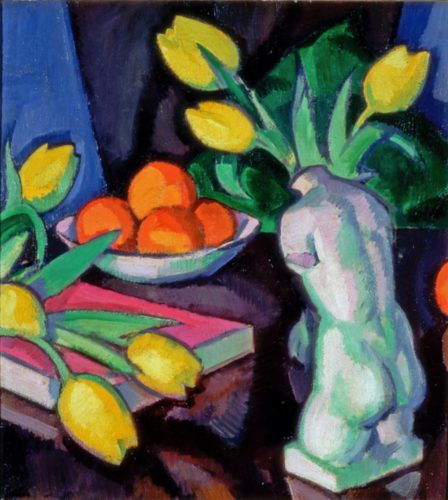 Samuel John Peploe (1871-1935) is one of the four artists known as the Scottish Colourists, along with F. C. B. Cadell (1883-1937), G. L. Hunter (1877-1931) and J. D. Fergusson (1874-1961). He was born in Edinburgh and studied periodically at the Académie Julian in Paris and at the Royal Scottish Academy Life School in the Scottish capital. He lived in Paris between 1910 and 1912, where he was able to see the latest developments in French painting at first hand and was elected a member of the avant-garde exhibiting society, the Salon d’Automne. On returning to Edinburgh in 1912, his new work was received with scorn but after World War One he established a successful career, based on regular solo exhibitions in Scotland and England. Peploe was elected a member of the Royal Scottish Academy in 1927, the year in which the Tate acquired one of his paintings; international exhibitions included those in Venice, Paris and New York between 1909 and1931. A brief period teaching at Edinburgh College of Art ended due to the ill-health which resulted in his death in 1935.

Peploe is most celebrated for his still-life paintings, a genre in which he said he could ‘never see mystery coming to an end.’ His post-war reputation was founded on an extraordinary series featuring tulips, then roses, which he painted in his studio at 54 Shandwich Place in Edinburgh’s West End. Yellow Tulips and Statuette of the early 1920s is a fine example of the way in which Peploe carefully orchestrated a cast of objects including flowers, fruit, ceramics and objects d’art. Characteristic close cropping means that yellow tulips spill into the left-hand side, whilst a barely glimpsed orange is just visible on the far right. The statuette of the title is fully realised, but has to share attention amidst the evenly painted, often outlined in black forms by which it is surrounded. Two and three dimensions flow throughout the composition which contrasts blocks of high colour with swathes of black and dark blue, in a spatially ambiguous setting. Tulips and Statuette is an assured, accomplished painting, which illustrates the progress of modern Scottish art during the interwar period. It was purchased for the collection in 1948.

Alice Strang is an award-winning art historian and curator of Modern and Contemporary Art. Website https://alicestrang.co.uk/