A guest post by Marleen Vincenten, Assistant Keeper on the Wor Life 1914-1918 project.

In May 1916, Muirhead Bone was appointed as the first official British War Artist. Some of his work, together with that of fellow war artists like Paul Nash, Christopher Nevinson and Wyndham Lewis, was on show at the Hatton Gallery as part of Screaming Steel: War, Art and Trauma. These artists had made a name for themselves in the art world before the war started, and were acknowledged by the art establishment. 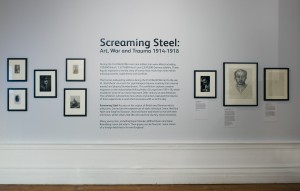 Portraits of various war artists and poets in Screaming Steel: War, Art and Trauma. This exhibition took place at the Hatton from September till December 2014. Photo: Colin Davison.

One of the official war artists whose work wasn’t considered of high artistic merit, was the Italian-born Fortunino Matania (1881-1963). The Imperial War Museum at the time rejected one of his works, while critics saw him as a ‘mere illustrator’. In terms of the general public however, he enjoyed great success and he had a massive influence on his contemporaries’ perception of the war. His hundreds of illustrations of the war effort that appeared in The Sphere magazine had a far reach, both in Britain and abroad. He portrayed life at the front as well as what happened at home.

An example of the popularity of his work can be found in When the Lamps Went Out, the First World War exhibition at the Discovery Museum. This handkerchief was designed by Matania to raise funds for Italian Day. On this day, 7 October 1915, Italian companies in London sought to demonstrate their commitment to the Allied cause. The handkerchief shows an Italian and British soldier with the figure of Victory behind them. 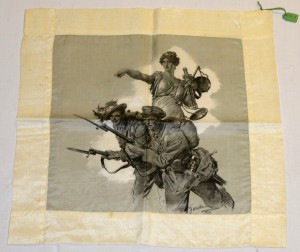 Handkerchief designed by Fortunino Matania, part of the collection of the Discovery Museum

The image previously appeared on the cover of The Sphere on 28 August 1915, with the following explanation: “This beautiful drawing has been presented by Signor Fortunino Matania to his compatriots of the Italian organisations in London who have arranged for an Italian celebration on ‘Italian Day’, October 7th, when it is intended that the above design shall be disposed of in the streets in the form of a souvenir pocket handkerchief. The sole copyright of the drawing has been vested by Signor Matania in the hands of the Italian Red Cross Society’. 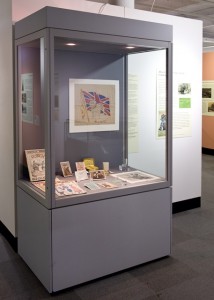 The object on display in When the Lamps Went Out: Life on Tyneside in the First World War. Photo: Colin Davison