In my last blog update I started looking at the three different collections housed in the library at the Great North Museum: Hancock. This month I’m going to tell you about the library of the Society of Antiquaries of Newcastle upon Tyne. 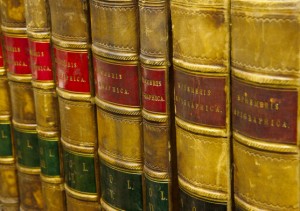 The Society of Antiquaries was founded in 1813 by members of the Literary and Philosophical Society who had a particular interest in archaeology and history, and since its formation the library has been at the heart of the Society. The library was originally set up through donations of manuscripts and books and was first housed in the Castle Keep. After a couple more relocations it was finally moved to the Black Gate in 1911, where it stayed until its move to the Great North Museum: Hancock in 2009. 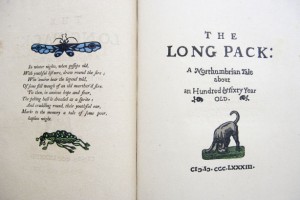 The focus of the Society’s library is on local history, architecture and archaeology. There is a section on Roman Britain which contains a wide range of publications on the Roman frontier in the North East and in particular a number of books about Hadrian’s Wall. Books on the history of Newcastle and Northumberland contain a wealth of local information, and local directories and poll books provide a fascinating source of primary evidence. There is a large section on coins and this includes books on Greek and Roman coinage as well as mints and seals.

The library contains many books published before 1850. Of particular interest are many locally published books, for example Henry Bourne’s History of Newcastle upon Tyne, printed in Newcastle in 1736.

As well as books the library also contains over 1500 tracts (pamphlets) and over 200 journal titles. Both the tracts and journals are a treasure trove of historical and archaeological information, the tracts in particular contain material of real local interest.

The library also holds complete sets of the Society’s own publications: the Proceedings and Archaeologia Aeliana, which contain articles covering all aspects of the history of the North East, from prehistory to the present. 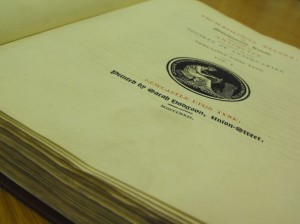 Everyone is welcome to look at the Society’s books and journals, for library opening times please visit the Museum’s website. or phone (0191) 222 3555 for more details.

If you want to find out more about the Society of Antiquaries of Newcastle upon Tyne take a look at their website.

Some new books in the Society of Antiquaries collection

Northern rock : the use of Egglestone marble for monuments in medieval England / Sally Badham, Geoff Blacker, 2009.

John Bewick : engraver on wood, 1760-1795 : an appreciation of his life together with an annotated catalogue of his illustrations and designs / by Nigel Tattersfield, 2001.