Elizabeth Garnett  – a Volunteer in the Great North Museum: Hancock Library has been investigating the fascinating link between the Natural History Society of Northumbria and a key figure in the First World War, Viscount Grey.

“The lamps are going out over all of Europe. We shall not see them lit again in our lifetime”

This famous quote has recently been the inspiration behind a ‘Lights Out’ ceremony, where all lights except one were extinguished in homes and buildings across the United Kingdom to commemorate the British entrance into the First World War.

This quote has greater links to the North East, and the Natural History Society of Northumbria than most people realise. It was made during a speech by Sir Edward Grey, who was the British Foreign Secretary from 1905-1916. In 1916 he received the title Viscount Grey of Fallodon. He is a relation of Charles Grey, the 2nd Earl Grey, most commonly recognised in Newcastle by ‘Grey’s Monument’ that is located in the city centre. 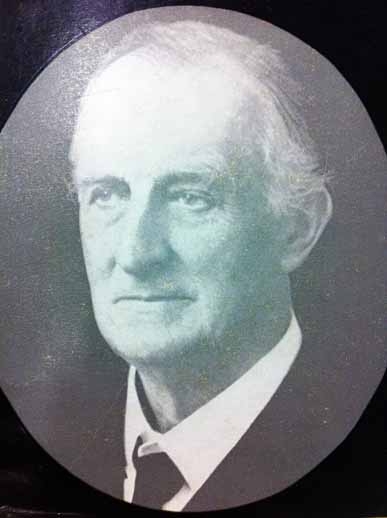 The quote was taken from a speech he made regarding Britain’s entry into the First World War and highlights his eloquence.  He also has the distinction of holding the position of Foreign Secretary for its longest tenure, a testament to his abilities.  However it has to be taken into account that he was a Foreign Secretary who spoke no foreign languages and disliked ‘Abroad’ – factors unimaginable in modern society.

He was, however, a keen ornithologist and was the President of the Natural History Society of Northumbria for nine years. Published in 1927, his book entitled ‘The Charm of Birds’ is an observational piece of writing where he records the birds on his Northumbrian estate. There is a copy of this book in the NHSN collection that is located in the Great North Museum: Hancock Library. 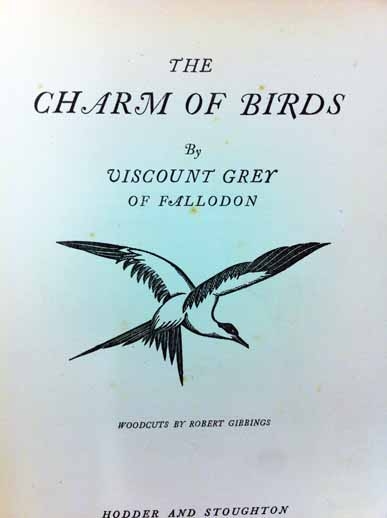 Also available is a signed copy of his book the ‘Fallodon Papers’ (1926). In his spidery handwriting the Viscount Grey of Fallodon himself, donates the book to the Natural History Society of Northumbria. The book itself records the pleasures of reading, the outdoors, fly-fishing and waterfowl. However good, or bad, he was considered to be in his role as the country’s foreign secretary, it was these things that he was passionate about. It was with great sadness that his death is recorded in the Natural History Societies Council Report of 1933 – 1934 and his presence was undoubtedly missed. 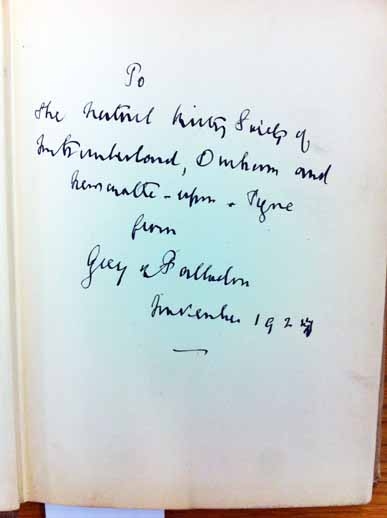 For more information on Viscount Grey of Fallodon and his links to both the First World War and his love of the outdoors in Northumberland, visit the Great North Museum: Hancock Library. The previous books mentioned that were written by the man himself are available for reference as are a number of biographies which give more detailed information on his life. 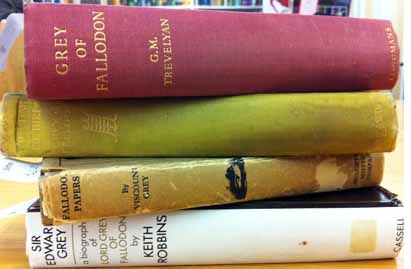