My last blog looked at the exploits of George Cuthbertson, a marine engineer from South Shields. He and his fellow crew members on board the oil tanker ‘Sunik’ saved the vessel after she was torpedoed by a u-boat near Messina Harbour, Sicily. His story is unusual amongst our collections in that it gives us a glimpse of the War beyond the North East. It’s also a testimony to the courage shown by so many men during the First World War.

It shouldn’t be forgotten, though, that it wasn’t just men who were taken away from their families and the security of home. The War also had the same effect on one particular group of women – nurses. This was brought home to me following a recent donation to the Archives of the papers of the Briggs Family of Whitley Bay. This new collection is small in size but contains fascinating records of the War service of the solicitor Albert Briggs and his first wife, Annie Hamilton, who worked as a nurse during the First World War. 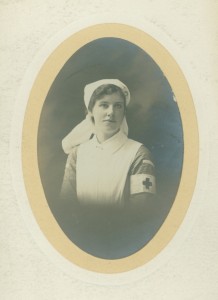 Annie Hamilton was born in Whitefield, near Manchester in 1889.  By 1911 she was working as a milliner in Lytham and training to be a nurse. During the First World War she served at Lord Derby Hospital, Warrington, Lancashire before moving in 1916 to the 3rd Northern General Hospital at Sheffield. The Briggs Family papers include a fascinating series of photographs relating to her time there and these images are available online in one of our new flickr sets. 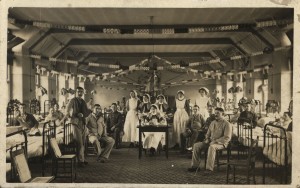 The photographs reflect the dedication and care that so many nurses showed in helping soldiers to recover from the devastating physical and mental scars inflicted by the War. The nurses didn’t just look after their bodies, they also cared for their minds, comforting and entertaining the soldiers as needed. There’s no better example of this than the photograph of the sisters and nurses dressed up to put on a Christmas performance at the Hospital for their boys. 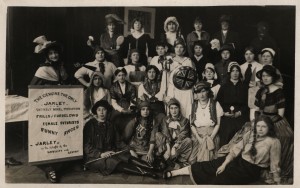 In 1917 Annie Hamilton seems to have moved from Ward 26 to the nearby Longshaw Lodge Convalescent Home for Wounded Soldiers, Grindleford. There are a number of great images taken there showing the nurses interacting with the patients. These convey a real sense that the nurses treated the men not just as patients, but as friends. It must have been a great comfort to many of the soldiers to feel this warmth and kindness after the harsh realities of life in the trenches. 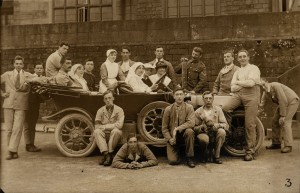 1917 saw more horrendous casualties for the British forces following the Third Battle of Ypres (Passcendale). At around this time Annie Hamilton was transferred to France to the 59th Northern General Hospital at St Omer. The Briggs collection includes images of soldiers she cared for at the Hospital, including this one of Driver Arthur Stansbury, who sent this card after his return to London thanking Nurse Hamilton “for a happy time while a patient in 59th General Hospital, St Omer, France”. 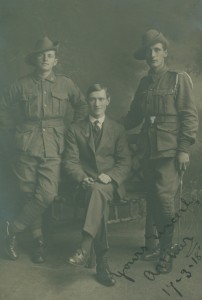 The collection also includes a remarkable autograph book kept by Annie Hamilton while she served at the 59th Northern General Hospital. The autograph book includes poems and drawings by various soldiers she nursed. Some of the cartoons reflect the humorous banter between nurses and patients. 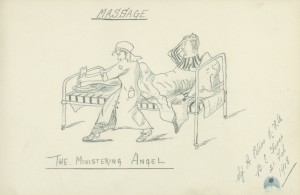 Others, however, tell a much sadder story of the difficult emotions faced by some soldiers returning home on leave. 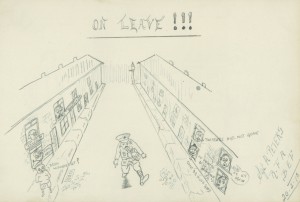 These records have been catalogued and can be seen by visiting our searchroom as well as online.  A big thank you goes to the donor, who very kindly brought these documents down from Scotland. The Briggs collection is an exciting addition to the Archives and we’re delighted to be able to share it with the wider world.