I recently came across a fascinating document, which relates very nicely to the forthcoming exhibition at South Shields Museum ‘Home of Heroes’. The item is a poster listing all those recognised by the Jarrow War Heroes’ Fund between October 1917 and July 1920. At some point in the distant past (before it was deposited with the Archives) the poster has been mounted on board and varnished, which explains the sheen you can see in the image below. 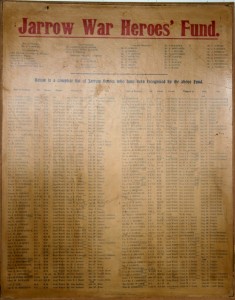 The poster will be of interest to a wide variety of people, particularly those with family ties to Jarrow. At the top it shows the names of officials and committee members of the Jarrow War Heroes’ Fund. 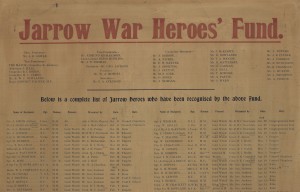 Next comes the most important part – the details of 124 of Jarrow’s First World War heroes, listed in the order in which their service was recognised by the Fund. The poster gives the name of each person, including their military rank, regiment, honours and the present they were given by the Fund. It also tells us when, where and by whom each presentation was made.

The lists have been reproduced in full below, in two sections. 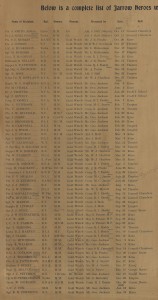 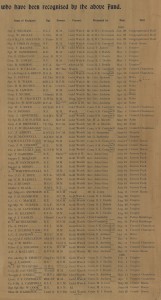 If you click on the images and look closely you’ll notice that a small number of the heroes are listed as ‘killed’. In each case an entry has been made of the relationship of the family member who received the present.

Details of two soldiers represented by their mothers at a presentation ceremony on 11 October 1917 (TWAM ref. T27)

Most of the men or their relatives received gold watches from the Jarrow War Heroes’ Fund and it would be fascinating to know whether any of these still survive in family hands.

The majority of the men on the list were awarded the Military Medal, but other honours include the Distinguished Conduct Medal, Meritorious Service Medal and the Croix de Guerre (a French military medal). Many of those recognised by the Fund were men who survived the War and it’s great that their heroism was rewarded. Quite rightly a lot of emphasis tends to be put on those who lost their lives in the conflict but the bravery of those who returned should not be forgotten either. It must have been so hard for them to return home to a normal life after all they had seen and endured.

I was also intrigued to note the last name on the list, Miss M. Harrison, who was awarded a gold watch and strap on 28 July 1920 for her service in the Land Army.

She is the only woman on the list but her inclusion highlights the part that women played working on farms and in factories during the War. Their contribution might not have been fully appreciated at the time but women played a key role in keeping the home front and the front lines supplied while the men were away fighting for their country. This is not to mention their heroic service as nurses. This reflects one aspect of the poster, which makes me slightly uncomfortable – knowing that there were many other Jarrow men and women whose courage and dedication has not been recognised. I’m optimistic, though, that in the coming First World War commemorations their stories will also be told.

If you can tell us more about one of the 124 heroes on the list or know of someone who should have been recognised but wasn’t then we’d be delighted to have your comments. Alternatively you could make sure their lives are remembered by adding them to the Imperial War Museum’s Lives of the First World War website.

The Jarrow War Heroes’ Fund poster will be on display in the ‘Home of Heroes’ exhibition at South Shields Museum. I’m really looking forward to seeing the exhibition, when it opens later this week. Further information can be found on the Tyne & Wear Archives & Museums website.