The shipyard of R. & W. Hawthorn Leslie at Hebburn built many fine ships, perhaps none as admired as HMS Kelly. However, during the First World War the firm built a torpedo boat destroyer, which also has a special place in British history. That vessel was HMS Verdun. 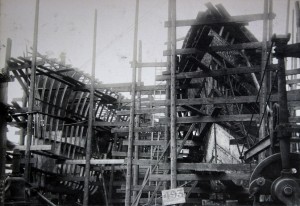 HMS Verdun and HMS Versatile under construction at the Hawthorn Leslie shipyard, Hebburn, 5 May 1915 (TWAM ref. 4471/3)

HMS Verdun was one of many warships that Hawthorn Leslie built for the Admiralty. During the First World War alone the firm built 2 battleships, 1 battle cruiser, 5 light cruisers, 3 destroyer leaders and 25 torpedo boat destroyers. These and other warships built by Hawthorn Leslie, which served in the War, are remembered in a new Flickr set just released by Tyne & Wear Archives.

What marks HMS Verdun out, though, are her particularly strong connections to the First Word War. The most obvious one is that she was named after the Battle of Verdun, the longest of the War, fought on the Western Front from February to December 1916. This terrible battle cost the lives of around 300,000 French and German soldiers with many more seriously wounded. HMS Verdun was laid down on 13 January 1917 less than a month after the battle ended and she was launched on 21 August 1917. 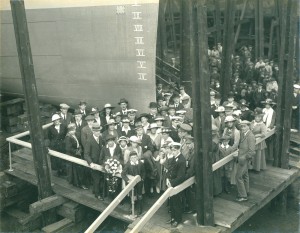 HMS Verdun was completed in November 1917, one of three Admiralty ‘V’ class destroyers built at Hebburn (the others being HMS Versatile and HMS Verulam). During the final year of the conflict she served with the Royal Navy’s 13th Destroyer Flotilla. The Flotilla was attached to the Grand Fleet until March 1918, when it became part of the Battle Cruiser Force.

HMS Verdun’s other major link to the War came in November 1920, after the conflict had ended, when she was given the honour of carrying the body of the Unknown Warrior back to Britain. The Unknown Warrior, buried at Westminster Abbey, has huge symbolic importance as the representative of all the soldiers, sailors and airmen who lost their lives during the War. The journey of the body to British soil on 10 November 1920 was linked to the commemoration of the second anniversary of the Armistice.

The coffin of the Unknown Warrior spent the night of 9 November being watched over by British and French soldiers in the thirteenth century castle at Boulogne before being transferred with great respect and ceremony to HMS Verdun. The events are described in great detail in the following day’s ‘Yorkshire Post’.

“At a quarter to eleven the procession began to move towards the harbour. The massed drums thundered out the opening bars of Chopin’s ‘Funeral March’, which was taken up by the bands along the entire route. When the harbour was reached the Verdun which had arrived somewhat late owing to fog, was lying alongside the jetty. On her after-gun platform gleamed the proud motto of the ship: “On ne passe pas”. The crew of the ship were drawn up facing the jetty and presented arms on the arrival of the wagons containing the body.

There was a short pause before the coffin was carried on board. Marshal Foch and General Macdonagh both delivered short speeches extolling the work of the British and Allied armies, and underlining the deathless significance of today’s ceremony. Then the body was taken up by its escort of British soldiers representing all parts of the Empire and carried on board. As it passed over the gangway the boatswain’s mate piped the body on board with honours generally accorded to admirals and captains. General Macdonagh and his aide-de-camp followed, and the many wreaths were taken on board and laid around the coffin, which had been put on the quarterdeck with four soldiers standing with reversed arms around it. Another general salute was given by the troops, and Marshal Foch advancing almost to the water’s edge stood alone saluting his dead comrade.  The Verdun unmoored and slowly glided away from the pier. As she moved away into the mist one could hear the guns of her escorting French flotilla fire the Field Marshal’s salute of nineteen guns”. 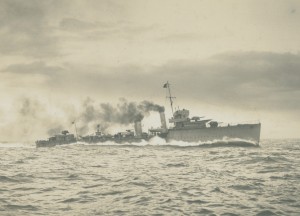 HMS Verdun was met in the Channel by a flotilla of British warships, which escorted the ship to Dover. The Yorkshire Post once again describes the scene:

“The thunder of the salute of nineteen guns fired by the RGA from Dover Castle heralded the arrival of HMS Verdun in Dover Harbour. The Verdun was brought alongside the Admiralty Pier about one hundred yards from the Marine Station and six warrant officers representing the Navy, the Marines, the Army and the Air Force, all of whom had seen considerable war service, went on board to act as bearers.

One by one the massive wreaths were reverently removed from the coffin and on the shoulders of six stalwart bearers the remains of the unknown soldier were brought to shore. As the last echo of the guns died away the band of the Royal Irish Fusiliers played Elgar’s ‘Land of Hope and Glory’. The passing of the coffin from the quarter-deck of the Verdun was honoured by a salute of bluejackets who stood in line with their arms at the ‘present’ and with a mournful dirge of the bosun’s pipes the Verdun’s share in the Empire tribute was ended”.

The coffin was then taken in a special train to Victoria Station and remained there overnight before the burial on 11 November with full military honours at Westminster Abbey. You can view a short film of the return home of the Unknown Warrior on the British Pathé website http://www.britishpathe.com/video/armistice-day-1920-aka-armistice-day-in-london.

HMS Verdun went on to serve in the Second World War, escorting convoys along the east coast to protect against German U-boat and E-boat attacks. After the War HMS Verdun was broken up but her important role in national events was not forgotten and the ship’s bell was preserved and later presented to Westminster Abbey where it now hangs near the grave of the Unknown Soldier.

Many thanks to Ian Rae for bringing the story of HMS Verdun to my attention and for passing me a copy of the ‘Yorkshire Post’ report.