On 4 August 1914 Britain entered the First World War. Events moved swiftly over the following months and I thought it would be interesting to take a look at them through the eyes of someone who lived through those turbulent times – Alfred Grundy, Headmaster of Whitburn Junior Mixed School.

Grundy was in charge of Whitburn Junior School for over 40 years from 1877 to 1920. As a head teacher his responsibilities included keeping a weekly record of school events in a log book.

The Archives holds hundreds of log books for schools in Tyne & Wear but those for Whitburn are special because of the many fascinating details that Alfred Grundy added to his entries.

“England is at War … From Roker to Marsden the 1st L & Y Regiment [York and Lancaster Regiment] are watching night and day behind entrenchments. The Cleadon Hills are occupied by heavy guns and are guarded night and day”.

Grundy’s observations about troop mobilisation at Cleadon are confirmed by the minutes of South Shields Rural District Council. These reflect how the sudden arrival of large numbers of troops took the Council by surprise. The minutes of a Special Council meeting on 10 August 1914 state:

The Surveyor reported that rough wood should be got to provide Latrines for the men in several places where they were exposed to the public gaze” (TWAM ref. UD.BO/1/9 p326).

These discomforts might seem ‘beyond the pale’ to many of us but would be a minor inconvenience compared to the harsh realties of trench life that many of the men would later experience.

Back to the Whitburn Junior school log book, though, and in his next weekly entry on 17 August 1914 Grundy writes:

“Scores of thousands of visitors have viewed the entrenchments between Sea Lane and Whitburn and the marching and moving of Khaki clad soldiers, singing as they go, has created quite a military air in the usually quiet village. In all other respects it is “Business as usual”, while about two million soldiers are facing each other on the coasts of Belgium, and it is supposed that our Fleet is holding the German Fleet in the Kiel Canal”. 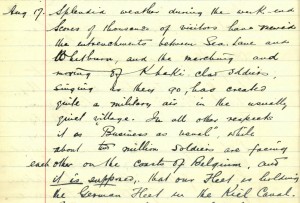 In the log book Grundy gives detailed updates on the progress of the War on land and at sea, reporting what he has presumably read in the papers. The entry of 2 September 1914 certainly reflects the anti-German propaganda and sentiment of the time.

“The Fleets had a preliminary encounter in the Heligoland Bight. Three German Cruisers were sunk and the rest crept back into the Kiel Canal.

The Germans covered themselves with infamy by burning the small town of Louvain with its priceless books, manuscripts and pictures. The paths of the German armies are marked by bloodshed, rapine and robbery. Old men and women – women and children being ruthlessly done to death, while there are many reports of the violation of girls”. 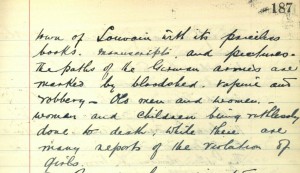 “The 1st glorious “Victory” of the German Fleet took place last week a squadron having captured and sunk 15 fishing vessels in the North of the North Sea and taken the fishermen prisoners to Wilhelmshaven. HMS Pathfinder was sunk by a mine 30 miles from the coast.

The Call to the Flag has been well responded to, over 300,000 having now been received. 500 are at West Hall and a Battery of Artillery is at Cleadon.” 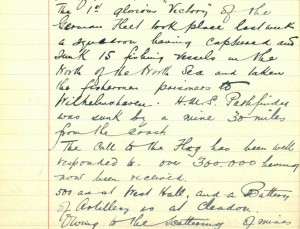 Grundy’s reports in the early weeks of the War certainly seem to present a very rosy picture of events, reflecting perhaps the popular attitude that it would all be over by Christmas.

“A great fight is taking place between the German Army and the Franco-Anglo Army. The Germans have been compelled to retire a distance of ten miles with great loss of men guns and ammunition. Provisions are no higher in price, owing to the fact that our Cruisers keep open the main lines of seaborne goods from all over the world” (8 September 1914).

“The German retreat has become a rout. They are now 65 miles from Paris and our French Allies and ourselves are giving them no rest … The Belgians with their brave little force have driven the Germans out of Belgium” (14 September 1914). 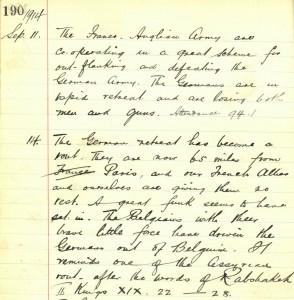 The War impacted the school directly in a number of ways, such as the call-up of staff on active service. Grundy’s entry on 15 September documents the emotional departure of Frank Orr, one of the teachers.

“On his return to School this afternoon Mr Orr showed me a communication he had received from his commanding officer desiring him to report himself at once at headquarters. Mr Orr having been trained in the Bede College Company had offered himself for Active Service.

Accordingly directly Grace had been sung the Master addressed the School stating that Mr Orr had offered himself for Active Service to fight for his King, his country, our mothers, our sisters and our children; that we ought to be proud of him and glad that he felt so full of that patriotism for which his native County of Cumberland had long been noted; that we hoped the Great God would send him back to us well and whole in mind and body.

‘In the name of the Teachers and Scholars’ the master said ‘I wish you God-speed, good luck, good health and a safe return’.

Three Cheers were given for the King, three for Mr Orr, the National Anthem was sung. Mr Orr simply said ‘I thank you’ and went off to pack his things and report himself at Durham”. 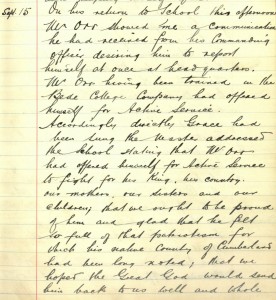 The school log book gives us a fascinating insight into attitudes and perceptions in the early weeks of the War. I hope to bring you some more entries from it in due course. If you’d like to take a look at the school log books we hold then why not visit our public searchroom. Details of the schools records we hold can be found in our user guides. Opening times and our location can be found on our website. An excellent account of Mr Grundy’s time at Whitburn has also been written by Sybil Reeder – ‘A Victorian Village School’ (published by South Tyneside Libraries).

One Response to First World War Stories: A headmaster’s view of the War’s first months