In an earlier blog I looked at the first two months of the First World War through the eyes of Alfred Grundy, Headmaster of Whitburn Junior Mixed School. Grundy’s weekly entries in the School log book give us a fascinating insight into how the War was seen at home and I thought it would be interesting to share some more of his thoughts.

Grundy was clearly frustrated by a lack of official information about the War. He noted on 16 October 1914 that “The War is going on and we in England know little news. The last dispatch made public was from Sir John French dated Sept 7”. The headmaster also refers to the propaganda battle taking place between Britain and Germany.

“The Gigantic battle is still being waged in N.W. France. The Germans have been reinforced by 600,000 men many of them veterans, others lads 16 or 18. They claim during the week-end to have driven back the Franco, British & Belgian Army at one point as much as 2 kilometres but the Allies claim an equal withdrawal of the enemy on another part. The German Emperor says “To Calais at any price” his malice being evident” (entry for 24 October 1914). 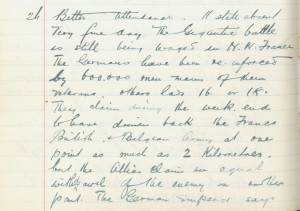 Grundy’s sense of anger towards the enemy really comes across in his entry for 2 November 1914.

“During the week-end Turkey has thrown in her lot with Germany. Bought with German Gold, her little fleet manned by German officers, doubtless believing the never ending line of false news disseminated by Germany she bombarded several innocent villages without War being declared. When the war is over there will be no Turkey in Europe”. 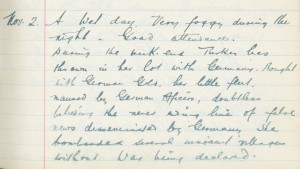 The log book also gives us a glimpse of life at home, where there was real fear of an imminent attack or invasion.

“The soldiers billeted in Whitburn and the neighbourhood have been on the alert during the last week. No man was allowed away from his billet on several nights and on one day the trenches were manned from before daylight till dark at night” (12 November 1914).

On 18 November Grundy received news that a contingent of soldiers from the 4th Battalion of the Argyll and Sutherland Highlanders were to arrive and occupy the school. As a result children who usually attended Whitburn Junior Mixed School had to travel to Cleadon School where they were taught each morning from 9 until 12. A sense of fear and anticipation must have grown as preparations were made to defend the coastline.

“The Highlanders are making trenches and covers, barbed-wire entanglements are fixed on the coast from Rackley Way to the end of the Promenade at Roker. 4.7 and 6 inch guns, with machine guns in between are fixed at intervals from the Bents to Sea Lane, boats have been sunk at the North and South entrances of the Wear and Whitburn inhabitants are not allowed to walk along the coast to Roker without a pass, and there are 30,000 soldiers in Sunderland and the neighbourhood. The High Tides were supposed to present an opportunity for a German Raid, with flat-bottomed boats and the Trenches were occupied night and day, the General Staff under General Pink ordering and controlling and commandeering everything” (23 November 1914). 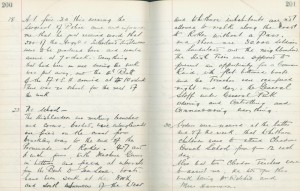 When the raids did come the following month, they occurred further down the coast with tragic consequences.

“This morning some of the German fast cruisers have bombarded Hartlepool, Whitby and Scarborough. More than a hundred lives have been lost, many of them being children and women, and as usual the churches have suffered. Whitby Abbey and one of the Hartlepool Churches suffering severely. The coast was partly guarded by patrol destroyers, but they were slow and their guns were too light to do any damage to the enemy.

There has been great indignation all over the world at the contravention of the Hague Rules, but the country soon subsided into the ‘Business as usual’ policy and now it is scarcely mentioned” (16 December 1914). 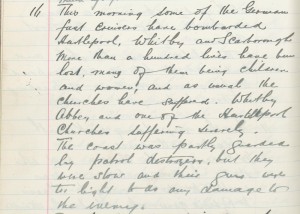 By the start of 1915 the log book rarely refers to school events. Even when Grundy is writing about the weather at home, his mind wanders back to the conflict across the Channel. On 18 January 1915 he writes “Very bad weather. Bad for the children travelling to Cleadon and worse for the troops in the trenches in Flanders”. He strikes a defiant note in his weekly entry on 15 February, writing:

“… the Germans are feeling the grip of the British Iron clads so terribly that they have issued a warning note to all powers whether belligerent or neutral that after February 18th, any ship found in British water whether neutral or otherwise will be unconditionally sent to the bottom without search and without any attempt to save life. As Germany’s fleet is locked up and as she has only 25 submarines all told, the Blockade of Britain, as it is called is only a paper one. Nevertheless we must be prepared to endure some shocks”.

The War came closer to Whitburn in April with a series of air-raids. Grundy notes in his entry for 15 April 1915:

“Last night the Tyne was visited by Aeroplanes or Zeppelins. It was intensely dark about 8.30 when the first sounds of the exploding bombs were heard on the Tyneside. Wallsend and Newcastle would seem to be the principal places of attack so far as can be learned this morning, but the news, considering the nearness of the raid, is very scanty, one paper stating that no damage was done. Altogether the report says 13 bombs were dropped in Wallsend, Jarrow, Newcastle and Chollerford. The direction of the Airship as it came from Hebburn and Wallsend shows that it must have passed over the north part of the parish”.

“During the week-end a Zeppelin has visited our District. It was visible off Flamborough at 8.30 … It passed over Bridgett’s in Moor Lane at 10, proceeded to Jarrow, dropped bombs on the Jarrow shipyard (Palmers) killing 15 and injuring 15. It then turned as if coming towards Sunderland when the guns on Cleadon Hill opened fire and got so near that it put on speed and put off seaward followed by two British Aeroplanes. I saw the explosion of the two bombs on Jarrow and also the firing of the guns on Cleadon, and when it hurriedly sheared off I saw the lights as it passed off to the North Sea” (21 June 1915). 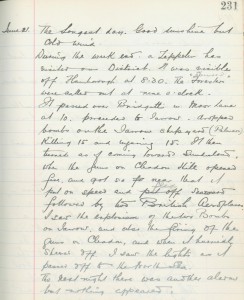 On 15 February 1915, when writing about the German u-boat threat, Grundy had written that “… we must be prepared to endure some shocks”. Tragically he was proved right just three months later. On 3 May 1915 he noted:

“The Lusitania on the point of sailing from New York was warned that the Germans would attempt to destroy her and that anyone going on board did so at the risk of his or her life. No notice was taken and every single passenger decided to make the journey”.

A week later on 10 May Grundy recorded the tragic news of the sinking of that great Cunard ocean liner.

“That which was threatened has happened. On Friday afternoon 2.33 the Lusitania being about 8 miles from the Irish Coast, Kinsale Head, steaming about 15 knots, a good watch being set, a cry was made that a torpedo was coming. That one missed but soon after another came catching the great liner amid ships, killing over 100, and in less than 30 minutes the vessel sunk, some six hundred being saved and nearly 1500 drowned, 30 of whom were babies”. 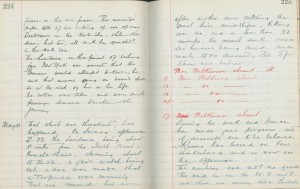 The numbers quoted by Grundy don’t stand up to later analysis (the number of people drowned was nearer 1,200) but that doesn’t detract in any way from the tragedy or the magnitude of the event. The loss of so many civilian lives (including over a hundred Americans) was to prove significant in gradually changing US opinion about joining the War.

The school log book gives us a fascinating insight into attitudes, perceptions and events during the first year of the War. I hope to bring you some more entries from it in due course but if you can’t wait and would like to take a look at the original log book then why not visit our public searchroom. Opening times and our location can be found on our website.