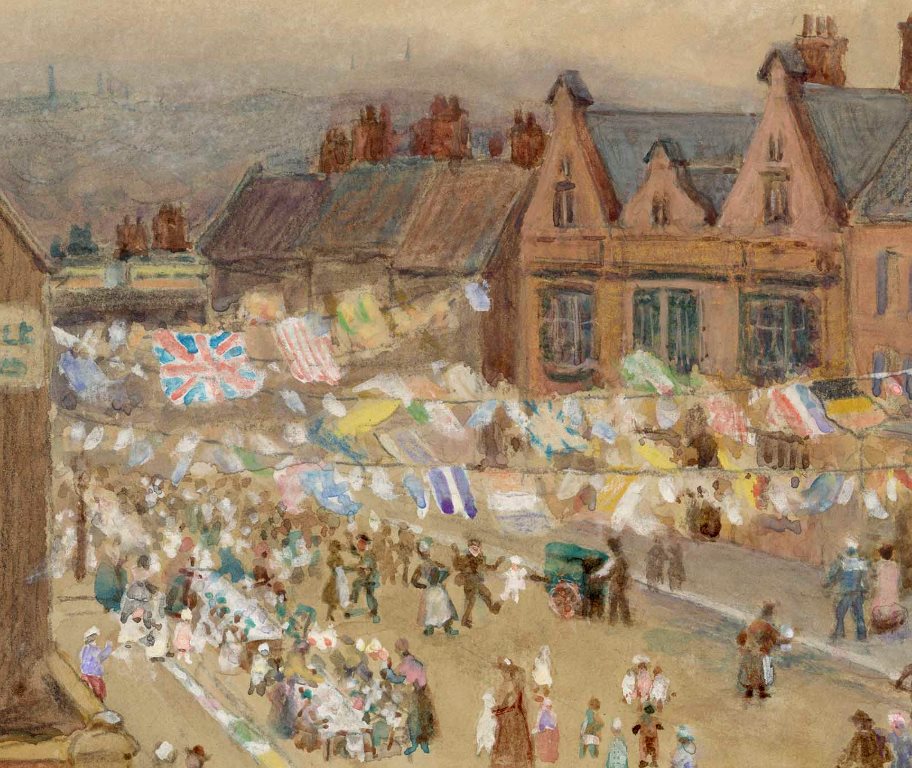 There was an absolute craze for street parties in Newcastle in August 1919 to celebrate the signing of the Peace Treaty on June 28th – the official end of the First World War. There were a few ‘Peace’ and ‘Victory’ tea parties in July, but they really took off in August, when a heatwave coincided with the children’s school summer holiday. The Peace Treaty was followed by thanksgiving services, music concerts and celebratory dinners in Newcastle, as well as a big Victory Parade on July 19th. But all this was rather formal and grand. The tea parties were a chance for ordinary people to celebrate peace and give children a treat after the long years of the war. 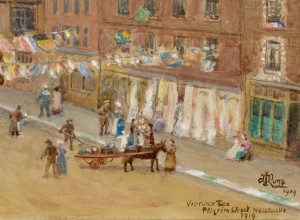 For many of the parties, the flags of Britain and her allies were strung across the streets, and shop windows might be decorated with strips of cloth or paper. Even the kerb stones have been painted for this celebration pictured in this scene.

The only ‘Victory’ tea party in Pilgrim Street I have seen reported in The Evening Chronicle of 1919 was the Eldon Mission Victory Tea Party, which was attended on August 5th by 330 children from poor families. That evening, the Lord Mayor and City Corporation held numerous tea parties across the city, catering for nearly 6,000 poor children in total. As well as having tea and songs, they were given an ‘artistic souvenir card’ with photographs of the King and Queen and wartime leaders, and a message from the Mayor. Evening parties meant that helpers who were working during the day could attend, and streets were quiet so they could put out tables. The evenings would have been light until late on at that time of year, and the weather was warm. The Eldon Mission Hall was a bit further down Pilgrim Street, the other side of the railway viaduct (though still close). However, because the street sloped steeply there, maybe the party was moved up the street to a comparatively flat area. 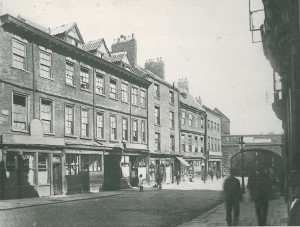 We can’t see the buildings where the tables have been set out in the watercolour, but this photo from about 1900-1920 shows what this area of the street looked like (photo © Newcastle Libraries, ref 003937). 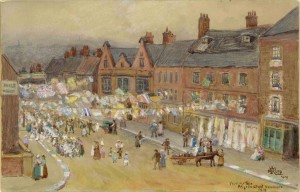 John Joseph Potts sketched the scene from a window on the side of the Royal Arcade, where he had an office. He was an accountant, and spare-time artist. His watercolour shows a little scene from Newcastle’s history. It also records a view that has disappeared for ever. 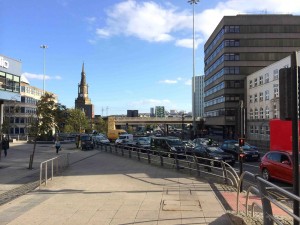 The right side of this photo is roughly the modern-day equivalent of Potts’s view. The tall dark office block replaced the building with decorated triangular gables. I took the photo from the big roundabout complex which occupies the space where the Royal Arcade and surrounding buildings previously stood. 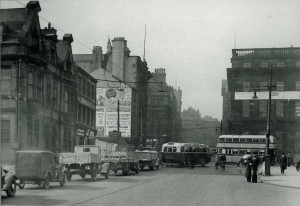 Here’s Pott’s vantage point – the Royal Arcade, viewed from the side, on the right of the photo (we’re now looking up Pilgrim Street towards the city centre). The part of the street where the party took place had already been demolished by the time of this photograph, taken in 1937, leaving a curving pavement and widened roadway in its place. However, you might recognise the building with decorated triangular gables, which appears in Potts’s watercolour. (Photo © Newcastle Libraries, ref. 37282.) 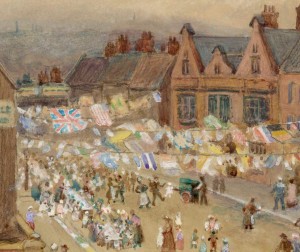 In the watercolour, a train is going over the rail bridge above the lines of flags. The bridge is the only part of the view that remains today, though the structure has been remodelled to allow the Tyne Bridge approach roads to pass underneath. We can see how the roofs on the other side of the railway bridge drop away, as the street at that time sloped steeply down towards the Quayside. 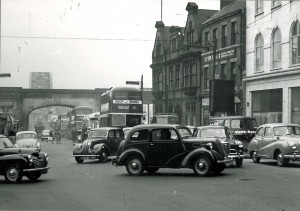 The area is recognisable in a 1959 photograph (© Newcastle Libraries, ref 47149). However, the steep section of Pilgrim Street beyond the viaduct had gone by the time of the photo, and the road had been re-routed and flattened out quite a lot to create the approach to the Tyne Bridge.

John Joseph Potts’s watercolour of the Pilgrim Street tea party is on show until October 19th at the Laing Art Gallery. From October 25th until June 28th 2015, it will be displayed at Discovery Museum in When the Lamps Went out: Life on Tyneside in the First World War, with photographs of other street party celebrations of the time.