After years of austerity during World War II, the following era could be characterised by the revival of Haute Couture.  The structured square shoulders and shorter skirts of the war years were replaced with the softer feminine silhouette, rounded shoulders and fitted waists of the ‘New Look’. This ‘New Look’ was synonymous with Christian Dior whose first collection; the Corolle line, in the Spring-Summer of 1947, would set the trend for the next decade and forever be remembered in fashion history. 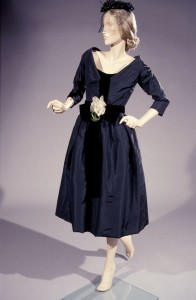 Although the style of the ‘New Look’ was a significant chapter in fashion history, the look was actually not that new. The style was an exaggerated take on the fashion trends of the late 1930’s and the occupation styles. Clothing was no longer as square or structured in appearance as the styles of the 1940’s; however, the softness of the ‘New Look’ silhouette was deceiving.  The curved shoulders and full skirt of Dior’s clothes relied on an inner construction of new interlining materials to shape the silhouette. A result of the Post-World War II economic expansion was a flood of synthetic fabrics and easy-care processes. Drip-dry nylon, orlon and dacron, which could retain heat-set pleats after washing, became immensely popular in the period. 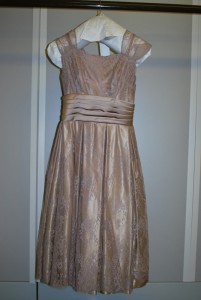 For some of the war weary population, the ‘New Look’ symbolised hope for a new and more prosperous future, however others saw it as a reckless waste, when fabric was still in such short supply. The long billowing skirts; in some cases reaching to the ankle, required as much as fifteen yards of fabric! 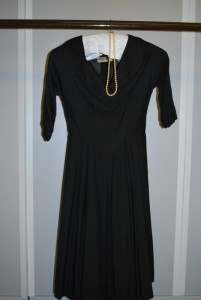 Not only did this extensive use of fabric worry much of society, but some women  feared the obvious femininity of this new style, heralded a return of women to  the home and a less active role in society after years of wearing more functional clothing appropriate for work. Despite this very mixed response to the ‘New Look’, it would dominate the design of women’s clothing until the mid-late 50’s. 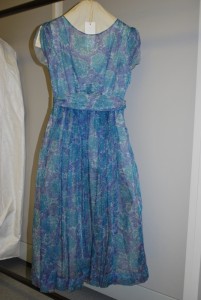 For many women, the 1950’s brought with it a desire to appear elegant, mature and sophisticated. High fashion was still very formal and required clothes and accessories such as gloves and pearls for every occasion.

Tailored suits and twinsets with fitted peplum jackets, usually worn with long, narrow pencil skirts were very trendy for day wear. Day dresses with fitted bodices, full skirts, and low-cut necklines or peter pan collars, were also very popular, as were halter-top sundresses.  Evening gowns were often the same length as day dresses which was referred to as the ballerina length. Cocktail dresses for evening parties’ were often paired with short shrugs and bolero jackets in matching fabric. 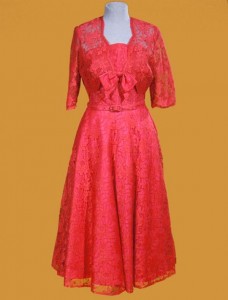 The styles and shapes of this era have a classic and timeless feel to them which evokes femininity and sophistication. The cinched waists, rounded shoulders and full skirts of this significant look have been recycled in many ways throughout contemporary fashion and it is likely they will continually reappear in the future.

One Response to Fifties Fashion…