Since my last blog in late April work has been going well on the ‘We Mak’em’ Sunderland Shipbuilding archives project. Colin and I have both been working on the project’s biggest collection – the records of William Doxford & Sons Ltd. Colin has been busy listing the many ship plans we hold for the firm, while I’ve been cataloguing its administrative records.

These administrative records include several series of desk and pocket diaries kept by directors and other leading members of the firm. Of particular interest are a series of 27 desk diaries kept from 1914 to 1941 by Karl Otto Keller. They are a complete set for those years, with the exception of 1938 for which no diary has survived. Keller is credited with the development of the Doxford Opposed Piston Oil Engine. This engine proved hugely successful and in addition to the hundreds built by Doxfords, many hundreds more were constructed by other companies in the United Kingdom and abroad under licence from the firm.

Keller was Swiss, born in Zurich in 1877. He came to England in 1903 and within a couple of years was appointed by Doxfords to work on internal combustion-engines. He left after four years to join William Reavell & Co. Ltd of Ipswich but returned to Doxfords in 1911 as Chief Designer. 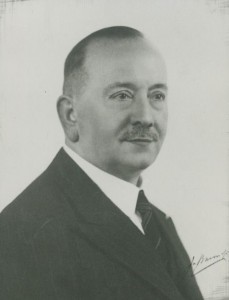 His diaries give us a unique insight into the development of an important marine engine. There are plenty of technical details documenting the testing of the engine in the build up to its continuous trial under the supervision of Lloyd’s Register. This key trial started on 16 November 1914 and lasted for over 34 days before finishing on 21 December. When testing was completed on the 35th day Keller was clearly content. As he notes in his diary “Opening out proved most satisfactory result, no defects anywhere”.

The First World War brought with it a wave of intense anti-German feelings and despite the fact that Keller was Swiss he was not immune to these events. He mentioned this in his diary entry on 14 May 1915 when he noted “Deputation from the men went to see Mr Ernest [Doxford] regarding my nationality”.

These problems were felt at all levels of society. This is reflected by King George V’s decision to change the family name from Saxe-Coburg-Gotha to Windsor in 1917. By coincidence that was the same year that he visited the Doxford premises. 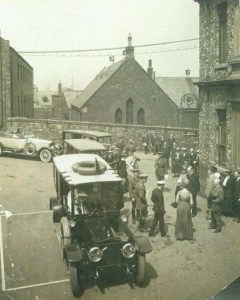 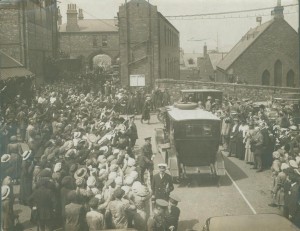 Keller doesn’t express his emotions in his diaries so I can’t tell how much the questions of his nationality affected him. The subject was raised in less difficult circumstances at the opening of the North East Coast Exhibition of Industry, Science and Art on Newcastle’s Town Moor on 14 May 1929. In his entry for that day Keller gives a short account of his introduction to the Prince of Wales in the Palace of Engineering.

“Mr Charles [Doxford] and self were introduced, Prince asked me, have you built the White Star diesel liner ‘Alcantara’, no Sir built by Harland & Wolff, where are you from – Doxford Sunderland – but you are not English – no Sir, Swiss – oh, oh, oh, fine show here”. 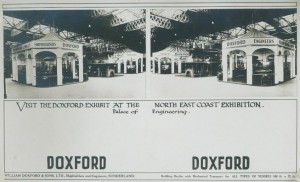 Advertisement for the firm's exhibit at the North East Coast Exhibition (TWAM ref. 1811/175/1)

The diaries allow us fascinating glimpses of the running of the Doxford Engine Works and the pressures on it. A particularly interesting entry on 31 March 1916 shows how the demands of the war effort brought other work to a halt. The entry reads:

“Mr Ernest [Doxford] & Mr Robert [Doxford] called at the Admiralty & were informed that our submarine engine would not assist in the present war & therefore must not be proceeded with any further until all parts for Destroyers are completed”.

There are also interesting entries referring to visits, meetings and labour disputes. An entry on New Year’s Day 1941 hints at some difficulties in labour relations, with Keller noting:

“By Government request all men on work of national importance should be at work. No men turned up for last night shift nor day shift”.

More sinister is the entry for 5 July 1941 containing a mention of “Sabotage by inserting steel drillings” (TWAM ref. DS.DOX/2/2/27).

Keller’s diaries are interesting on many levels – personal, local, national and international. Keller is significant not only as a marine engineer, but also an example of the positive achievements of immigration. Like the Czech engineer and entrepreneur, Miroslav Sigmund (whose personal papers the Archives also holds), he made significant contributions not just to the local economy but also to the national war effort. I hope that these diaries will be well used by many future generations of researchers.