The Archives holds thousands of collections, covering a wide variety of subjects. One subject that is not well covered in our collections but which has exercised the minds of writers and poets for hundreds of years is ‘love’. I’m delighted to report, however, that love is in the air at Tyne & Wear Archives following a fantastic recent donation of love letters dating from the interwar period.

These love letters were sent by William Wake (he signed himself as ‘Will’ or ‘Bill’) to his future wife Margaret (‘Madge’) Fisk, who was living in Lemington. William Wake was born in Jarrow in 1904. He was the eldest son of Joseph Dodds Wake and Barbara Johnson Wake. After leaving school he served an apprenticeship as a marine engineer and went on to work as an engineer with the British India Steam Navigation Company from the late 1920s. He met Madge around 1929 but they had to endure a long-distance courtship as he spent the next few years at sea in Southern Asia and Australia. 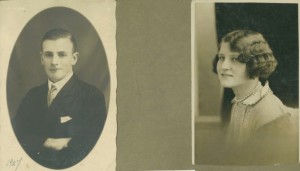 This separation must have been very hard for them both but has left us with a fascinating series of letters. Most of the letters cover the years of their courtship from 1929 to 1933. There are 48 letters for that period, many of them quite lengthy. As well as telling us about William’s feelings for Madge, the letters contain interesting details about life at sea and the places he visited. The style of the letters is very relaxed, humorous and affectionate which makes them fascinating for the insights they also give us about social attitudes and personal relationships.

From 1929 to 1931 William served as 4th engineer on the British India Steam Navigation Company ship ‘Quiloa’. 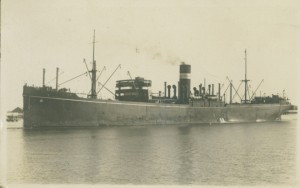 His letters include references to crew members and activities onboard ship as well as interesting details of his escapades during shore leave.  Life could clearly be tough – boredom and a very hot climate meant that tempers would sometimes fray. The letters refer several times to fights between the mates and the engineers. In a letter dated 2 May 1929 (TWAM ref. DF.WAK/1/3), sent from Melbourne, Australia, William mentions an ‘awful battle’ that happened the night before.

“The Chief Mate called us some rotten names (being the sod he is) & instantly our second engineer knocked him insensible & very nearly killed him whereupon the 2nd, 3rd & 4th mates together with 4 cadets came & tried to murder our second, of course we came out then, myself, the 3rd eng, 5th & Sixth the purser & the wireless operator, we well-nigh slaughtered the other side, they all ran into one of their cabins & locked themselves in …”. 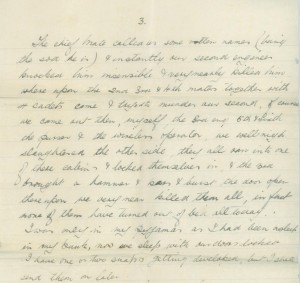 William was clearly well-travelled and often shared his thoughts and experiences of the places he’d visited. These include thoughts about places at home and abroad. He was very keen on Australia as a country but was less complimentary about the behaviour of its men. His comments on Middlesbrough in a letter written on 4 February 1930 (TWAM ref. DF.WAK/1/5) were also quite harsh.

“I know Middlesboro’ at night time along the Linthorpe Road & there’s not one of those girls that walk along that street a man could not hire for the night from 2/6 & upward … but honestly lassie, Middlesboro’ is one of the most immoral towns in England & the women are known to have no virtue (that is those you see strolling around)”. 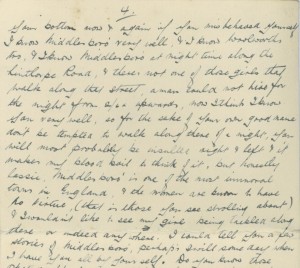 I hasten to add that this was just one man’s opinion!!  Prostitution is in fact a recurring theme in the letters. This is perhaps not surprising given that William would have spent a fair amount of time in and around dockyards, where prostitution was commonplace.  William even refers to visits by his shipmates to houses of ill-repute during shore leave.

The thing that shines out most from the letters is William’s great affection for Madge. Many paper kisses were exchanged in their letters to each other and William kept a close count on how many were owed. This is reflected in his romantic little U O Me note, found with a letter written in June 1930 (TWAM ref. DF.WAK/1/6).

Even though William was very much in love he clearly understood the sacrifices that Madge was making and showed himself to be a gentleman by offering her an easy way out. Writing on 9 March 1930 (TWAM ref. DF.WAK/1/5) he passed on the news that he would not be back until Christmas 1933 at the earliest.

“Isn’t that awful – now as I have said before if don’t want to wait – don’t. I know full well what will be missing by sticking to me, all the pleasures – dances – good times – pictures – etc etc & I don’t expect any girl to miss them & 3½ years is an awful long time & perhaps you will find some good looking chap you will like better than the wreck I am … but still Madge, I shan’t blame you & it’s better to tell me now …”. 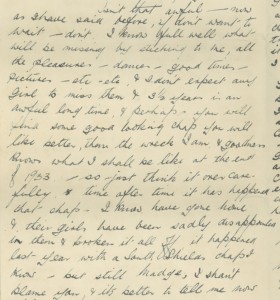 On several occasions William admitted he was tempted to jump ship and return home but knew that with no reference and little work back home he’d struggle to find a job. Despite the obstacles William and Madge’s long-distance relationship survived the test of time and in 1934 they finally married. Following their marriage they owned a newsagency in Throckley for a while before moving to London where they briefly had a small restaurant.

After the Second World War William and Madge emigrated to New Zealand with their daughter, Vivien, who has very kindly passed these letters to the Archives. Her generosity in donating them to us is very much appreciated.