Exploring the ‘Workshop of The World’

This month I’ve started work on a major project to catalogue our collection of the historic records of Vickers Armstrong and its predecessor companies. This will make all the documents fully available to the public for the very first time. Although the firm operated internationally most of these records relate to its activities on Tyneside from the 1840s onwards. The project is entitled ‘Workshop of the World’ a phrase often used to describe Britain’s manufacturing dominance during the Nineteenth Century. It’s a very apt description for the Elswick Works, which employed tens of thousands of men and built a wide variety of products for customers around the globe. 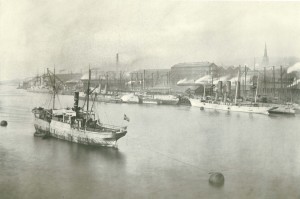 The remarkable scale and diversity of the firm’s achievements are neatly demonstrated by Peter McKenzie in his biography of Lord Armstrong (published by Longhirst Press, 1983). He explains how in 1876 the firm (then known as Sir W.G. Armstrong & Company) built thirty-one 100-ton guns for the Italian Government.

After the firm merged with the shipbuilder C.M. Mitchell and Company in 1882 a naval yard was established at Elswick. With the advent of the Elswick shipyard, as McKenzie notes, “Elswick was the only factory in the world – nationally owned or otherwise – that could build a man-of-war and arm it completely”. The yard went on to build warships not just for the Royal Navy but also for the navies of the world, including those of Argentina, Brazil, Chile, China, Italy, Japan, Portugal, Turkey and the United States among others. 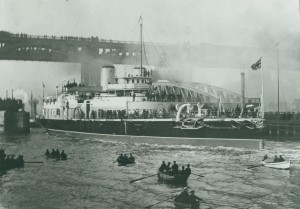 Most of the Vickers Armstrong material we hold isn’t catalogued and has lain undisturbed on shelves for over twenty years. 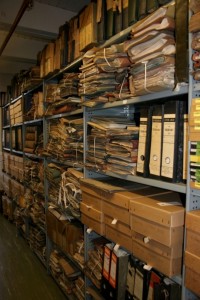 View of part of the Vickers Armstrong collection in our storage areas, February 2014

When a record office takes in a very large collection it’s not usually possible to catalogue it all straightaway. A task of that magnitude requires the dedication of at least one member of staff over a long period of time. That has now been made possible by the award of a grant of over £46,000 to Tyne & Wear Archives through the National Cataloguing Grants Programme for 2013.

My first job is to look through the unlisted material and sort it into a coherent order. As well as sorting the records I’m also repackaging them to help with their long-term preservation. This will involve placing papers in acid-free envelopes or folders and loose photographs in archival polyester pockets. This is essential to make sure that these unique documents remain in good condition for future generations.

One of the most exciting things about working on an unlisted collection is that you simply don’t know what you might find. As I sort through and catalogue the collection over the next two years I’m sure that fascinating documents will be unearthed and great stories will emerge. I’ll look forward to reporting these to you in future blogs so please watch this space!